It’s been quite the year in Seattle technology. Amazon.com kept growing. Microsoft kept transforming. And several startups raised huge rounds of cash as they looked to become the next Microsoft or Amazon.

In case your head was filled with too many Tweets and Facebook posts to keep up, here’s a handy look back at the biggest Seattle tech news events of 2012. As you can tell by the synopsis below, things really heated up in the second half of the year.

If we missed something big as we scoured the GeekWire archives, let us know in the comments. And make sure to vote in the poll below on the top news story of the year in Seattle tech.

— Double Down Interactive, the Seattle maker of casino-style Facebook games, agrees to be purchased by gambling giant International Game Technology in a deal that co-founder Cooper DuBois describes as “like every birthday and Christmas rolled into one.” Full story here.

— 520 tolls: Commuting techies in the Seattle region return from the holiday to a major change — tolling on the 520 bridge that connects Seattle to the Eastside homes of many of the region’s biggest tech companies. By the end of the year, the state was also considering putting a toll on the I-90 bridge, where much of the cross-lake traffic has gone.

— Microsoft says farewell to CES: Steve Ballmer gives the Redmond company’s final keynote address at the big Consumer Electronics Show in Las Vegas — but it isn’t so much a keynote as it is a stage show, featuring Ryan Seacrest and a “tweet choir.” Full story here.

— SOPA Protest: Operators of major web properties including Wikipedia, Google and others protest the Stop Online Piracy Act, better known as SOPA, calling it a misguided attempt by Congress that “could fatally damage the free and open Internet.” Ben Huh of Seattle’s Cheezburger emerges as a spokesman for the resistance, which ultimately prevails when the legislation is dropped. Full story here.

—Zillow buys RentJuice for $40 million, expanding its slate of tools for landlords and property managers. Marking one of a half dozen acquisitions that the online real estate company has made in the past two years, Zillow continued to expands its offerings beyond online advertising. Full story here.

—Facebook completes its highly-anticipated initial public offering at $38 per share, but critics are skeptical of the company’s lofty valuation and the stock goes into a tailspin, ending the year around $26 per share. Nonetheless, Microsoft’s initial investment of $240 million in Facebook, which expanded its engineering center in Seattle in April, looks like a smart bet by Steve Ballmer. Full story here.

—Madrona Venture Group raises a $300 million venture fund, beating out original targets of $250 million and marking the biggest fund for the Seattle firm since it was founded in 1995. The backer of Isilon Systems, World Wide Packets, Amazon.com and others says it will continue to pump cash into startups in the Pacific Northwest region. Full story here.

—The Space Shuttle trainer begins to arrive in stages at Seattle’s Museum of Flight, forming the showpiece of the museum’s new Charles Simonyi Space Gallery, which opened later in the year. Full stories here and here. 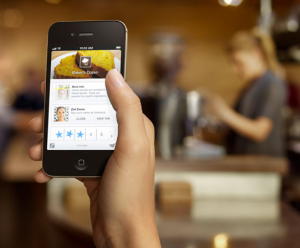 — Starbucks shakes up the world of mobile payments, striking a deal with Square to process transactions in its stores, and investing $25 million in the mobile payments company. Full story here.

— Solavei, a heavily-funded wireless service that rewards customers for signing up friends, co-workers and other acquaintances, launches service on the back of T-Mobile’s network. The Ryan Wuerch-led company later tops more than 100,000 members for the $49 per month cell phone service. Full story here.

—In one of the largest real estate deals of the year, Amazon.com cemented its position in Seattle when it agreed to buy its new South Lake Union campus from developer Paul Allen for $1.16 billion. The news came as the online retailing powerhouse continued to push forward this year with plans for three new skyscrapers on the edge of downtown, an architectural addition that could transform the city in the coming years. The new developments came as Amazon’s workforce mushroomed in 2012, topping 81,000 worldwide employees. Full story here.

—Newly-appointed T-Mobile USA CEO John Legere makes his mark, announcing on Oct. 3 that the Bellevue-based carrier, the fourth largest in the country, planned to acquire Metro PCS in a merger that would shake up the wireless business and give the combined company 42.5 million subscribers. Full story here.

—Microsoft releases the Surface, the company’s first personal computer, along with Windows 8, its attempt to re-imagine the operating system as we know it. Full stories here and here.

—In a surprise move, Windows president Steven Sinofsky steps down from Microsoft just three weeks after the release of Windows 8. The departure of 23-year veteran of Microsoft, known for his prickly personality and hard-charging ways, sets off waves of debate about the future of the company and where it is headed in the post-PC world. Full story here.

—Fast-growing daily deal site Zulily scores one of the biggest venture capital rounds of the year, pulling in $85 million in venture financing from Andreessen Horowitz and others at whopping valuation of $1 billion. Full story here.

— The topsy-turvy relationship between Sprint Nextel and Clearwire enters yet another phase as the country’s third-largest wireless carrier agrees to buy its longtime partner for $2.2 billion in a deal that some Clearwire investors say was too low. Full story here.

Which of these stories was the biggest? What did we miss? Let us know in the comments and in the poll below, which includes the some of the biggest stories from the list above.