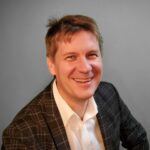 John Cook is the co-founder of GeekWire, a national technology news site and community.

As co-founder and publisher, John oversees business, event and community operations, bringing the GeekWire community together in creative, informative and fun ways.

A sought-after voice on startups, venture capital and the changing economics of the tech industry, John started covering the technology beat in the Seattle area in the 1990s as a tech reporter for The Eastside Journal before moving to The Seattle Post-Intelligencer and The Puget Sound Business Journal.

A native of Wooster, Ohio, he started his journalism career in high school, with a part-time job compiling obituary and election information for The Akron Beacon Journal, where his mom was a correspondent. He graduated from Gettysburg College with a degree in history, earning Phi Beta Kappa recognition and Academic All-American honors in soccer.

John’s interests include hiking, bicycling, microbreweries and watching English Premier League and Seattle Sounders FC soccer. He lives in Seattle with his wife Holly and son James. You can follow John on Twitter — @johnhcook — or catch him at one of GeekWire's upcoming events. 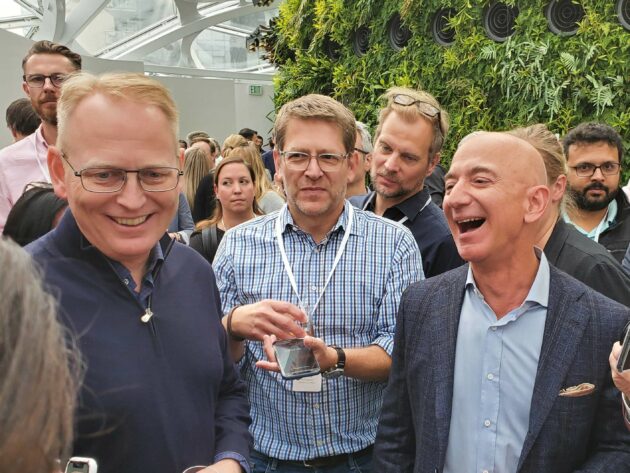 Seattle tech’s extraordinary year: These are the stories we’ll remember in the business of innovation

GeekWire is fortunate to report from one of the most dynamic and innovative places in the world: Seattle and the Pacific Northwest. What happens here matters everywhere, as we like… Read More

In light of recent recommendations from health officials in Washington state related to the coronavirus, the GeekWire Awards event — originally scheduled for March 26 at Seattle’s Museum of Pop… Read More

From Amazon to Zillow, big successes to surprising failures, it was an extraordinary year for technology and innovation emerging from and impacting Seattle and the Pacific Northwest. That’s our consensus… Read More

As we brought the GeekWire team together last week at our offices in Seattle’s Fremont neighborhood, recapping the past year and looking ahead to the next, we were struck by… Read More

GeekWire was founded on the vision that Seattle and the Pacific Northwest deserve a global tech news site and community of their own. Since 2011, we’ve hustled and pursued that… Read More

PALM DESERT, Calif. — Cisco CEO Chuck Robbins says the technology industry needs to be regulated, but that it’s going to take a new effort by the industry to build… Read More

“What are your benefits like?” Startup hiring managers often hear that question from top job candidates. When it comes to health and wellness benefits, you shouldn’t have to worry about… Read More

His name is Andy Hartpence, and he normally raps about video games, computer science and robots. But this week the Seattle nerdcore hip hop artist’s sly and silly rhymes about… Read More

We’ve got MLS Cup fever here at GeekWire — as you may have noticed with a Rave Green color change to your favorite technology news site. For the third time… Read More

The 2019 GeekWire Summit is just a few days away. After months of planning, we’re thrilled that more than 800 business, tech, media and government leaders will join us for… Read More

Our biggest event of the year — the 2019 GeekWire Summit — is one week away. Many of you are already on board, and we’re looking forward to seeing you… Read More

The digital revolution hasn’t upended the multi-trillion dollar healthcare industry, at least not yet. But transformative technologies including artificial intelligence, the cloud, robotics and IoT could finally push the industry… Read More

We’re not ready for summer to end, so we are squeezing in one last party. GeekWire Sounders Day is taking place Wednesday evening, and below is everything you need to… Read More

We’re back with a new episode of Elevator Pitch, the GeekWire show in which entrepreneurs pitch their business concepts in the 32 seconds it takes to travel to the top… Read More

Welcome to Smith Tower! With those words we kick off season two of GeekWire’s Elevator Pitch, a fun startup competition in which entrepreneurs pitch their business concepts while traveling to… Read More

It’s August in the Pacific Northwest, which means you shouldn’t be reading this post. You should be enjoying the natural beauty that this special corner of the planet has to… Read More

Some startups go up, others go down. We’re back for another season of GeekWire’s Elevator Pitch video series, where entrepreneurs compete for startup glory … on the 48-second ride to… Read More

We’re gearing up for another fantastic GeekWire Summit, and we hope you can join the fun on Oct. 7-9 in downtown Seattle. We’re opening registration today, with early-bird tickets now… Read More

Ah, summer in the Pacific Northwest. There’s nothing quite like it. From the stunning Mount Constitution vistas on Orcas Island to the urban trails of Seattle’s Discovery Park to the… Read More

Building a startup venture from scratch can be a daunting and lonely experience. That’s why we created The Playbook, a new speaker series where entrepreneurs, founders and investors connect in… Read More

President Donald Trump appeared this morning on CNBC’s Squawk Box, talking about tariffs and trade. But President Trump also used some of the airtime to respond to questions about the… Read More

It’s probably been a few years since you’ve “checked in” on Foursquare at your favorite restaurant, pub or hotel. But the one-time popular location-based social network is still alive, and… Read More

Earlier this week in the GeekWire newsroom, we tuned in to the noontime radio program from KUOW in Seattle — well, technically, we told Alexa to stream the show —… Read More

It’s one of our favorite times of the year. The GeekWire Awards are upon us. This annual tradition — now in its 11th year — brings together the Pacific Northwest… Read More

The annual celebration of the Pacific Northwest technology community is less than two months away. And before the community chooses the winners in more than a dozen categories, we could… Read More

The 8th annual GeekWire Bash on Thursday will have a little bit of everything: robotics, video games, ping pong, sumo, Catan and even a thrilling cross venue zipline. With 2,000… Read More

First Lady Melania Trump is headed to the Seattle area on Monday to visit with an undisclosed tech company as part of her Be Best initiative, according to a statement… Read More

Geek Home of the DaySee More

Become a Member for exclusive benefits.

Track companies with engineering centers in the Seattle region