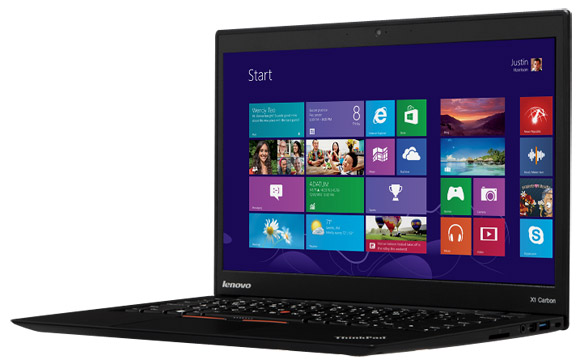 Three years ago, I was working at Microsoft to ensure that the security response process didn’t get in the way of the Windows 7 launch. Despite some white-knuckle moments, the launch went off without a hitch and Windows 7 has gone on to be the most popular version of Windows since Windows XP.

With the launch of Windows 8 though, I’m not with Microsoft anymore, and more has changed than just my lack of a blue badge. The tech world of fall 2012 is a much different one than in fall 2009 and nearly unrecognizable compared to fall 2001.

You can see these changes in the coverage and predictions around the Windows 8 launch. There’s no shortage of people calling this a “make or break” release, predicting disaster or likening October 26, 2012, to Microsoft’s Waterloo: a guarantor of ultimate success or abject failure. Whether or not you agree, the view that this release is a true existential challenge to Microsoft is a very different one, compared to the tenor around the launch of Windows XP in 2001 or even Windows 7 in 2009.

Naturally, Microsoft and its supporters are “super excited” about this release. They exude nothing but confidence in their vision of a new look and feel of Windows on desktops, tablets, and phones. And certainly, if the justification of confidence is meeting great challenges with boldness, they have reason to be confident. Whether or not you think the new direction is wise, you can’t argue that they’ve met these latest challenges by simply turning the crank and making a new version that is nearly indistinguishable from the last.

In fact, there is an irony that so much of the criticism of Windows 8 is centered on the “look and feel” because that was the root of Apple’s suit against Microsoft over Windows 2.0 and Windows 3.0 back in the 1990’s. Back then, Microsoft was criticized for being unoriginal and copying Apple’s innovations. Now, it’s being criticized for being too radical. Incidentally, the beautiful twist in this is that Apple recently used a Windows Phone as an example of someone NOT copying them in their patent suit against Samsung. How things change. 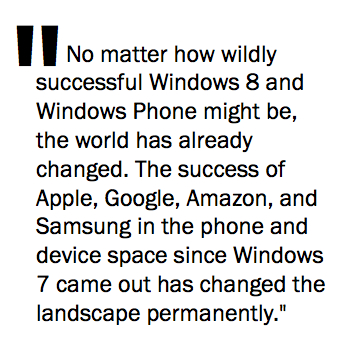 I would argue, though, all these predictions of large scale failure or success are misguided. We all like stories and Microsoft has been at the center of larger-than-life narratives, both of its own telling and by others’ accounts, for decades now. But these tales obscure the reality that is less dramatic and more complex.

No matter how badly Windows 8 and Windows Phone 8 might do, Microsoft isn’t going to disappear. Even IBM — whose rise and fall many gleefully use as a roadmap for Microsoft these days — survived, adapted, and is doing well today. Microsoft is more than Windows, Windows Phone and even Office. There are products like Dynamics, Windows Server, SQL Server, and Exchange that quietly succeed year over year. If you take those products, Microsoft’s cash on hand, and legacy sales (meaning sales to customers who can’t afford to be on the leading edge), there’s no chance of Microsoft disappearing any time soon. In a worst-case scenario, the stock may languish and there may be unprecedented layoffs, but there will still be a Microsoft.

However, no matter how wildly successful Windows 8 and Windows Phone might be, the world has already changed. The success of Apple, Google, Amazon, and Samsung in the phone and device space since Windows 7 came out has changed the landscape permanently. These companies did in three years what United States v. Microsoft couldn’t do in more than ten years: they brought diversity and broke the dominance of a single vendor. In the end, we’re all better off for this and we’re seeing again from these companies, as well as from Microsoft, that competitive scrappiness that drives innovation and benefits customers. This shows how the market is much more effective than regulation and antitrust enforcement at remedying imbalances in the technology space — something to think about as Google is looking more and more like the Microsoft of the mid-1990’s.

It turns out that it’s not the Windows 8 launch that’s critical, it was the Windows 7 launch that was: we just didn’t know it at the time. Windows 7 was too much of a “turn the crank” version and left openings, especially with regard to devices. That created the opening that others have been able to successfully exploit these past three years to gain footholds that won’t go away.

Yes, Windows 8 is important and a big change. But it’s not so much a “make or break” moment as an adjustment and adaptation to a new business reality that’s already there. As such, the results, whether a success or failure, will be much less spectacular than people would have you believe. There will be a Microsoft a few years from now. There will be another version of Windows, too. It will likely look more like Windows 8 does than Windows 8 looks like Windows 7 because the big shift has already happened. We’ve been living in the new normal for a couple of years now; we just didn’t know it.