This was the rap on former Microsoft Windows president Steven Sinofsky following his sudden exit last month: He was unwilling to play along with the rest of the company — making him a poor fit as Microsoft looks to integrate its products more deeply and compete more effectively in the fast-paced world of consumer technology.

And yet, in a internal blog post to the Windows team less than two weeks before resigning, Sinofsky practically gave a dissertation on the subject of cross-company collaboration — outlining best practices and pointing to the newly released Windows 8 as the ultimate example of teamwork among Windows, Xbox, Office, Bing, Microsoft’s internal IT department, customer support … and pretty much every team in between.

“Windows 8 is a remarkable study in being a product of all of Microsoft,” Sinofsky wrote.

So what gives? The internal post, obtained by GeekWire, makes it clear that the circumstances surrounding Sinofsky’s departure were more complex than they initially seemed. Reading between the lines, the post hints at a fundamental clash between Sinofsky and Microsoft CEO Steve Ballmer over the best way to run the company — a pivotal issue as Microsoft attempts to catch up in tablets and smartphones, and ensure its future among the top tier of tech companies.

Sinofsky’s prickly personality aside, the memo shows that he wasn’t opposed to collaboration. However, he believed it should be done in a purposeful way, as part of a plan, with an understanding of the complex organizational “physics” involved in making large-scale technology products.

And he warned of serious problems if executives became too heavy-handed.

He wrote in the post, “Collaboration is not a management thing. … Everyone has a role in defining whether collaborations happen or not. But history has shown that the most critical part of a collaboration are the individuals doing the work.”

Ballmer, in contrast, is known for his freewheeling and intense management style — willing to dive deep into product features and make key decisions at the executive level about nuances that would otherwise be left to product teams. This is particularly the case when the products, like Windows, are key to Microsoft’s competition vs. the likes of Apple and Google, or critical to Microsoft’s relationships with its industry partners.

Here’s the gist of the physics problem outlined by Sinofsky in his post: Decisions from the top expand exponentially as they ripple down through a large and complex organization and its industry partners. As a result, those decisions need to be grounded in the realities of the people actually doing the work.. They should also stay out of the weeds, remain consistent, and be communicated at the right point in the process … or things can really get screwed up.

Sinofsky wrote, “There’s always a lesson for management in ‘be careful what you ask for’ because if you push hard enough on a collaboration that is up against physics, ultimately one might drive things that don’t work for anyone — schedules will be missed, features will not deliver what is promised. Nothing is worse for a product than an integrated effort that is worse for all involved.”

Under the circumstances, it’s difficult not to read that as a cautionary note to Ballmer, because Microsoft has been there before. 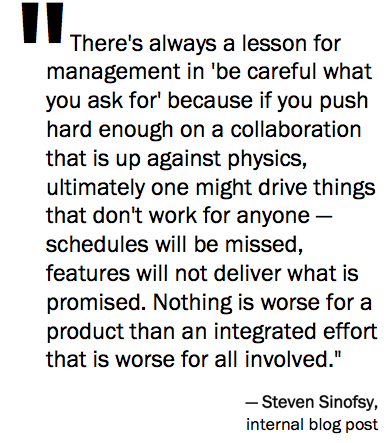 Windows Vista was the infamously late and troubled version of Microsoft Windows that shipped in January 2007. Sinofsky, a former technical assistant to Gates who previously led the Microsoft Office division, was brought over to Windows in the wake of those problems. As Windows president, Sinofsky led the turnaround of Microsoft’s flagship product with Windows 7, and a reinvention of the franchise with Windows 8.

Management gurus have taken note: Some of Sinofsky’s past internal memos to the Windows and Office teams were turned into a book, One Strategy, co-authored and narrated by a Harvard Business School professor.

If Sinofsky is the physics teacher, Ballmer is the football coach. The Microsoft CEO, who comes from the sales and marketing side of the company, often wears his emotions on his sleeve. He’s a tireless champion of the company, expressing unrelenting optimism in public.

“We see nothing but a sea of upside!” he told a shareholder who questioned Microsoft’s chances vs. Apple and other rivals in tablets and smartphones. “We appreciate that you’d like us to realize it, and we’re after that with all of our heart.”

In some ways, Ballmer’s hands-on approach represents a return to the days of Bill Gates — except that Ballmer, the business leader, doesn’t have the decades of software development experience that Gates did. Many of the leaders that report to Ballmer also come from the business side of the company. And Microsoft, with more than 90,000 employees, is a much larger and more complex organization than when it was run by Gates.

Inside the company, one of Ballmer’s greatest strengths over the years has been his ability to rally the troops to pursue big goals and fend off competitive threats. He listens closely to the company’s customers and partners, and because of that he serves as an influential channel for feedback to the rest of the company.

But people who believe in Sinofsky’s approach view Ballmer’s habits as a source of problems when they’re not a methodical part of the process. Entire teams can be sent in completely new directions based on new signals from the CEO that may conflict, unbeknownst to him, with more important goals.

What’s next? There are reports that Microsoft is aiming for more incremental Windows updates, released more regularly, which will sound familiar to Mac users.

In addition, some kind of divisional reorganization appears to be in the works, according to a recent post by Mary Jo Foley of ZDNet — who quoted a separate snippet of the same internal post referenced above, in which Sinofsky asserted that reorgs aren’t the right way to improve collaboration.

Despite detractors in some parts of the company, the approach championed by Sinofsky still has plenty of supporters in the Windows division. Julie Larson-Green, who now heads Windows engineering, reporting to Ballmer, is a respected executive and a longtime colleague of Sinofsky.

Still, if there’s a redrawing of the divisional lines in Microsoft’s post-Sinofsky era, it wouldn’t be a surprise to see Ballmer and other top execs take a more hands-on role in the integration and collaboration between Windows and the rest of Microsoft’s major products and teams.

The big unanswered question is what happens after that.