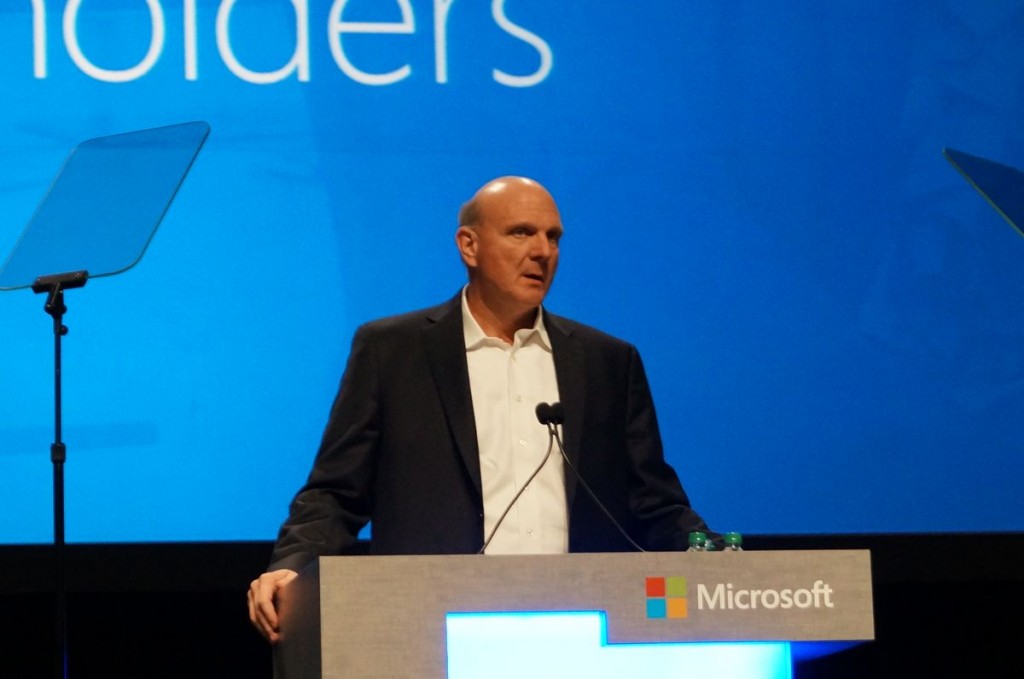 Microsoft CEO Steve Ballmer is addressing the company’s annual shareholders meeting right now in Bellevue, Wash. He started by talking about the uptake of Windows 8, citing the 40 million licenses sold, and alluding to the early usage patterns that the company reported yesterday.

“We know for sure that people get it, and like it,” he said.

“This is a new race, and it’s a new era for us,” he said, describing how the company is transitioning from being a pure software company to being a company that’s “great at software expressed through devices and services.”

Shareholders focused on issues including Microsoft’s competitiveness vs. Apple and Google during an extended Q&A session. “We see nothing but a sea of upside!” Ballmer said in response to one of the shareholders.

During the business portion of the meeting, shareholders voted in favor of Microsoft’s slate of board members and turned down a proposal to enact “cumulative voting” as an alternative way of electing the board.

The first shareholder question is about the stock price, talking about Microsoft’s stagnant shares and asking why she should hold on to her longtime investment.

Second question is about the upcoming generation, saying that many younger people are Apple focused.

“It’s a tough competitive market out there, and we certainly think that with the products that we and our partners are delivering to market … we have an opportunity,” says Ballmer. He notes that a lot of homework is done on Microsoft Office, primarily on Windows PCs, and games are played on Xbox 360.

Third question is about Microsoft’s antitrust problems in Europe, where antitrust regulators are considering a large fine against the company for failing to include a required “browser ballot” in a Windows update. A shareholder asks if the company will settle it for $1 or 2 million.

“If somebody would give us an opportunity to resolve our latest issue for $1 million or $2 million we’d be very interested,” says Microsoft general counsel Brad Smith, as the crowd laughed. He acknowledged that the company failed to do what it should have done, but was up front about the mistake and hopes regulators take that into account.

Smith is also addressing why Microsoft takes a stand on certain public issues, saying that some of those issues are fundamental to what it does and to the principles of its employees and partners.

Fourth question is about the H-1B Visa program, and Microsoft’s proposal to pay more to the U.S. government to be able bring more immigrant workers into the country. He talks about qualified engineers in the Seattle area not being able to get jobs. “You guys have a youth program. You need a youth program for people in their 50s.”

Microsoft’s Smith says the company actually does see a shortage of engineers in the U.S., and adds that Microsoft is not alone in seeing that trend. “Fundamentally, not just as a company but as a country, we’re going to have to decide, do we want to fill these jobs here or do we want to fill them somewhere else,” he says.

Fifth question is about Microsoft’s share price vs. Google and Apple. Ballmer refers back to earlier comments and says the company sees continued opportunity for growth and new market share in areas including smartphones and tablets.

Ballmer amps it up for the first time during the meeting. “We see nothing but a sea of upside! We appreciate that you’d like us to realize it, and we’re after that with all of our heart.”

Next question is about the role of the company’s retail stores. “It’s not real complicated,” Ballmer says, explaining that the idea is to sell more products and service Windows users and even some non-Windows users.

Next question, a shareholder cites Gates holding up a tablet years ago and saying it was the future, and asks why Microsoft hasn’t capitalized on that vision. Also adds, “I love my Windows Phone, but I’m a little jealous when I see my friends with their iPhones using Siri,” asks the next shareholder.

Ballmer encourages the shareholder to try the voice recognition on Windows Phone. He acknowledges the company’s struggle to gain tractions in tablets. “Sometimes getting innovation right across hardware and software is difficult unless you do both of them,” he said citing the company’s Surface tablet.

Final shareholder says he thinks something positive needs to be said about the company’s ability to adapt. “How many times have we said, innovate? You guys are innovating! I wish you success.”

That’s it. No word from Bill Gates.