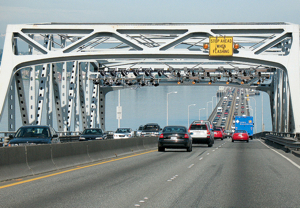 Today the Seattle region begins a massive experiment in behavioral psychology and regional transportation. Following the holiday week, it’s the first real commute since the start of tolling on the State Route 520 bridge — a key artery connecting Seattle to the Eastside homes of many of the region’s biggest tech companies.

The variable toll is as much as $3.50 one way with an electronic pass during peak hours, which is no small expense for everyday commuters. As we reported last week, many of them are expected to seek alternative routes or take public transportation.

Which would be great for me.

For the sake of office harmony, I try not to mention this to my colleagues, but I’m in the enviable position of living about a mile from GeekWire HQ — walking distance on a nice day. So I’m not on the bridge every day. That said, I end up going to the Eastside one or two times a week, often during rush hour, for interviews and stories involving Microsoft and other companies headquartered there.

Despite my best efforts to give myself ample time, the commute over the bridge can be a huge crap shoot, and at times I’ve ended up sitting on the bridge and missing the beginning of things I was supposed to be covering. I’ll spare you the story of trying in vain to stream a Steve Ballmer speech over my car speakers via my phone while in standstill traffic over Lake Washington.

I completely understand and sympathize with the financial hardship that many regular commuters face as tolls begin. It adds up to more than $1,600 a year for people who commute at peak times. Without employer reimbursement, that’s like taking a pay cut.

But as an occasional commuter, I’m willing to pay a little extra for my periodic trips if it means a faster trip, and less stress. So I’ve got my Good to Go pass.

I hope the rest of you have lots of fun sitting on I-90.

Postscript: This post was inspired by a conversation I had on Twitter this morning with KIRO-TV’s traffic watcher Jenni Hogan, who had me call in to talk to her about it on air. Watch the segment here.