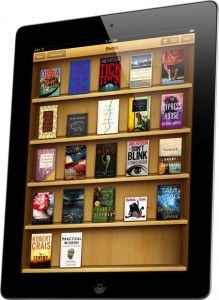 The DOJ lays out its case in a 36-page complaint.

Three of the publishers have agreed to settle the suit, freeing Amazon to revive its e-book discounting, the Wall Street Journal reports. The settling publishers are Simon & Schuster, HarperCollins and Hachette Book Group. Also named as defendants are The Penguin Group and Macmillan.

Referring to the settlement, Amazon says in a statement, “This is a big win for Kindle owners, and we look forward to being allowed to lower prices on more Kindle books.”

At a news conference this morning, U.S. Attorney General Eric Holder said the settlement represents “progress in protecting American consumers from anticompetitive harm, ensuring fairness in the marketplace, and making certain that cutting-edge technologies are available at the lowest possible price.”

Apple isn’t commenting on the case. Here’s an excerpt from the complaint.

Apple had long believed it would be able to “trounce Amazon by opening up [its] own ebook store,” but the intense price competition that prevailed among e-book retailers in late 2009 had driven the retail price of popular e-books to $9.99 and had reduced retailer margins on e-books to levels that Apple found unattractive.

The plan — what Apple proudly describes as an aikido move — worked. Over three days in January 2010, each Publisher Defendant entered into a functionally identical agency contract with Apple that would go into effect simultaneously in April 2010 and “change[e] the industry permanently.”

Prices on bestsellers and newly released e-books rose as to as much as $16.99 as a result, according to the suit.

Seattle lawyer Steve Berman, the lead counsel in a separate class-action complaint over the issue, said in a statement, “We’ve long held that Apple and this group of book publishers formed a cabal with the sole intent of extinguishing any competitive influences in the e-book marketplace. … While Attorney General Holder’s actions, if successful, will put an end to the anticompetitive actions, our class-action is designed to pry the ill-gotten profits from Apple and the publishers and return them to consumers.”