Zillow is using some of its new-found cash to gobble up San Francisco’s RentJuice, adding a new set of technologies that help landlords and property managers more easily keep track of properties, upload photos, manage revenue and deals. It marks the third acquisition for Zillow in the past 13 months, following its purchases of Postlets and Diverse Solutions.

“Zillow has spent the last six years building robust marketplaces for real estate and mortgages, and we are in the midst of growing our rental marketplace, which has tremendous potential,” said Zillow CEO Spencer Rascoff said in a statement. “The acquisition of RentJuice, with its talented team and innovative solutions for rental professionals, propels Zillow’s rental marketplace ahead by years.”

In an interview with GeekWire, Rascoff said that rentals represent a “huge market opportunity” since 70 percent of all movers are renters. “You can’t really be a leading real estate Web site without having a significant rentals business,” he said.

Whispers of the acquisition were first reported last month by TechCrunch. Zillow is currently undergoing a massive transformation as Rascoff positions the company as a provider of online tools for real estate professionals, diversifying beyond its traditional consumer offering.

“We are in the midst of a calculated, strategic expansion evolving our agent offering from a one-sized fits all advertising program to become more of a central hub for a variety of marketing and business services,” Rascoff said in February.

The announcement comes at the same time that Zillow posted strong quarterly revenues and profits. Revenue for the first quarter was $22.8 million, a 103 percent gain and the sixth consecutive quarter of more than 100 percent revenue growth. Meanwhile, Zillow’s net income rose to $1.7 million.

Looking ahead, Zillow expects revenue of $25.5 million to $26.5 million during the second quarter, year-over-year growth of 64 percent. The growth rate at the company is slowing, simply because of what Rascoff said is the “law of large numbers.”

“It is still nothing to sneeze at,” said Rascoff. “What’s happening there is we are getting bigger…. It is increasingly hard to keep that percentage number up.”

Zillow previously had four employees in San Francisco, and they will move to the RentJuice office once the deal closes.

Meanwhile, Zillow — which went public last July at $20 per share — continues to impress Wall Street. Shares rose more than four percent today, trading above $35 per share and giving the company a market value of more than $1 billion.

Rascoff said that the company will continue to look at other acquisition opportunities as it expands its base of offerings.

Last week, Zillow entered into an amended loan agreement with Silicon Valley Bank, allowing it to borrow up to $25 million in order to give the company “greater flexibility for future potential financing needs.” The company finished the quarter with $83 million in cash, cash equivalents and short-term investments.

Interestingly Zillow also reported today that more homes were viewed via mobile devices than desktop computers during the first quarter, the first time that has occurred. “This is a very important milestone for us, As you know, in real estate, this is a search experience that is significantly enhanced by mobile because it is map-based and location-based,” he said. “And quite importantly it is a much less competitive landscape on mobile than it is on the Web.”

Average monthly unique users — on mobile and the Web combined — grew by 84 percent during the first quarter to 31.8 million.

UPDATE: Shares of Zillow are soaring in trading Thursday morning, jumping more than 15 percent. The stock, which went public last summer at $20 per share, has now doubled and is trading above $41. Amazingly, that gives the company a market value of  $1.18 billion. 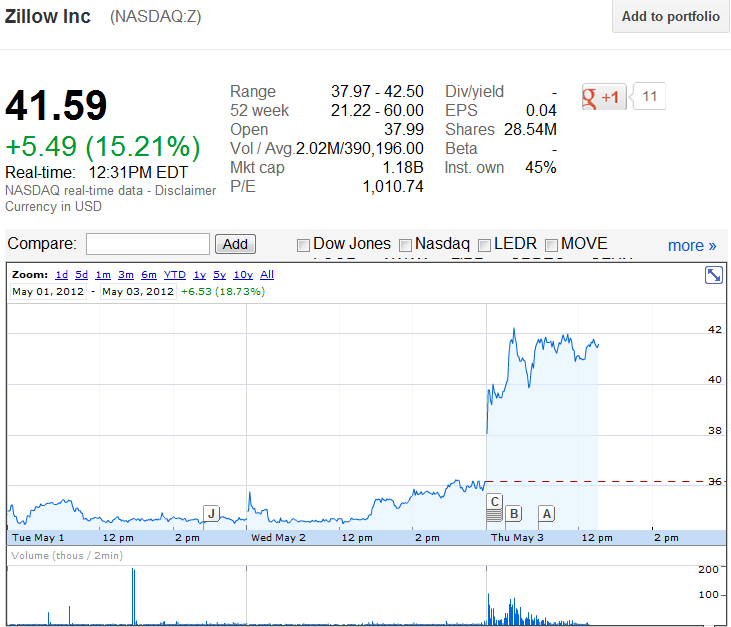