Amazon has filed several patents recently that show that the e-commerce giant continues to be interested in the world of physical retail. 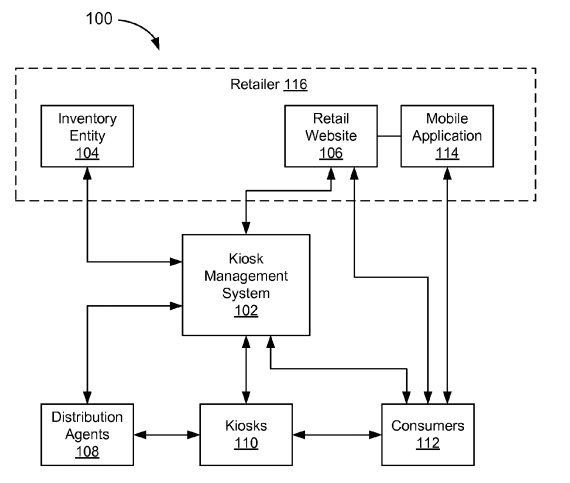 Over the past few months, the company has experimented with a number of different retail scenarios, including two mall kiosks, a location in Manhattan that’s making one-hour deliveries and college campus book stores. There were even significant rumors of the Seattle retailer buying up hundreds of stores from RadioShack out of bankruptcy.

But according to recently filed patents with the U.S. Patent and Trademark Office, the Seattle e-commerce has other ideas, too. One concept is called a Kiosk Management System, and a second illustrates how a store that could allow consumers to shop for items and leave without pay a cashier for them.

The first one, which was filed back in 2013 but updated as recently as last week, paints a picture of a complex network of kiosks, which would be located at tens of thousands grocery stores, gas stations or airports around the country. After a customer purchases an item online or from their phone, he or she could pick up the item at a location of their choice. Amazon uses lockers today at pick-up locations, but in this scenario, the kiosks could also stock popular items ahead of time.

The concept would result in a decrease in shipping costs for both the retailer and the consumer, making it free, or significantly reduced compared to shipping an item to their home. “While convenient to the consumer, the delivery of numerous individual items to numerous individual consumers at varying addresses can become exponentially costly to both retail businesses and consumers,” according to the filing.

The second patent application, reported on by Re/Code yesterday, explores the idea of using cameras and sensors to identify what items a shopper has picked up, to eliminate the headache of having to stand in line and check out. It was filed in September and published in January.

The technology could be used in a warehouse or fulfillment center, but in the case of a retail store, Amazon writes that instead of a consumer having to stop and check out with a cashier, the user may simply exit the retail location with the items because the selected items are already known and identified. The consumer would be charged and receive notice via email or some other form of communication.

The first patent, outlining a kiosk management system, was filed by Neil Ackerman, who conducts product management and strategic invention at Amazon, according to LinkedIn. In 2014, Ackerman received the highly coveted “Just Do It” Award, presented by Jeff Bezos. Only a couple of dozen people have received this recognition, according to his biography.

The second patent, regarding retail check-out systems, lists multiple inventors, including Steve Kessel, an Amazon SVP, who we reported last month had returned from a long sabbatical to work on a super secret project. It still isn’t known what Kessel, who is known for developing the company’s first e-reader, is doing, but perhaps this filing sheds some light on it.

One thing to note is that Amazon applies for a huge number of patent applications on a regular basis, so the sheer existence of a filing does not necessarily mean the company will actually result in a commercially available product.