Amazon today launched Prime Now, a new one-hour delivery service that offers Prime members a way to have “daily essential” items like paper towels and shampoo arrive at their door within 60 minutes of ordering. The service debuts in Manhattan today, with expansion to other cities rolling out in 2015. 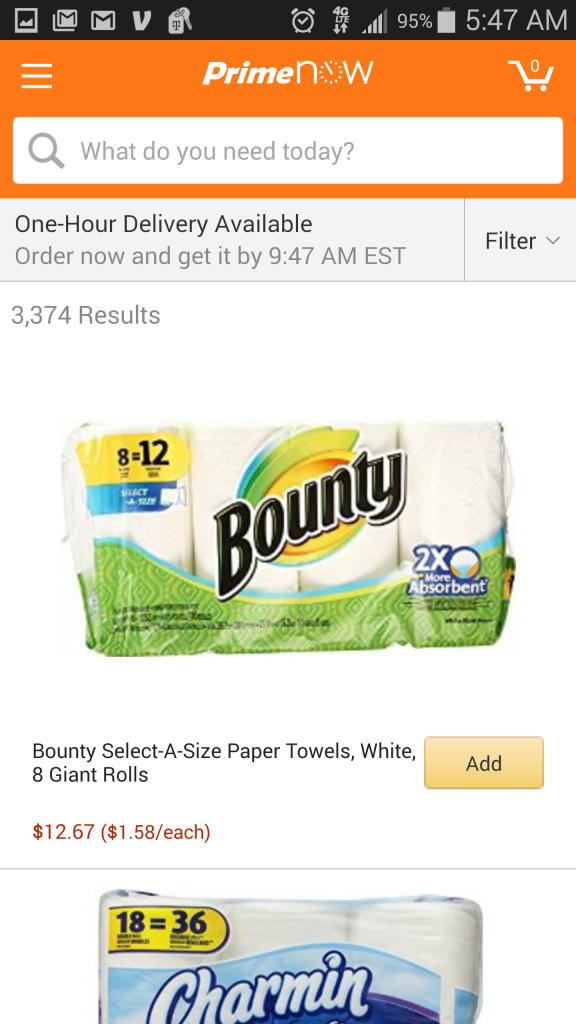 Prime customers can access Prime Now via a mobile app for iOS and Android, and choose from products like books, toys, food, and other basic items. The service, which is available from 6 a.m. to midnight each day, costs $7.99 for one-hour delivery and is free for two-hour delivery.

Amazon’s new building on West 34th Street will serve as a hub for Prime Now orders. Earlier this month, the Wall Street Journal reported that Amazon was holding time trials from the building, where bike couriers also have a place to hang out in between deliveries, complete with foosball tables and an arcade.

In a statement, Dave Clark, Amazon’s senior vice president of worldwide operations, said Amazon Prime is “the best deal in the history of shopping and now it has gotten even better.”

“There are times when you can’t make it to the store and other times when you simply don’t want to go,” Clark said. “There are so many reasons to skip the trip and now Prime members in Manhattan can get the items they need delivered in an hour or less.” 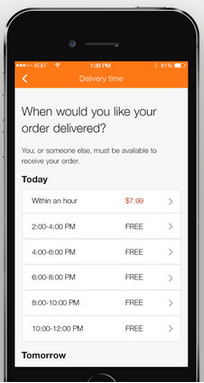 This is the latest attempt from Amazon to speed up its delivery process, as the company has explored the use of everything from drones to taxi vehicles to storage lockers. Amazon currently offers same-day delivery ($5.99 for Prime users; $8.99 for others) in a dozen U.S. markets, and recently expanded the service to Canada.

Amazon faces stiff competition in the same-day delivery arena from both tech giants and small startups. eBay operates eBay Now in four markets — though it has recently scaled back plans for the service — while Google and Walmart have tried something similar. Startups like Instacart, Postmates, WunWun, and Deliv also offer ways for customers to have items delivered within 24 hours. Even Uber has tested out its own bike courier service in New York City called UberRUSH.

Amazon said that Prime members will be notified via the Prime Now app if the service becomes available in their area. This is yet another benefit for the $99 per year Prime membership, which includes free two-day shipping, music streaming, unlimited photo storage, and access to Prime Instant Video content.