Amazon is set to open a retail store in San Francisco as early as next week, according to a source familiar with the deal. 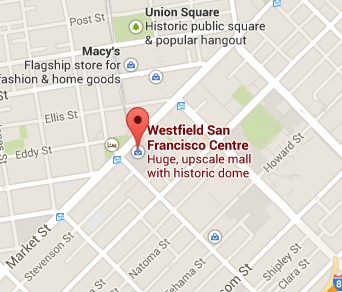 The store will be located at Westfield San Francisco Centre, a mall located in the heart of downtown San Francisco on Market and Fifth streets. The source tells GeekWire that the opening is currently slated for Wednesday, Oct. 22, but since there’s no official announcement or festivities planned, schedules could change slightly.

Update: Amazon confirmed the new location and date, calling it a pop-up store for the holiday. It is unclear when the store will close.

“We’re excited to open new pop-up kiosks in San Francisco and Sacramento in time for the holidays so that customers can try out our new devices,” a spokeswoman said. “The team is moving incredibly quickly – already this year we’ve launched Fire TV, Fire phone, new Fire tablets, new Kindle e-readers, and a bunch of new features and services. While customers can already see our products online and at retailers like Best Buy and Staples, we wanted to provide another option to try out our full line-up leading into the holidays.”

Last week, The Wall Street Journal reported what it believed to be Amazon’s first brick-and-mortar store in New York City. But without a known date for the Manhattan location to open, the San Francisco pop-up store could come even sooner.

It’s unclear whether the pop-up store signals a bigger commitment by Amazon for physical retail beyond what it did last year.

Amazon has already tested physical retail in a number of different ways. It has experimented with automated vending machines for its Kindle e-readers and Kindle Fire tablets; installed lockers in other retailers’ store around the world and has set-up kiosks in malls to push the Amazon Fire Phone.

While Amazon gets a lot of credit for dominating e-commerce sales, the store openings show that it can’t ignore that a vast majority of retail revenues today still occur in the offline world. The struggle between the two is often depicted as a war between online and offline, and if that’s true, then Amazon’s move into stores is the highest compliment the e-commerce giant can pay to physical retail.

If this storefront works well, Amazon may roll out similar stores to other locations around the country, however, there’s no commitment to build more at this time, according to the source.

The exact location within the mall is unknown, but the mall anchors a busy downtown San Francisco corridor, and is frequented by nearly 16.5 million customers a year, according to Westfield. The 1.5 million square foot mall is an iconic piece of architecture, with a steel and glass dome and spiral escalators. The mall is home to nearly 200 shops, including Bloomingdale’s, Burberry, Tiffany & Co.

Not to be overlooked is the nearest Apple Store, which is not even a block away.

The San Francisco and Sacramento pop-up stores will be stores that serve as showrooms for some of Amazon’s own products, like its updated Kindle and Kindle Fire lineup and its Fire smartphone.

The Manhattan store, however, is rumored to be a pick-up location and mini warehouse.

There’s been rumors that the e-commerce provider was going to open a physical location for quite some time, so this news or even word that a storefront was opening in Manhattan, should not be a huge surprise.

The mall isn’t a bad place for Amazon to get its feet wet, especially the Westfiled Mall in San Francisco.

Just last week the San Francisco Chronicle reported that Westfield was experimenting with a co-working space, featuring pop-up shops, a hackathon venue and a bouldering wall.