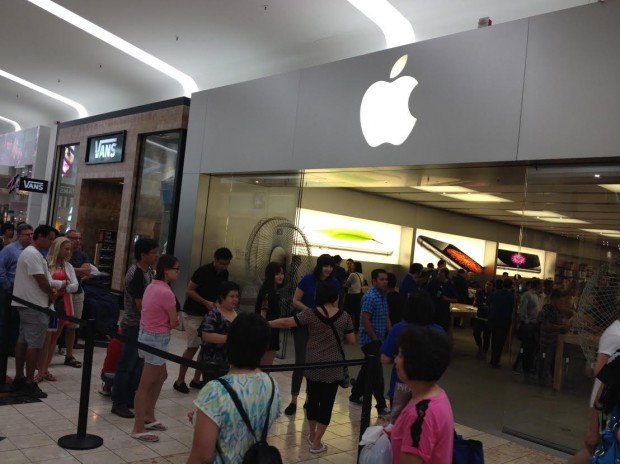 For the past seven years, Apple fans have been waiting in lines to buy the latest iPhones, and the new iPhone 6’s have proven to be no exception.

On Sunday, the Apple Store at Westfield’s Southcenter Mall near Seattle had an impressive turnout with a few dozen people patiently waiting to get their hands on Apple’s latest innovations.

But just five doors away, another kiosk caught my attention for a completely different reason — the standalone booth was promoting the Amazon Fire Phone, and not a single person was in line.

The small stand, which was slightly bigger than a telephone booth, had a Fire Phone mounted on each of the four sides and was flanked by four cocktail-height tables. Salespeople wearing grey T-shirts with Amazon stamped on the front stood idly by, ready to help any potential customers.

But no one was eager to test out Amazon’s Firefly comparison shopping tool, or its nifty 3-D interface. The observation was found not only interesting to me but also to my followers on Twitter. So far, my tweet about the Amazon Fire Phone line (or lack thereof) has generated hundreds of retweets and favorites.

Many of the responses were snarky, as you can imagine.

“It was so nice of Amazon to come in and boost Windows Phone’s self-esteem,” wrote Brandon Paddock. Another tweet tried to explain the lack of a crowd by saying that everyone opted for drone delivery.

But fast forward to today, and it’s clear that Amazon doesn’t have much to joke about after news cycle focused on many of its competitors.

For instance, Apple was pleased to announce this morning that it sold 10 million iPhone 6 and 6 Plus units in three days. (Since Amazon doesn’t release sales figures, the best guess for Fire Phone is 35,000 sold after a whole month). Separately, Alibaba, one of Amazon’s big international threats, was being praised for accomplishing the world’s largest IPO to value the company at $221 billion, or 33 percent higher than Amazon.

Another stark difference between the two device makers — Apple and Amazon — was made obvious last week when Amazon launched four new Kindles in a massive refresh of its tablet and e-reader product lines. It announced them by quietly lifting an embargo late on Wednesday night, rather than host a flashy media event, like it did for the Fire Phone.

To be sure, these are all independent events, and it’s not fair to compare a line outside the Apple store on its first weekend to a line for a phone that’s been on sale for two months, and already marked down to 99 cents with a contract. But after my trip to the mall this weekend, I found myself thinking that Amazon is looking a little exposed on multiple fronts — not just smartphone sales — as retailers have adapted to the online world.

Here’s a few observations about the threat to Amazon from a person who infrequently shops at the mall:

I’m sure some of these experiences have been around for some time, and are nothing new, but the improvements that retailers are making seem to be very real in their efforts to become more Internet friendly.

Without a doubt, Amazon is innovating on all fronts, as well. While extending its line of tablets to include smartphones, it’s also rolling out same-day delivery using its own fleet of trucks, and through new partnerships with the U.S. Postal Service, for instance, it has enabled Sunday parcel delivery. Through those efforts, you can get a package nearly as fast as it would take to get into your car and drive to the nearest mall.

But I could also see a day where Amazon is no longer so far ahead of everyone else. And, if it’s not a physical retailer that comes close to replicating the online experience, it could be a Chinese e-rival, like Alibaba, which is now flush with $25 billion in cash from its blockbuster IPO.

Amazon gives itself long timelines to turn new products into successes, but the Amazon Fire Phone has already been four years in the making. Perhaps, Amazon’s difficulties aren’t a surprise to anyone, but it seemed clear walking through the mall yesterday that the company has other fires to fight, and it has already lost this stage of the smartphone battle.