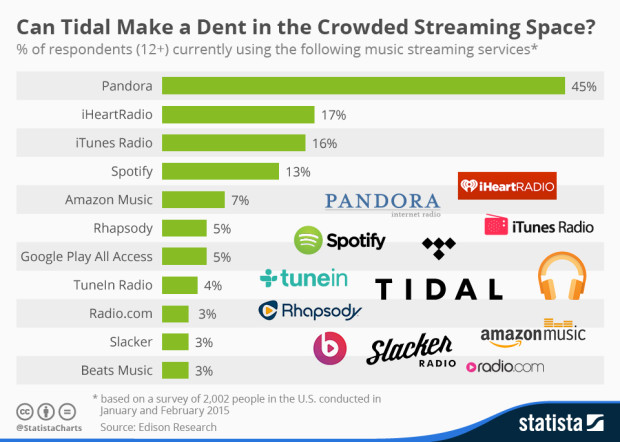 It’s hard out there for a streaming music service in the U.S. A new chart from Statista shows just how crowded the market is for businesses vying to provide music fans with a way to stream tracks to their computer or smartphone.

Based on data from Edison Research it shows how wildly popular Pandora is…and then how hard it is for any other streaming service to command a sizable chunk of the market. Rhapsody only has 5 percent of the market, behind iHeartRadio, iTunes Radio, Spotify and Amazon Music, but still ahead of Apple-owned Beats Music. 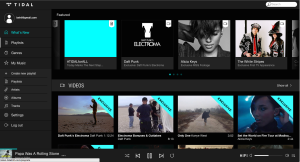 That crowded market received another entrant yesterday with the launch of Tidal, a streaming music service owned by Jay Z that has the support of a star-studded crop of artists including Daft Punk, Madonna and Nicki Minaj. It offers a $9.99 streaming service with access to songs and videos from artists in its catalog, plus a $19.99 “HiFi” service that gives users access to higher bitrate FLAC audio. (Of course, there’s some debate as to whether people can actually hear the increase in quality.)

Apple, meanwhile, is reportedly reworking Beats into a new streaming service that it plans to launch later this year. All of this adds up to an incredibly tough market. Services that offer a free streaming option like Pandora, Spotify and iTunes Radio are clear favorites among consumers, but artists like Taylor Swift are steering clear of them, saying that not charging for access to music devalues their product.

Tidal is supposed to be an answer to that – a premium service for music fans. It remains to be seen whether it will actually take off.