You wouldn’t know it judging by the spoonfuls of hot chili that Mayor Mike McGinn is wolfing down, but it’s a picture-perfect and rather warm May afternoon in the Emerald City.

As we chat about how Seattle can become a global startup hub, McGinn looks outside his vast seventh floor City Hall office window to the beautiful blue waters of Puget Sound.

“What sets Seattle apart,” the mayor says, “is the quality of life.”

He then quickly lists them off: A great music and nightlife scene. A thriving place for arts and culture. Beautiful natural environment that “we treasure,” as he puts it. A city that’s open to gay marriage and supportive of immigrant and refugee communities.

“When you put it all together, this is a good place to be if you want to try to realize some of the potential of who you are,” McGinn continued. “We provide a ton of opportunity. And yes, people are going to go to New York City, San Francisco and Boston because they have those attributes, too. But I’m glad I’m Mayor of Seattle.”

McGinn lets out a big laugh, but he’s not kidding: Seattle is well on its way to becoming a world-class city. He knows that a booming business scene has a lot to do with progress, and so today McGinn announced the launch of a new initiative called Startup Seattle, taking over the site that was started by Seattle startup impresario Red Russak. The new effort is designed to support the growth of the Seattle tech startup community and make the city recognizable around the world as a thriving startup ecosystem.

The initiative is a collaborative effort between the City of Seattle and an advisory group made up of several influential tech titans in the area like GeekWire Awards keynoter Chris DeVore, the University of Washington’s Ed Lazowska, Madrona’s Greg Gottesman, Startup Weekend’s Marc Nager and SURF Incubator’s Seaton Gras. (Editor’s note: GeekWire co-founder John Cook also served on the advisory committee). It’s also the result of a year’s worth of research done by the City, including startup roundtables like the one McGinn organized last May.

The City plans on doing a number of things to ensure that entrepreneurs in the area have what they need to succeed: 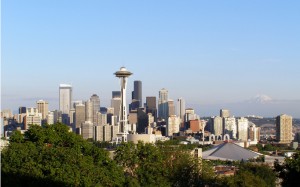 In a broad sense, the initiative is all about facilitating city processes to support startups.

“Startups are great at telling their individual stories but bad at representing themselves as a class,” DeVore said. “In a global competition for talent and capital, Seattle needs a nonpartisan, noncommercial voice that aggregates data and stories from our community and broadcasts them to the world.”

“This is putting a stake in the ground to brand Seattle as a great place for startups,” Lazowska added. “There’s some real beef here; it’s not just hollow PR.”

McGinn and the City have made similar attempts to help entrepreneurs grow businesses for the past few years. Diving back into the 2010 Seattle Jobs Plan, there are three pages dedicated to supporting startups, from a $50 million business financing distribution plan to the growseattle.com website resource.

How and what exactly that has done for the Seattle startup ecosystem is certainly up for debate, but the most recent numbers do show show the unemployment rate in the Seattle metro area dropping to just 5.9 percent.

In the tech industry, we’ve been seeing a steady stream of hiring for several years now, as companies like Amazon.com, F5 Networks, Tableau, Zillow and others in the region continue to fight hard for the very best talent. The market is so red hot that Google earlier this year announced plans to double the size of its Kirkland campus with room for as many as 1,000 new employees.

But there can never be enough talent, especially in a startup hub, and many believe Seattle lacks enough quality entrepreneurs. In fact, one of Seattle’s top venture capitalists caused quite the stir when he noted that the quality of entrepreneurial talent in Seattle just isn’t up to snuff when compared to the Bay Area.

There’s also the issue about growing concerns over the lack of VC funding available in Seattle. To some degree, the only major venture capital firms left in the region are Madrona Venture Group, which successfully raised a $300 million fund last year, and Maveron, which recently announced a new seed fund program.

While some VCs claim that talent is the problem, others say that it’s the lack of capital available — accelerated by the fact that leading venture capital firms such as OVP Venture Partners and Frazier Technology Ventures have disappeared. In addition, Ignition’s scaled-back $150 million fund will make a large percentage of its deals in California startups.

But in terms of the Startup Initiative, McGinn made it clear that “you don’t want your city being a venture capitalist,” and said it’s something out of his hands.

“What we’re more trying to do is take the pieces we have and make them more effective — build on our assets to attract more people and more buzz,” he said. “Hopefully that will attract more capital to the city because people will see that we treasure it here.”

When asked why he thinks startups are important to a city, McGinn pointed to the three big words on the cover of the most updated version of the Seattle Jobs Plan.

“It’s right there: Innovate, Educate, Build,” McGinn said. “When you think about how we will compete in a global economy, those are the three categories you want.”

It’s those pillars that McGinn has been touting for the past few years and he believes startups are especially key to the innovation aspect. He said cities in general help create great ideas because they’re a place where people hailing from different disciplines intersect.

The Startup Initiative was created to support that business environment, help spur networking and offer people a way to understand how to navigate the city government.

“The city has assets and powers that no private player has — like public transit, zoning, tax and regulatory — that can be used in positive ways to shape the future of our city and neighborhoods,” DeVore said. “We need the startup community to have a strong voice in city hall advocating for choices that will make Seattle even more appealing to entrepreneurs.”

Education is also key when it comes to building out the startup community and cultivating future entrepreneurs that work in the region after graduation. While the UW has a premier computer science school right in Seattle, the acceptance rate is low and hundreds of would-be programmers are turned away every year.

That’s why many support the idea of a tech-focused private university to offer budding local engineers more opportunities to be educated. As part of his effort to transform New York into a “mid-Atlantic Silicon Valley,” NYC Mayor Michael Bloomberg put huge resources behind Cornell, NYU, and Columbia to expand engineering programs in the city and so far, it’s certainly helping the startup scene there.

But Seattle does not have several established universities in the area like NYC and perhaps one thing that could really help the city is multiple second-tier schools. While Seattle has a premier institution in the UW, there’s not much else here churning out talented graduates. McGinn did cite Northeastern University’s move to Seattle as one example of a school realizing a market niche not being filled.

McGinn admitted that lack of opportunities for university students in Seattle is “absolutely a concern,” but just like in 2011, he again emphasized that the focus shouldn’t solely be on the software sector.

“I personally tend not to think it’s all about specialized focus,” he said. “When you look at who supports our startup economy, it’s a wide range of expertise: computer scientists, graphic designers, business, accounting, art.”

As part of the Startup Initiative, the City does plan on centering its first “innovation hub” around the UW. Lazowska said that, given the critical role of research universities in innovation, he and his colleagues have worked hard to get more tech companies to open up their HQs in the U-District. But because the surrounding area is “an ocean of head shops, pho restaurants, and squalid student housing,” that’s been extremely difficult.

However, a new light rail station that will open toward the end of the decade could change things, and combined with the research coming out of the UW, may turn the U-District into a humming innovation center.

“There will be lots of construction going on, and at the end of it, the U-District will be a big-time transit hub,” Lazowska said. “Let’s take advantage of this to envision a broader transformation.”

When it comes down to it, the startup scene here is definitely bustling and diverse — after all, how many places in the world are working on asteroid mining, sonic-powered vibrators and robot-powered retail?

If anything, the city is definitely on to something.

“I think we are on the verge of the big time,” Lazowska said. “We’re right at the tipping point. The goal of this initiative is to push us over the edge.”

We’re excited to see what’s next for Seattle, especially when you’ve got people like Tableau CEO Christian Chabot — who relocated his company from Palo Alto to Washington — saying it’s the promised land of startup America. The Startup Seattle initiative seems like a step in the right direction for this ecosystem, but how exactly it will help and with what impact is to be seen.

Previously on GeekWire: Seattle angels on what they look for in entrepreneurs, and why startups fail … Why this entrepreneur is moving to Vegas, and what it means for the Seattle scene