Madrona Venture Group’s Matt McIlwain wasn’t born in Seattle, but he’s about as much of a homer as you’ll find when it comes to touting the benefits of the Pacific Northwest tech industry. In fact, pressed to name a weakness of the region, the only thing he could come up with is that folks in these parts need to do a better job of touting the benefits of what’s going on here.

We chatted with the venture capitalist fresh off Madrona’s raising of a new $300 million venture fund, the largest in the 13-year history of the firm. (See previous story here).

Madrona won’t be changing course with the new fund, with McIlwain telling GeekWire that about 85 percent of the money will likely go to backing firms in the Northwest.

On raising $300 million: “We targeted $250 million, and we agreed that we wouldn’t go above $300 million because we think that that sort of general size is the right-sized fund…. We are really fortunate that folks who are or have been senior folks at Microsoft, Amazon, McCaw, T-Mobile, F5, are all investors with us, and we think that is an important alignment in what we do in terms of early-stage investing here in the Pacific Northwest.” 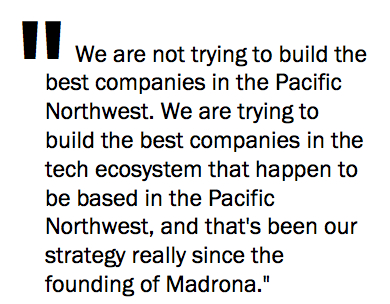 Madrona is kind of alone in Seattle. Don’t you need more VC competition? “We want and welcome other types of investors in this ecosystem, sometimes we will work together with and sometimes they will do other things on their own. We really believe that is part of the innovation ecosystem and the rising tide will lift all the boats here…. We are rooting for all of those guys to raise funds. And we will continue to do so and be a resource, because we … believe in the idea of other hands-on company builders. The people who can come alongside companies, whether along with us or on their own, and they are really trying to build the next-generation of companies. And the more we have that, the better it is for all of us. We want more active company builders and capital providers in this ecosystem.”

On why he’s so bullish on Seattle: “We have two of the eight largest tech companies by market cap here. There is only one other place in the whole world that has that, and that’s the Valley. We have both Microsoft and Amazon, both $100-billion-plus market caps…. That means we have two of the most important anchor tenants in the whole tech ecosystem. We’ve also got this great group of regional offices, and this didn’t really exist 10 years ago. The Google office is over 1,000 employees, Facebook, etc. And the newest one being Twitter, and Zynga, of course. We also have an increasing number of mid-size companies, some truly independent like an F5, like an Expedia, like a Concur…. And I think that is really valuable. I remember when I came to Seattle 12 years ago, it was harder to recruit people because of one primary reason which was: There was a concern that if that job didn’t work out, ‘where was I going to go?’ And that concern is predominantly gone now…. This is one of the most competitive talent cycles I’ve seen in the venture business right now. But in terms of people being concerned about coming to Seattle, they are not any more. And then I think we have a vibrant angel ecosystem, and we try to promote that too.”

On what’s missing in Seattle: “If there’s one thing missing, it is that people don’t fully appreciate how good the talent and early-stage companies are, and it is only getting better because we are right at the intersection of so many important trends. Our wonderful Pacific Northwest culture of humility and understatement works a little bit against us. Don’t get me wrong. We are not going to fall into the trap of the hype cycle of the Bay, but I think we have a lot of substance that is underappreciated still, and the more we believe in that, the more amazing success stories will come from here. We interact with a lot of companies from the Valley, and I think pound-for-pound the companies that we and other people back here, and get built here, are really understanding. And I don’t think people always appreciate that.”

FOLLOW UP: Madrona’s Matt McIlwain: Silicon Valley has a bad case of indigestion and may be ready for a correction