Can the City of Seattle do more to support startups?

That was the question raised Tuesday night by Seattle Mayor Mike McGinn, as he brought together more than a dozen tech and startup leaders to share thoughts on what’s missing from the tech community.

From tech incubators to private universities to startup job advertisements at Sea-Tac Airport, McGinn got an earful on how to make Seattle’s startup hub even stronger.

McGinn called innovation a “strength in the city,” and stressed that he’s “all in” when it comes to touting the importance of Seattle’s startup climate. He also proposed a “startup commission” of sorts, made up of industry leaders, to help propel the city forward in creating the best place “to start up a new business.”

“I can’t figure this out alone,” said McGinn, taking advice from staffers that “commission” might not be the best moniker for the working group. “I really do need your expertise to figure out what’s the best way to use the resources of the city.”

It’s certainly a timely topic given the efforts of New York City Mayor Michael Bloomberg to galvanize that city into a top tech hub. That’s been the source of a lot of discussion on GeekWire recently, with pointed questions about why New York has been able to — at least from the public perception standpoint — leapfrog Seattle’s startup ecosystem. It was also a topic at Tuesday’s Technology Alliance luncheon in which several tech leaders offered feedback on what could be done to improve the Seattle tech community.

Tuesday’s free-flowing discussion — which included thoughts from Peter Wilson of Facebook, Marc Nager of Startup Weekend, Bo Lu of FutureAdvisor and others — was divided into five main topic areas.

There was a lot to cover during the 90-minute meeting, and we’ll do our best to summarize the high points in the notes below.

1. Education, and establishment of a private university

Amy Bohutinsky, chief marketing officer at Zillow followed up on an earlier GeekWire column to stress the importance of cultivating engineers, suggesting that support of a private university might be one method to make sure that more tech talent is created.

She said, “Most people here know the stats of the small number of computer science degrees that are granted every year at the UW, and how 80-some percent of people are turned away from the program. We just are not growing enough engineering talent within the city to support all of these startups … when we are competing with big Bay Area companies who are opening up offices here, and we are all competing against each other for the small pool of very good talent. A startup is only as good as its talent.”

Bohutinsky asked McGinn what the city could do to support the private university concept, similar to what Mayor Bloomberg rolled out in New York with the recent announcement of Cornell University’s high-tech campus on Roosevelt Island.

Mayor’s McGinn’s response: “I think it was a great idea, and count me jealous of Bloomberg for thinking of it first. In fact, there was a round of conversation in our office of what are the assets that we have that might be available for something like that. I don’t know that we’ve developed that list, yet. Seattle is interesting in that the UW is clearly a world-class research institution…. But then, in terms of research and computer science and the like, it drops pretty quickly. 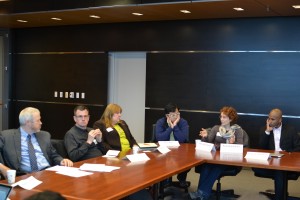 We don’t have the deep bench that other cities have where there are multiple institutions in different tiers…. If you compare our city to other cities, we don’t have the same depth …. so that is something we’d like to change. So, yeah, absolutely interested in exploring it…. One of our bigger challenges … is that a lot of the students who graduate from our public school system aren’t ready for the community college system, and they have to spend a ton of (time) on remedial work, so we have a problem at every step of the way in terms of educating people for tech careers.”

Citing the defeat of I-1098, which would have raised funds for education by imposing an income tax on the wealthiest citizens in the state, McGinn said, “We are boxed in on educational funding on the state and local level.”

In terms of attracting more educational institutions to Seattle or making land available, McGinn added that he’s “totally open to it.”

TeachStreet co-founder and Amazon.com employee Dave Schappell discussed the business and occupation tax, which he described as “painful” for startups since it is taken off top-line revenue without regard to profitability. “It is not very startup friendly or a way to attract people to the city,” said Schappell.

Mayor’s McGinn’s response: McGinn said that he’d favor a corporate income tax over a B&O tax. He noted that if companies have less than $100,000 in gross receipts they are exempt from the tax. But, he agreed, with Schappell. “You can be big, and losing a lot of money and you pay the same amount as someone who is the same size and making a lot of money. So, there is a real serious equity issue there. …We are a creature of the state, so our taxing authority is determined by what the state legislature gives to us, and the B&O tax is a fairly important piece of our overall tax revenue. Property taxes are big. Sales taxes are big… But I couldn’t do a corporate income tax in the City of Seattle even though I’d love to. I don’t have that authority…. ”

Kim Rachmeler, an ex-Amazon employee and angel investor, suggested that the city could put in a place an “amnesty” program in which startups could defer B&O taxes. “Many of these companies, we wish them to become the small acorns that grow into the oaks that shade us all, but they need some time to get there, so if they could have an amnesty period in which to grow larger and these taxes could conceivably be paid at a later date, that’s not eliminating the tax, but it is giving them a chance to get there.”

3. Public support and PR assistance from the Mayor

Chris DeVore of Founder’s Co-op discussed the importance of the Mayor to publicly trumpet the Seattle startup community.

DeVore said, “I’d ask you personally to stand up publicly, every chance you get, and say: ‘Digital innovation is the future of our economy and we want Seattle to be the place where startups are built and the brightest people in the world come to work.’ I know you do a lot of quality-of-life-work, but I don’t think I’ve ever heard you stand up and say (that) in the way that Bloomberg did…. Fundamentally, it is about staking a claim to Seattle as the city that cares about startups and innovation, and changing the world through innovation. It takes somebody to put their name on the line, and say: ‘I believe in this.’ Behavior comes from speech. Public declarations of intent lead to consistent behavior in other domains, so before I asked for any money or tax changes, if you begin to make that public commitment, I expect that other commitments will follow from that.”

Mayor McGinn’s response: “I’ve been trying to do that effectively, so if people have ideas on how to do it better….The line I try to use is that I still believe that somebody might start the next big thing in their spare bedroom or their garage, so I am happy to do that…. You find me the opportunities to sell tech, and I’ll do it.” 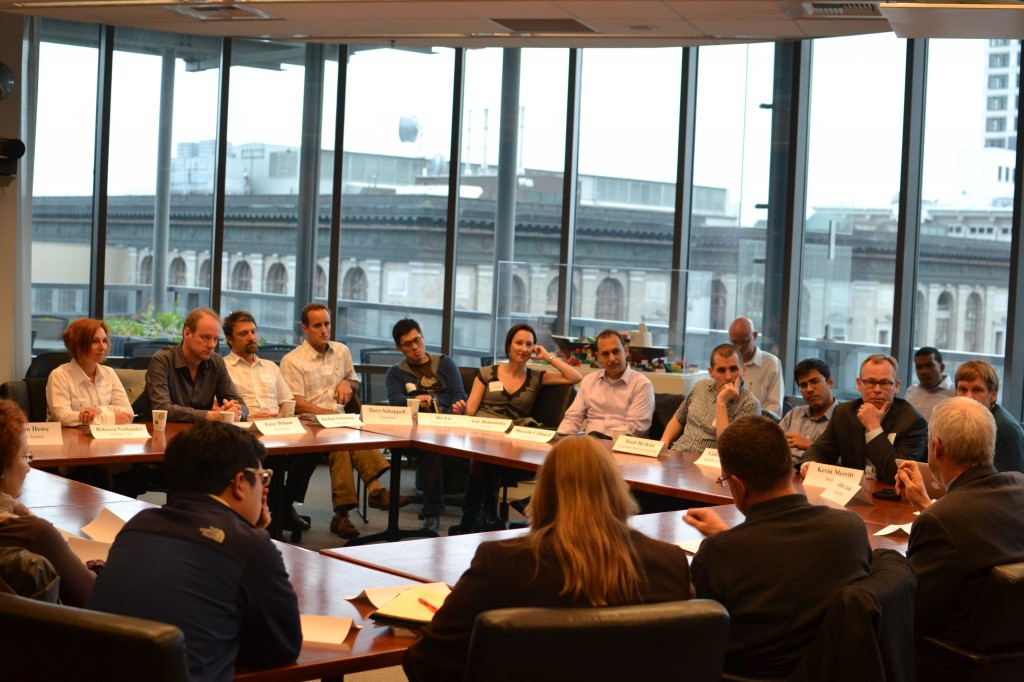 Socrata’s Kevin Merritt pointed out that New York successfully created a “digital roadmap,” which basically said “here’s where this city is going over the next five years.”

“It touched on 30 or 40 key areas, from elementary education to attracting startups to getting fiber optic communications throughout the city. And, basically, every time I see Bloomberg speak he is just reciting a little section of that,” he said.

McGinn said that the city needs help with that plan, and suggested a partnership with the startup community to help drive the process forward. He cited the effort of music community — supported by the city — to come together to promote Seattle as the City of Music. That included an installation at Sea-Tac Airport in which famous Seattle musicians provide announcements.

“Can we start thinking of that? Because you will drive more ideas, and we’ll just get a lot more done that way,” said McGinn. “We’ve done it with music, and I’d love to do it with startups.”

Cheezburger CEO Ben Huh said that when he walks through SeaTac airport he wants to feel like there are technology companies based here. “I would love to see a board near the entrance or exit to the airport that says: ‘These are the tech startups that are hiring in this town. When you come to this airport, we are offering you jobs.” Huh also encouraged McGinn to get more engaged in the community, possibly participating in a Startup Weekend.

Former Amazon.com worker Kim Rachmeler presented the idea to create more density of startups and those who support startups, suggesting that the Mayor support a branch of General Assembly. “It matters that you feel as though you are not alone and you are around people who understand. It matters that you feel as though you can walk down the street and go in a different doorway and get what you need. A startup requires an ecology that supports that, and by putting a lot of these services and people in a small geographic area, it creates that density that is supportive.”

Kushal Chakrabarti of Vittana added: “There are startups that are leaving here to go to the Valley because it is a density thing. You literally go into a Starbucks and you see the VC that you’ve been talking to, and that’s an opportunity to pitch…. We need those highly dense hubs, whether it be in Pioneer Square or South Lake Union, where that serendipity comes out.”

Mayor McGinn’s response: “I really like this idea, and I think we need to develop it more….We are not Silicon Valley yet. We are just not there. But whatever we can do to increase that density, and opportunity and it is the serendipitous encounters that are part of it.”

Facebook’s Peter Wilson said it is not so much about density as it is an educated workforce: “There are three things you need, which is educated people, research and money. We have the last two here, and the reason I’d do a startup in San Francisco versus here is I can hire new graduates with computer science degrees in California, and until you fix that, all of the other stuff is sort of window dressing.”

5. Strengthen ties between the city, startups and the UW

Kevin Merritt of Socrata presented the idea of getting engineers at the UW excited about startups, noting that big technology companies like Amazon.com and Microsoft already have the resources to run internship programs. “We need to create a deliberate consortium between the city, the venture community and the University of Washington to create program where engineers at the University of Washington have a quick-and-easy path to land in true startups, I am talking 5, 10, 20-person companies…. to acclimate those engineers to what’s going on industry and to plant the seed with them maybe working for a startup — versus working for Amazon or Microsoft — is something that you want to do.”