Don’t get me wrong. The growth of New York’s technology community over the past five years has been nothing short of amazing. The city that never sleeps is thinking big, pushed by a mayor who wants to diversify the economic base beyond Wall Street.

I love the Big Apple’s desire to build a world-class tech campus — something I’ve encouraged Seattle to do — and things like Mayor Bloomberg’s new “Made in NY Digital Map” are inspring.

But sometimes New York’s claims have a bit more sizzle than steak, and they often come with the myopic East Coast view that nothing really happens west of the Hudson River.

That’s how I felt after reading a report today from the Center for an Urban Future called New Tech City. The report does a nice job showcasing the growth of New York’s tech ecosystem, touting job growth in the IT sector as well as the rise of venture capital and tech accelerators.

It also compares NYC to other tech hubs, including Boston and Silicon Valley. And here’s where I have a beef. It fails to recognize Seattle, mentioning the city just twice in the 45-page report. (A chart about venture capital financing didn’t even include Seattle, comparing New York to Silicon Valley, New England, Texas, LA and San Diego). 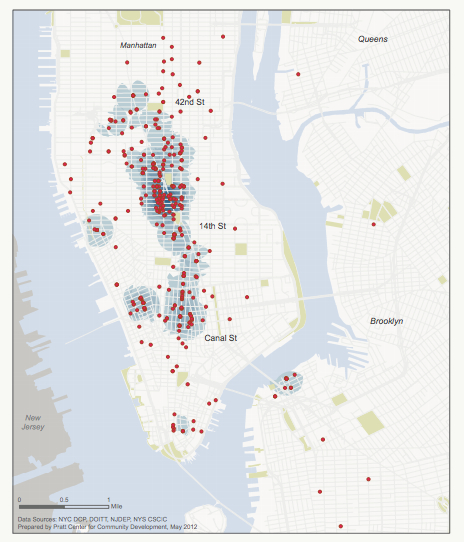 Perhaps it’s the Yankees-Red Sox rivalry, but there are repeated remarks about how New York has now claimed the No. 2 spot in the U.S. tech hub race from Boston. (A report measuring tech hubs out last month had already concluded that Seattle had surpassed Boston and Austin. It ranked New York as No. 2).

It may very well be the case that NYC is now No. 2. And as I’ve pointed in the past there are areas, namely venture capital financing, where New York has gained a ton of momentum. (See my earlier post: Let’s stop the Silicon Valley comparisons, and take a look at why NYC is kicking butt).

New York companies such as Gilt Groupe, Tumblr, ZocDoc and Buddy Media have raised huge rounds of financing of $90 million or more. But venture capital is just part of the story.

And here’s where I think Seattle gets short-changed in these discussions.

For whatever reason, two of the biggest success stories of the past year in Seattle eschewed traditional venture capital. (PopCap Games sale to EA for up to $1.3 billion, and Double Down Interactive’s sale to IGT for up to $500 million)

For its relative small size, Seattle also has the headquarters of more tech titans than most cities on the planet: Amazon.com, Expedia and Microsoft.  Combined, they have a market value of more than $350 billion. (Amazon alone has more than 1,000 open positions in the area)

Seattle also has attracted a growing stable of engineering centers from the California powerhouses like Facebook, Splunk, Hulu, Zynga, Jawbone, RichRelevance and others. Google — the first of these Silicon Valley titans to arrive — now employs about 1,000 people in the Seattle area, split between offices in Kirkland and Fremont.

Now, there’s a big debate going on right now whether these big tech companies are actually helping or hurting the startup ecosystem of Seattle, gobbling up the best talent and stopping innovative smaller companies from taking root.  But that’s a topic for another column.

I’ll stand by what I wrote back in April on the topic of NYC vs. Seattle: New York certainly has a lot of momentum, from city officials to venture capitalists to the media. But, at the same time, I wouldn’t trade Seattle’s technology community for New York’s.

After all, as much as I enjoyed reading the New Tech City report, I keep going back to its title page which included this image showcasing New York’s tech scene: 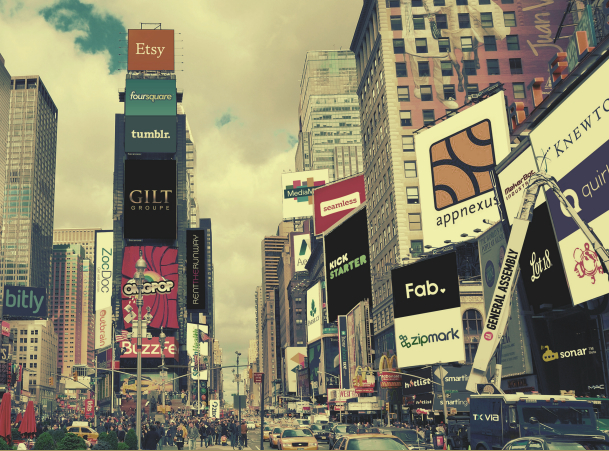 Some good companies for sure. But, ask yourself: What Seattle companies would you put on a similar skyline here?

And would you come to similar conclusion that Seattle — despite its well documented shortcomings — is a No. 2 to Silicon Valley? I think you could at least make the case.

Previously on GeekWire: The top 25 startup hubs in the world: Seattle ranks 13th