Last month, data from Placed told us how much America loves its fast food. Now we know a little more about what menu choices people are making at the counter.

Based on Part 2 of the April rankings of Placed Insights, a platform that is essentially the Nielsen TV ratings system or Google Analytics but for the offline world, millennials are the least-healthy fast food eaters while more than half of Taco Bell customers tried out the new Cool Ranch Doritos Locos Taco last month.

Last month, Seattle location analytics startup Placed unveiled the Placed Insights service, which tracks the paths and places of U.S. consumers and quantifies it to bring valuable information for where people go. 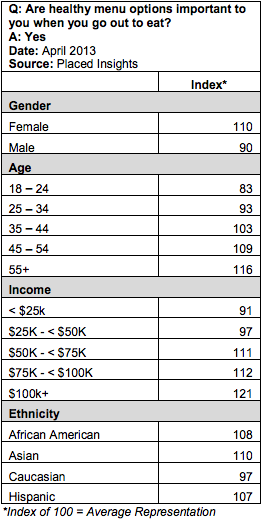 By measuring more than 70 million locations a day across more than 70,000 U.S. users who have opted-in to share their location, Placed Insights is able to measure around 1,000 businesses per day across 130 categories. That information is combined with extensive metadata and proprietary modeling, then normalized to represent the U.S. population.

Part 2 of the fast food study revealed that the 18-to-24 age group placed the least amount of importance on healthy menu options, while females and those with high incomes were more likely to avoid something like this (see table to right). The stats about the Millennials aren’t surprising considering the increasing childhood obesity rates in the U.S.

I haven’t tried the Premium McWrap yet, but the Cool Ranch Doritos Locos Taco is decent. The addicting, salty Doritos seasoning on the taco shell can actually be a little overpowering. And there’s my food review for the day.

Other findings from the study:

We wrote about Placed about a year ago, with Shim explaining how measured locations are aggregated across thousands of users to provide analytics to third parties. For example, the company put out a revealing study in February about how Amazon is impacting brick-and-mortar retailers.