Mobile phone usage is soaring, meaning people are consuming information while on the go at increasing rates. But where are those mobile users really consuming the content, and how can app makers more accurately pinpoint their locations?

That’s the dilemma that Placed is trying to answer. The Seattle startup today is rolling out a service that tells app makers whether their customers are more likely to be engaging with apps near a Starbucks or a Dunkin Donuts, an L.A. Fitness or a Bally’s.

“We are taking raw location that comes in through mobile devices and we’re actually processing that,” explains Placed CEO David Shim. “An app developer or someone who has mobile content can actually go in and see where were people consuming content.”

“They will show you how many users you have in a country, and you can dive into state and city,” he says. “It won’t show you what neighborhoods in a city, and it won’t show what businesses are nearby and it won’t show the rate of speed that people were moving when they were interacting with your content.”

Tracking one’s motion while using an app is especially interesting, since companies can use the data to deduce how people are interacting with apps.

By determining the rate of speed, Shim said that app developers could determine, for example, that 60 percent of the audience is moving at a speed greater than 20 miles per hour when using a specific app.

“You might dive into it and say: ‘Oh, they are actually (using the app) during the early morning and late afternoon, so they are on the bus,'” said Shim. If a determination was made that the consumers are using the app in their personal vehicles, a developer could make the case for implementing voice controls. 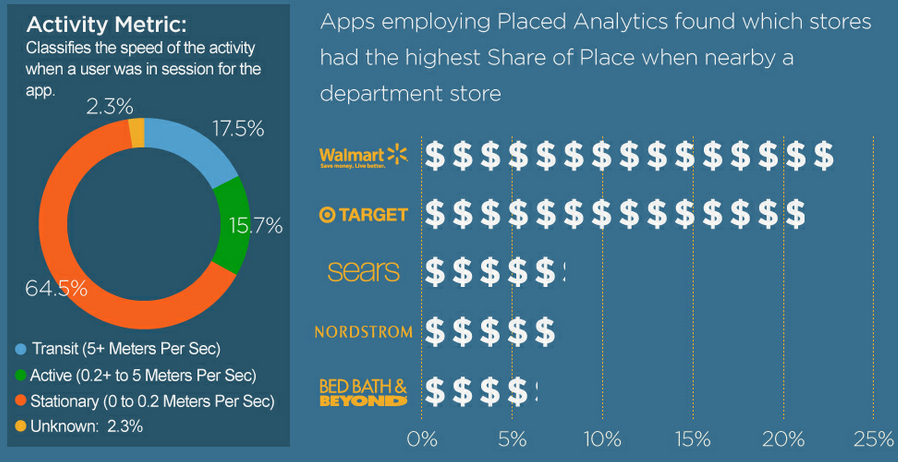 In addition, Shim said that the data can be used in order to better profile who is using mobile apps and where. That can become a powerful tool for those looking to lure advertisers, with mobile app makers able to segment their audiences to understand, for example, that their users are more likely to be closer to a Target than a Walmart or Starbucks than a Dunkin Donuts.

“Now, you have this persona that you can go out to advertisers and say: ‘When people are consuming our content, these are the places they are at,'” said Shim.

For example, a company like the private driving service Uber could use the technology to get a better sense of what was around the customers when they requested the cab.

“You might start to see a pattern of people requesting at bars, but they are walking two blocks away to actually pick up the cab,” said Shim, who previously worked at aQuantive, Farecast and Quantcast.

Companies like Uber — or for that matter Yelp or Urbanspoon — already have the raw location data. But Shim said those companies don’t have the mapping functionality or the accuracy to pinpoint the types of businesses that are nearby.

Shim declined to name mobile app developers that are using the free service, but he said they’ve already collected 1.5 billion raw locations. That has led to this infographic, which offers details such as Seattleites are three times more likely to be near a Starbucks than the national average.

“We limit it to a 20 X 30 grid and we will be able to tell you where activity occurs, but we will never let you identify an individual,” he says. “If there is only one data point for that user, we are going to toss it out. And that’s just to be on the safer side of privacy.”

The 13-person company — which raised $3.4 million from Madrona Venture Group and others in March  — plans to make money by providing customers add-on services. The service currently works with Android and iOS, with users of the service able to dump the software code into their mobile apps. 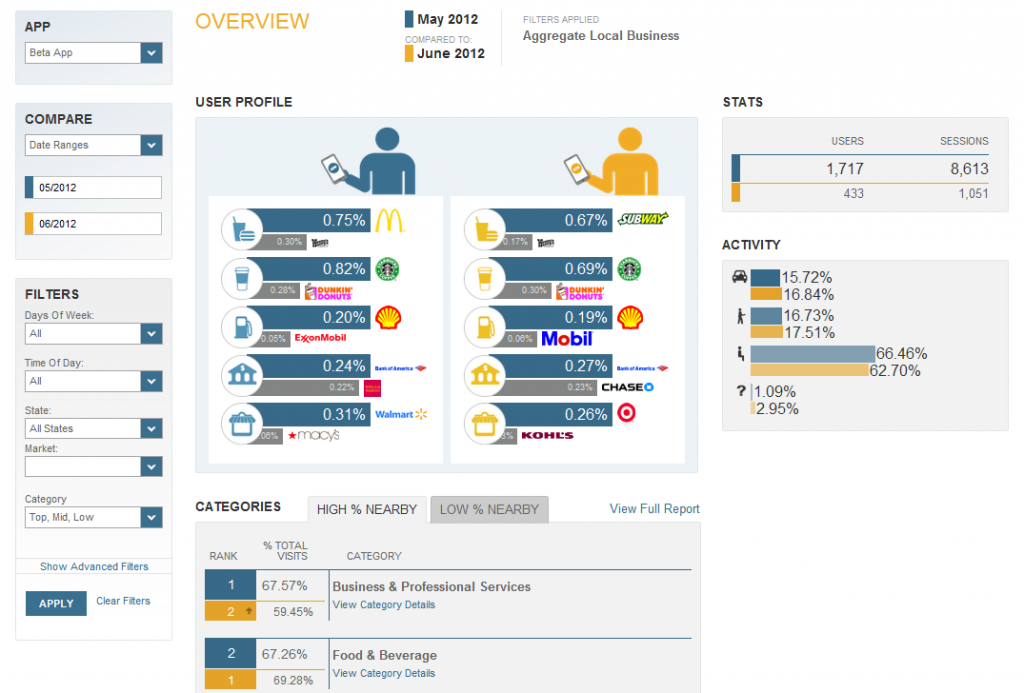