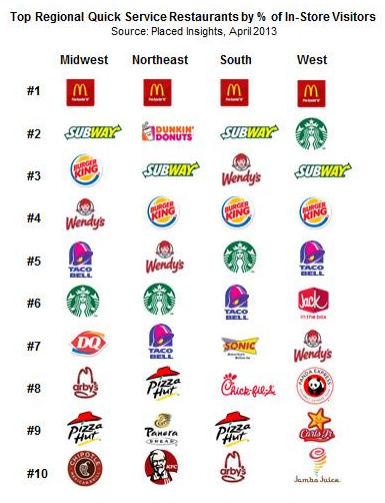 America sure loves its fast food.

That’s the latest from the April rankings of Placed Insights, a platform that is essentially the Nielsen TV ratings system or Google Analytics, but for the offline world.

Seattle location analytics startup Placed unveiled the service last month, which tracks the paths and places of U.S. consumers and quantifies it to bring valuable information for where people go.

By measuring more than 70 million locations a day across more than 70,000 U.S. users who have opted-in to share their location, Placed Insights is able to measure around 1,000 businesses per day across 130 categories. That data is combined with extensive metadata and proprietary modeling, then normalized to represent the U.S. population.

The April study reveals that McDonald’s was the most-visited “quick service” restaurant across the U.S. last month, as more than half of the consumers who opted-in visited the Golden Arches. Five other fast food restaurants finished in the top 10 for most-visited businesses overall in April, showing just how popular these eateries are.

Specifically focusing on the fast food joints, here’s how the top-10 rounded out for April:

The table above breaks that down by region, and not surprisingly, Starbucks dominates on the West Coast while Dunkin’ Donuts reigned supreme in New England.

Placed also breaks down its data by gender, age, income and ethnicity to better understand what types of people are going where. As you can see below, women favor McDonald’s, the younger folk prefer Taco Bell and the wealthy like Wendy’s: 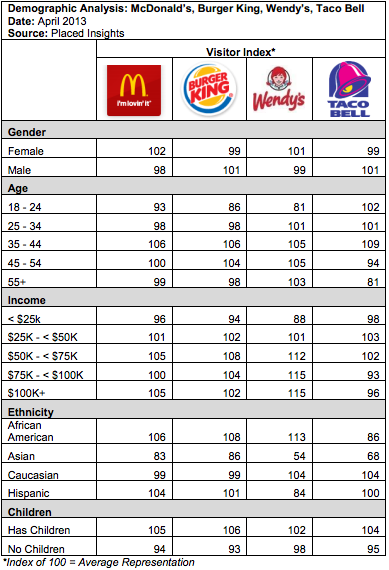 We wrote about Placed back in June, with Shim explaining how measured locations are aggregated across thousands of users to provide analytics to third parties. For example, the company put out a revealing study in February about how Amazon is impacting brick-and-mortar retailers.

Placed, which also offers a product called Placed Affiliate that lets developers monetize location data for market research instead of ads, raised $3.4 million from Madrona Venture Group and others about one year ago.