After two years of hard work, a name-change and an incredible amount of data crunching, Placed has become the first company to offer a ratings service to help understand where people are going in the physical world.

“This is everything that Placed has been working on these past two years,” CEO David Shim said.

The Seattle location analytics startup today unveiled Placed Insights, a platform that is essentially the Nielsen TV ratings system or Google Analytics, but for the offline world. Placed Insights tracks the paths and places of U.S. consumers and quantifies it to bring valuable information for where people go. This information, which is delivered in “near real-time,” allows companies to target advertising and app developers to see where people are consuming content.

We wrote about Placed back in June, with Shim explaining how measured locations are aggregated across thousands of users to provide analytics to third parties. For example, the company put out a revealing study in February about how Amazon is impacting brick-and-mortar retailers.

By measuring more than 70 million locations a day across more than 70,000 U.S. users who have opted-in to share their location, Placed Insights is able to measure around 1,000 businesses per day across 130 categories. That data is combined with extensive metadata and proprietary modeling, then normalized to represent the U.S. population. 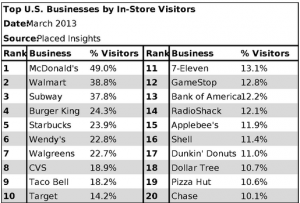 The results of the first Placed Insights rankings from March 2013 are pretty interesting. McDonalds led the way, with nearly half of those 14 and older visiting the fast food joint last month. Walmart finished second, with nearly three times as many visitors as Target. GameStop (No. 12) and RadioShack (No. 14) finished as the top electronic retailers.

One valuable thing about Placed Insights is its ability to compare month-to-month changes. For example, it found that pizza and fried chicken establishments declined the most in visits due to the end of football season, while more people dined at Buffalo Wild Wings because of March Madness.

And where do the youngsters like to eat? How about the older folk? Placed Insights measures that, too. In-N-Out and Buffalo Wild Wings catered to the late teens and early 20’s goers, while places like Caribou Coffee and Culver’s often brought in people over the age of 55: 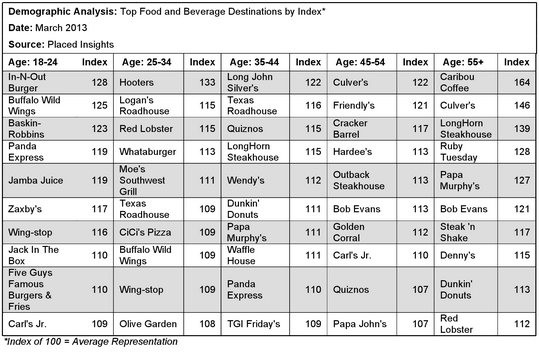 Also, categories that saw the biggest increases from January included “Financial Planning and Investments,” due to tax season, and “Travel & Tourism — Lodging,” due to Spring Break travelers. 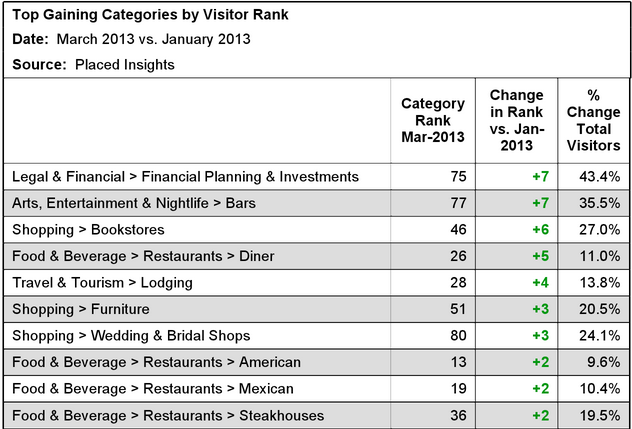 Placed Insights can also analyze by demographics including gender, age, income, ethnicity, children in household and education, as shown here. 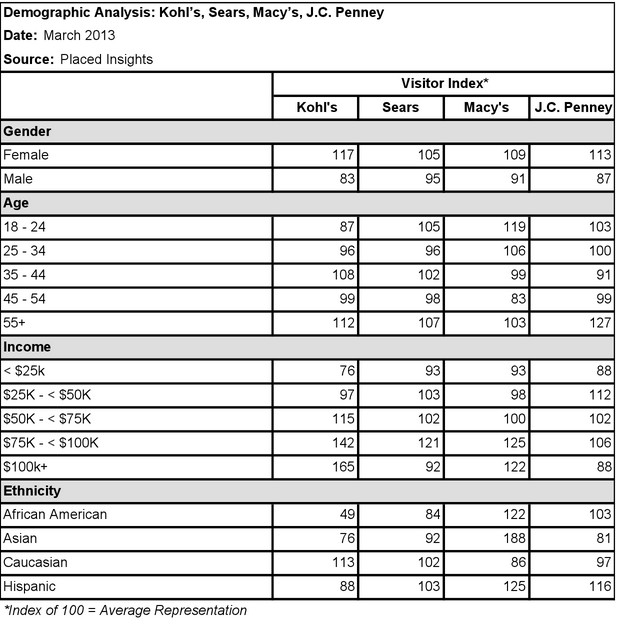 Placed, which also offers a product called Placed Affiliate that lets developers monetize location data for market research instead of ads, raised $3.4 million from Madrona Venture Group and others about one year ago.