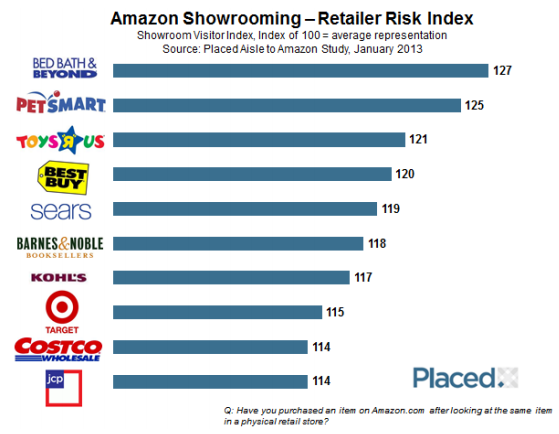 Online shopping has brought upon a new phenomenon called showrooming, a term describing the act of browsing brick-and-mortar stores and then later making the purchase it online often at a cheaper price. With the abundance of smartphones, showrooming is taking place around stores more than ever and companies like Target and Best Buy have already implemented year-round price-matching programs.

Perhaps there has been no company that’s cashed in on this more than Amazon. Now, thanks to Seattle location analytics startup Placed, we have some data on exactly how much Amazon is affecting physical stores.

Placed used 14,925 U.S. survey respondents and combined that with nearly one billion U.S. location data points to measure customers of Amazon and their path in the physical world.

“Placed Aisle to Amazon is the largest study to date quantifying the impact of showrooming for brick-andmortar retailers,” David Shim, founder and CEO of Placed, said in a press release. “The study clearly shows that showrooming is more than media hype, and a real problem that retailers need to address. By putting a number to showrooming, retailers can start to better understand the impact, and take action based on data versus anecdotes and assumptions.”

Here are some of the key findings:

We wrote about Placed back in June, with Shim telling us at the time that the service allowed app developers to see where people are consuming content. Measured locations are aggregated across thousands of users to provide analytics to third parties.

Placed expanded its location analytics in August and raised $3.4 million from Madrona Venture Group and others last March.