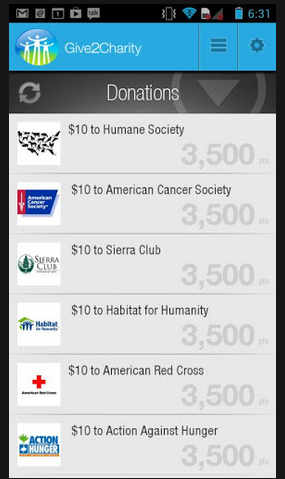 The new service is called Give 2 Charity. Users install the app, grant it location permissions and then choose a charity to donate to after racking up enough points.

“This is one of the simplest and low friction ways for smartphone owners to help charities year round,” said David Shim, founder and CEO of Placed.

Give 2 Charity was born after Placed analyzed the response from over 250,000 downloads of the Panel App, which collects user location data and gives participants rewards like gift cards and other incentives, depending on the chosen panel..

“When we added charitable donations to the Panel App alongside sweepstakes and guaranteed prizes, we saw a significant response from location panelists opting to donate to charities,” Shim said. “The launch of Give 2 Charity is to build upon that initial response, and reach a wider audience of people who want a simple way to give back to the world.”

Users earn points everyday they have the app on their smartphone. Once you’ve earned enough points, you can redeem for the charity of your choice. Placed keeps track of all redemptions and makes a donation to each charity at the end of the month. People can increase their donation by referring friends to download the app and answering in-app surveys to earn additional points.

We wrote about Placed back in June, with Shim telling us at the time that the service allowed app developers to see where people are consuming content. Measured locations are aggregated across thousands of users to provide analytics to third parties.

Placed expanded its location analytics in August and raised $3.4 million from Madrona Venture Group and others in March.

Previously on GeekWire: How geeks do charity: Use your GPU to churn out goals