Madrona Venture Group managing partner Tom Alberg has witnessed and participated in the rise of the aerospace, wireless and e-commerce industries in Seattle as an executive and investor, serving as Boeing’s principal counsel, a key McCaw Cellular executive and an early Amazon investor and longtime board member.

His next goal: putting Seattle on the map as a global center for financial technology.

Wait, what? Can that be right? After all, Seattle is thousands of miles from the country’s largest financial centers. The region’s hometown national bank, Washington Mutual, disappeared as a standalone institution during the financial crisis a decade ago. And the volume of investment in financial tech startups in the Seattle region pales in comparison to New York and Silicon Valley.

Alberg recalled his Madrona colleague Rex Hughes showing him a ranking of the world’s 100 largest financial centers. Seattle wasn’t even on the list.

“Hopefully it was 101, maybe,” Alberg joked during a recent tech conference at the National Nordic Museum in Seattle.

But as he studied the list, Alberg came to believe it was overlooking a fundamental reality of the new economy. The list focused on traditional commercial banking centers, and ignored the technological underpinnings for fintech, as the sector is commonly known. And through that lens, he believes, the Seattle region has the potential to become a powerhouse.

“If you think of any category — cloud, AI, mobility — Seattle’s a leader, and in fintech it hasn’t been,” Alberg said after the panel discussion. “This is the last remaining piece that we need, is to make ourselves more of a fintech center.”

Can Seattle really become a fintech hub? What would it take? And what would it mean for the region’s tech sector if it happened? Here’s what we learned from our research and interviews with key players in the field.

The numbers: Fintech companies in the Seattle region raised a total of $703 million in funding in 74 deals from 2014 through the first five months of 2019, according to data from Seattle-based PitchBook. That was less than 2 percent of the $42 billion raised by fintech companies across the country over the same time period. Startups in the New York area raised $8.2 billion in 738 deals, and those in San Francisco and Silicon Valley raised nearly $19.5 billion in more than 1,000 deals.

The traditional financial infrastructure in New York and the Bay Area creates a natural flow of entrepreneurs and talent to stoke fintech startups in those regions. Big bank employees are increasingly seeking out a different culture and faster growth than they get in the traditional financial sector, said Paul Condra, lead analyst for emerging technology at PitchBook, who worked previously as a payments and financial technology analyst for Credit Suisse and BMO Capital Markets in New York.

“It’s a little bit of a different skill set. For traditional bank employees, it’s much more customer-relationship driven, and these new fintechs are very much software-technology driven,” he said. “But you do see that crossover.”

Seattle doesn’t benefit from that kind of crossover, and as a result, the venture-backed startup activity in the region is on a smaller scale, literally. 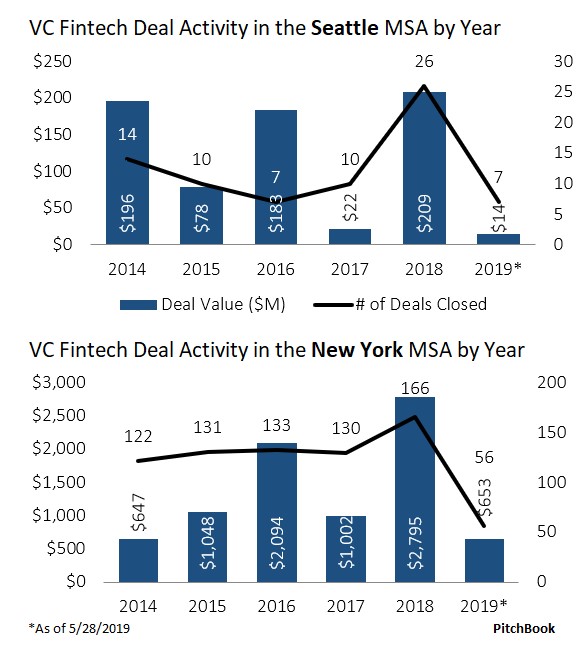 A related hurdle: Seattle doesn’t have a major venture capital firm known for specializing in fintech.

Madrona had success in this area with its investment in ShareBuilder, acquired by ING Direct in 2007. More recent deals include its investment in Suplari, which applies artificial intelligence technology to the software procurement process, and the firm has been actively considering potential new fintech investments.

In addition, Madrona has also formed a coalition of financial institutions interested in expanding Seattle as a fintech hub, and it’s exploring new ideas in fintech through its Create33 entrepreneur center.

“I don’t think we thought of Seattle as an area where financial innovation was happening. It just wasn’t completely obvious. The truth is, there’s a lot of (fintech) activity in the city and the Pacific Northwest,” said Hope Cochran, a Madrona managing director who was previously chief financial officer at Candy Crush maker King Digital and telecom company Clearwire, and also has extensive experience with microlending initiatives.

The evolving nature of fintech is expanding the list of companies that might qualify for the designation. Cochran’s definition: any technology company disrupting a payment flow.

Much of the industry’s focus is on innovation in consumer banking technologies, which are ripe for breakthrough ideas as new generations of consumers become adults, with expectations of seamless technology experiences.

But based on her own experience as a CFO, Cochran said the opportunities for innovating in corporate finance are also significant.

“I come at it from being in the corporate seat,” she explained. “The systems are archaic and old, and the infrastructure behind financial systems and trading is just frustrating from that seat. I think it would be shocking to all who haven’t been in that seat to realize how manual things are, how long things take to settle.”

Seattle’s strengths: That plays into Seattle’s position as an enterprise technology hub, which is one of the region’s indirect inroads into the world of fintech.

The cloud plays a key role. Amazon Web Services and Microsoft Azure, the world’s two largest public cloud services, are based in the Seattle region, along with a large Google Cloud engineering center in the city.

Seattle is home to engineering centers for payment technology companies Stripe, Square and others, in addition to massive digital payments systems operated by Amazon and Starbucks.

Seattle’s cloud prowess is what prompted JPMorgan Chase to establish a cloud and cybersecurity engineering center, which has grown to 100 people in the past year, and recently expanded its footprint to accommodate as many as 350 additional employees in the coming years. JPMorgan absorbed Washington Mutual during the financial crisis, so it’s symbolic that the new engineering centers are in office towers originally built for the Seattle-based bank.

“We definitely would love to see more of the financial services organizations coming here,” said Todd Hrycenko, the head of cloud, application and platform security for JPMorgan Chase and the leader of the Seattle cloud engineering center. “Many of them are making the cloud journey, and many of them are trying to transform into highly agile digital organizations. There is a tremendous amount of tech talent here and a lot of great people that can help them do that.”

One of those financial services companies, Capital One, closed its Seattle engineering center recently, but startup and tech leaders said they believe the decision was specific to Capital One and not an indication of a broader trend in the Seattle region.

Recent M&A activity also highlights the intersection of the cloud and finance in the Pacific Northwest. Bellevue-based Apptio, which helps companies track their spending on cloud services, was acquired earlier this year for $1.9 billion by Vista Equity Partners, and promptly made its own acquisition, buying Portland’s Cloudability cloud cost-management startup.

Another early player in financial technology, Balance Financial, was acquired in 2013 by Blucora and folded into the Bellevue company’s TaxAct subsidiary.

Seattle is also producing a growing number of fintech startups, including those on our list below, in addition to a cadre of cryptocurrency ventures such as Strix Leviathan, Bittrex and CryptoSlate that are part of the recently-announced Cascadia Blockchain Council.

Notable fintech startups in Seattle and the Pacific Northwest. Sort and scroll for full list. Send changes and suggestions to tips@geekwire.com.

International money transfer company Remitly is the most well-known and established Seattle fintech startup. Founded eight years ago, the early Techstars Seattle grad describes itself as the largest independent mobile remittance provider in North America. Remitly has raised $175 million to date and employs 200 at its headquarters with an additional 814 people at offices in Nicaragua, the Philippines, and London.

“Remitly has demonstrated to us that you can scale a world-class fintech company here in Seattle,” said Tony Huang, CEO of Seattle-based Possible Finance, a fast-growing small-dollar loan provider. Possible Finance just raised $10.5 million in additional funding of its own.

One of the longest-running ventures in the region is online bill-paying company doxo, founded in 2008. The company’s CEO, Steve Shivers, said there is a hunger to join fintech startups. “There’s a lot of great talent in this market that sees the potential and wants to join fintech ventures,” he said. “The desire is there.”

Startup leaders recognize the challenge created by the lack of a major national bank headquarters. Yes, banks such as Washington Federal, Columbia Bank, BECU and Banner Bank are based in the region and manage billions in assets. But that alone doesn’t give the region the momentum it needs.

“A major concentration of banking infrastructure providers is necessary for Seattle to become a global fintech hub, and likely not just one major bank but 3-to-4 institutions at a minimum,” said Chris Hopen, CEO of credit card usage startup Switch.

In the meantime, Remitly CEO Matt Oppenheimer said his company has been able to recruit and retain top talent despite the fact that the region isn’t a major financial hub.

“Seattle’s fintech scene has flown under the radar with a few companies in the space like Remitly, Russell Investments, and Avalara bringing some notoriety in recent years,” said Oppenheimer, who is also a BECU board member. “I’d like to see more fintech startups call Seattle home given our growing tech scene and propensity to improve the world around us. This city has a proven track record for building companies that disrupt legacy brands and could significantly contribute to the financial services category.”

BECU last year launched a fintech incubator with the University of Washington, working with four companies so far:

Given the machine learning and AI talent in the region, Seattle entrepreneurs could find a niche with startups that focus on specific financial services segments. Nate Derby, CEO of predictive marketing analytics startup Stakana, said financial institutions have lagged behind in operational innovation, which creates an opportunity.

“Serious use of AI, for example, in the banking industry is limited to outliers, though adoption and implementation is expected to grow exponentially over the near term,” he said. “As this innovation focused on operational efficiency occurs, I believe you will begin to see Seattle’s influence in fintech grow as well.”

Macro trends: Huang, the Possible Finance CEO, is even more bullish, based on larger changes in the tech world.

“Even if there are no major banks in the city, I do think it is inevitable that Seattle becomes a major fintech hub,” Huang said. “Aside from the rise of fintech startups like Possible Finance and Remitly, we are also seeing the trend of every major consumer tech company becoming a fintech company. Notable examples include the Apple Card and Google Pay. Amazon and Microsoft will inevitably launch fintech products that will become major parts of their ecosystem.”

“That will breed lots of fintech innovation and talent in Seattle,” he said. “New fintech companies also look more like Amazon than Wells Fargo, so Seattle’s abundance of engineering talent is a more important factor than the lack of banking talent.”

Alberg, the Madrona managing partner, is also optimistic. “I think we have the underlying technologies,” he said, “and I think it will be a big part of our future.”