PayRange wants to help you buy items from a vending machine without cash or coins.

The Portland-based startup today announced a $12 million funding round to fuel development of its vending machine payment technology. The Series A round was led by Matrix Partners and included participation from Nyca Partners, Google Ventures, and individual investors like former Google Payments head Osama Bedier and PayPal co-founder Max Levchin. 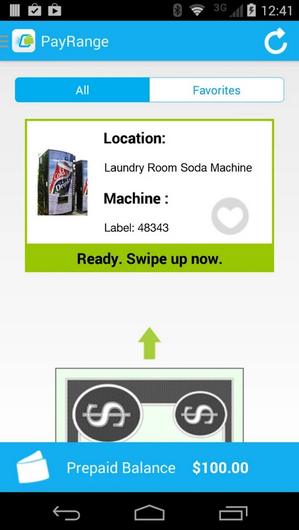 PayRange, founded in 2013, develops a small $49 Bluetooth-enabled dongle that can be plugged into the back of a vending machine, enabling users to purchase items with their smartphones. Customers use PayRange’s mobile app to select a payment method — credit card, Apple Pay, Android Pay (coming soon), etc. — and choose a nearby machine, which will show users their balance.

The company says that 80 million people in the U.S. make purchases from around eight million vending machines each day — 98 percent of those purchases, however, are made with cash and coins since just 5 percent accept credit and debit cards.

PayRange CEO Paresh Patel told GeekWire that his company differentiates itself from the competition because its technology does not require a network connection on the machine itself.

“In other words, we solve the last mile problem,” he said. “We can bring payment to machines that would not have had any other connectivity.”

The 18-person company also lets customers see real-time inventory analytics and user purchasing data. So far, PayRange is working with more than 680 operators in the U.S. and Canada that manage a total of one million vending machines with the company’s technology.

Paresh, a veteran of the automated retail industry, previously founded a similar startup called VendScreen, but left the company in April of last year after a dispute with investors.

As a result of the new funding, former Square executive Jared Fliesler is joining PayRange’s board of directors. Total funding for the company is now just under $15 million.