Concur Technologies made a name for itself streamlining and simplifying expense reports, and now its longtime CEO Steve Singh is back to disrupt another budget line item known to cause headaches for companies: the corporate credit card.

Singh pulled back the curtain on his latest venture in an interview with GeekWire: a combination hardware/software company called Center, which is producing a next generation corporate credit card, complete with a built-in touchscreen and battery, as well as the software to integrate the card into a company’s budget. Digitizing the card, Singh says, will allow companies to get real-time updates on spending and adjust budgets on-the-fly.

Despite everything going on under the hood, the card looks, feels and acts just like any other credit card. 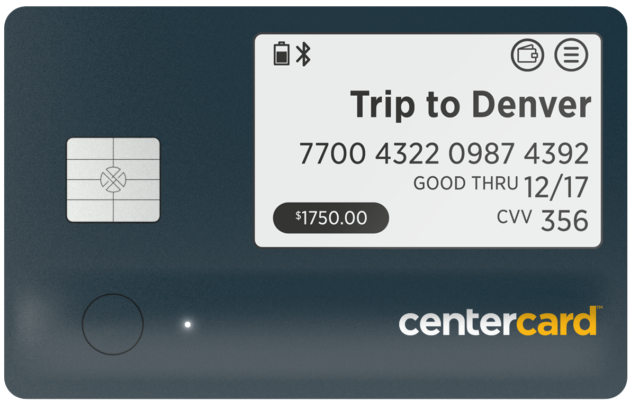 “Nobody has been able to pull this off,” Singh said. “There’s not one product in the marketplace where you have a digitally-connected card that’s the size of a regular card.”

The new CenterCard will be available for businesses starting in June, Singh said. Center is partnering with local banks, such as Washington Federal in the Seattle area and Central Bank of Kansas City, to offer the card to business customers.

The market for corporate credits is huge and fragmented, Singh told GeekWire, and in need of innovation. Singh said CenterCard will focus on small to mid-sized businesses where discretionary costs, such as travel expenses, can make up to 20 to 30 percent of expenditures. Corporate cards tend to be disconnected from a company’s overall budget, so it’s tough to track these expenses.

The people using the card will always know how much they have left on a travel budget, for example. Users can swipe the touchscreen to toggle between different spending accounts as well.

Center is right in Concur’s wheelhouse of simplifying business expenses, but with one big difference, the credit card itself. Building a computer and a battery inside such a small card is a big hardware lift.

“This business actually has components to it that are not traditional software, it is also a hardware company. This is a sophisticated computer inside this card along with the memory chip along with a battery. A hardware business is very different than what Concur does.”

By creating its own card, Center is effectively serving as a bank issuing credit to companies, something Concur does not do. The company makes money the same way any other credit card provider does, through fees paid by merchants every time someone swipes the card. The budgeting software comes with the card, free of charge, Singh said.

Singh is the founder and sole investor of Center, and he would not say how much money he has put into the company. Singh has been CEO of Concur, which sold to SAP in a $8.3 billion blockbuster deal in 2014, since 1996. Center isn’t looking for investors right now, but Singh said he might look at bringing in some more cash as the company grows.

The 38-person company has an office in Bellevue, Wash. as well as Kitchener, Ontario. Singh is the chairman and doesn’t run the show day-to-day. That job falls to Dietmar Wennemer, the chief operating officer and a former Blackberry executive. Much of the Ontario office came from Blackberry, which should allay some security concerns given the mobile company’s reputation for building the most secure devices.

“To actually produce something that has a touchscreen interface with a battery that can last for weeks and has the capacity to update software, it takes real expertise to pull this off,” Singh said. “That’s why my idea was if you want to do this have to go out and find the best people in the world.”

Singh’s wife Heather also works at the company as its chief marketing officer. Singh said he admires her passion for the company, and he has noticed how it bleeds into their evening conversations.

“She used to joke with me when I used to come home and it would take me half an hour to decompress and I’d still be talking about work,” Singh said. “Now I come home, and she’s the one doing it.”

The card is the culmination of close to two years of work. In the summer of 2015, Singh made an investment in a company called TouchstoneID, which eventually evolved to become Center. At the time of the investment, TouchstoneID sported this tagline: “Everything that defines your identity in one location. Available at the touch of your finger, anywhere you need it.”

Singh said the CenterCard is part of a larger vision. Singh pointed out that every device is becoming connected, and there are several important identifiers in everyone’s wallet, like a driver’s license, or even passports that could go digital in the coming years.

For now, Center is focusing on business customers, but Singh could see the value for families as well. He pictured a situation where a family could use the technology to build and monitor budgets for their children. The cards too could evolve over time, Singh said.

“Our view is this is just step one in the process,” Singh said. “You could see a version of this whether it’s a year or two years down the road that’s just all screen. You could see having your driver’s license on this card, or for that matter your mobile passport.”