Amazon’s quirky Treasure Truck, which has delighted shoppers in the Seattle area over the past several months with special deals, appeared at CES today in the Central Plaza right in front of the Las Vegas Convention Center.

It was prime placement for the mobile retail unit, and attendees seemed to be gobbling up the merchandise from the oddly-designed vehicle. In addition to free Treasure Truck hats, CES attendees could enter to win a GoPro and an Amazon Echo Dot. A representative of Amazon said that there are two Treasure Trucks in existence, and someone had to drive this one, nicknamed Scout, all of the way from Seattle.

Google tells us it’s a nearly 17-hour drive, or 1,116 miles, from Seattle to Las Vegas. No word on how much faster that would be with Marshawn Lynch behind the wheel.

The Treasure Truck’s appearance at CES could signal that Amazon is looking to take the Treasure Truck concept on the road — literally. To date, it has mostly operated in Seattle, providing shoppers in its hometown with one-of-a-kind deals on everything from cameras to free-range turkeys.

After an unusual delay, the Treasure Truck officially hit the road last February in Seattle.

Doesn’t it look just beautiful among those Las Vegas palms? 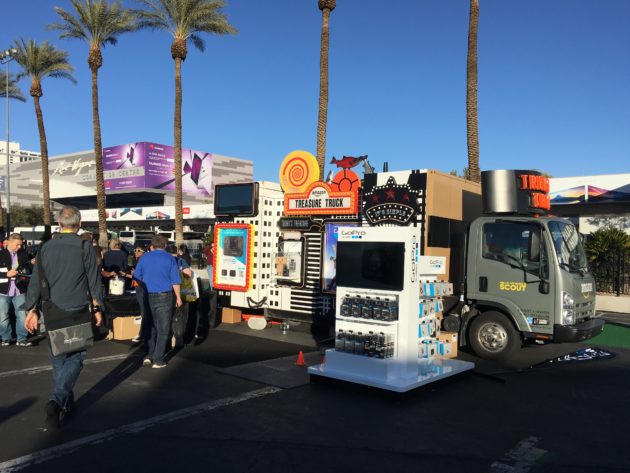