My Saturday morning routine was interrupted with an alert from Amazon’s notoriously shy Treasure Truck, announcing their very first deal, a GoPro HERO4 Black for $179. That is a screamingly good price on a cool gadget that currently sells for $429 on Amazon, so a perfect opportunity to try the Treasure Truck on its debut. The process was easy and fun. 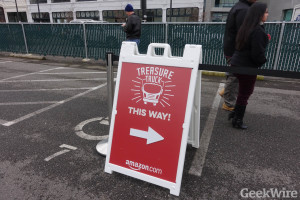 Wait a second, you may be asking — what the heck is the Treasure Truck? In short, it’s a delivery vehicle for deals, the latest move by Jeff Bezos & Co. to expand beyond their digital roots and into the physical world. The Treasure Truck finally launched in Seattle on Saturday, after an unexplained seven-month delay.

As with the Amazon Bookstore, Amazon Fresh, Amazon Flex and countless other Amazon inventions, the company’s hometown is serving as the test market for this project. Amazon says the Treasure Truck is like a “neighborhood ice cream truck” — a “four-wheeled joy machine” dishing out deals and bringing e-commerce into the mobile era, literally.

I wouldn’t go that far, but after trying out the Treasure Truck today, I’d definitely use it again. 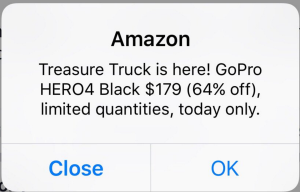 Here’s how it works. First, to find the Treasure Truck, you have to be in Seattle, and you have to have the Amazon app installed on your phone. You can find it in the main menu of the app to see what’s on the truck today. You can also get alerts about the current deal. Today’s alert came promptly at 11AM. 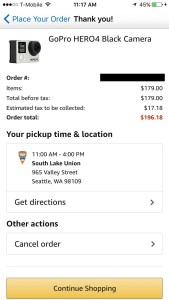 You actually buy the item on your app, which then instructs you to visit the pickup location. Today the Treasure Truck was setup in a parking lot at the south end of Amazon’s South Lake Union campus. I was lucky that I ordered the GoPro right when I saw it, as the deal sold out in the first 45 minutes of the offer.

Parking lot attendants directed me to a parking spot next to the Treasure Truck which was setup next to a couple of white tents. The tents were staffed by cheery Amazon staffers in blaze orange Helly Hansen jackets toting Fire tablets.

Pickup of my purchase was remarkably easy. Literally all I did was give them my name which they checked off the list on their tablet. There was no verification or ID check, though maybe you have to give them more info if you have a common name. Maybe I’m missing something, but it feels somewhat easy to game this system.

The Treasure Truck itself felt like a carnival hawker, with colorful marquee-style signs, LED message boards and a display case for today’s treasure. Rotating at the top of the truck was a bright yellow sign saying “Hello Seattle”, along with some salmon spinning on a wheel in front of a bubble machine, of all things. The Treasure Truck even has its own name: Scout. 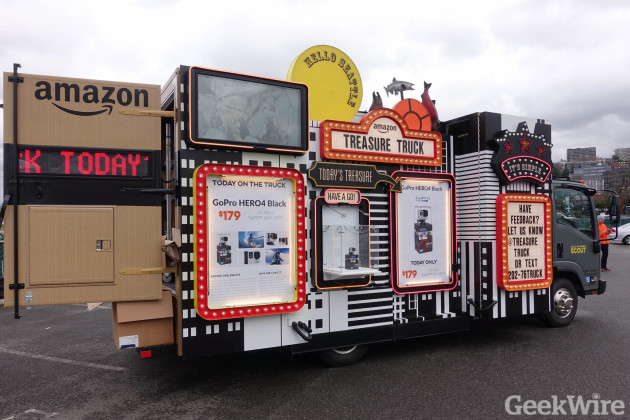 There was a steady stream of folks picking up their deals this morning, with many of them stopping for a selfie moment in front of the Treasure Truck.

I chatted with a few of the Amazon staff, asking them what caused the mysterious 7-month delay. All they said was that they “wanted the customer experience to be perfect.”

I also inquired on how often we would see Treasure Truck deals in Seattle. Will it be daily, weekly or monthly? The only answer I got was that it will “happen periodically and it will be a surprise.” 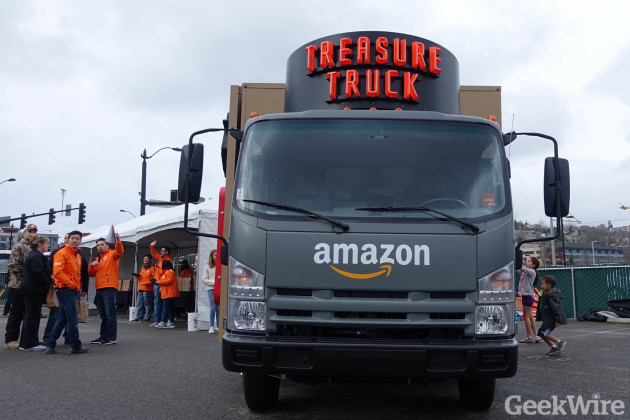 The Treasure Truck is a peculiar promotion for the e-commerce giant. They instantly sold hundreds of GoPro’s this morning, though at such a steep discount and with all of the staffing and logistics involved, it is hard to imagine that it was profitable.

Perhaps it is an elaborate PR stunt, or maybe a move to unload overstocked items. Curiously you did not need to be an Amazon Prime member to get access to the deal, though perhaps that is coming in the future. The truck did have some semi-prominent Amazon Prime branding on its backside.

It will be interesting to see the quality and quantity of deals that Amazon brings to the Treasure Truck and whether they can maintain the element of surprise and excitement that they did today.