After all, the tech giant launched 20 years ago as an innovative online bookseller, offering consumers an alternative to purchasing products from traditional brick-and-mortar stores. It went on to ultimately change how people bought and read books with its vast shipping network and Kindle devices, while putting many independent bookstores out of business in the process.

But Jennifer Cast, one of Amazon’s first executives who recently returned to the company after a 13-year hiatus, isn’t surprised that the company is opening the full-fledged retail location — its very first — on Tuesday in Seattle’s University Village shopping mall.

“You ask why now, but in some ways, it’s kind of like, why not?” Cast told GeekWire from inside Amazon Books, where employees bustled around on Monday evening, putting the final touches on Amazon’s new store. “We’ve got this great information that can help people find books they love in a different way. It’s a great mixture of art and science for us.” 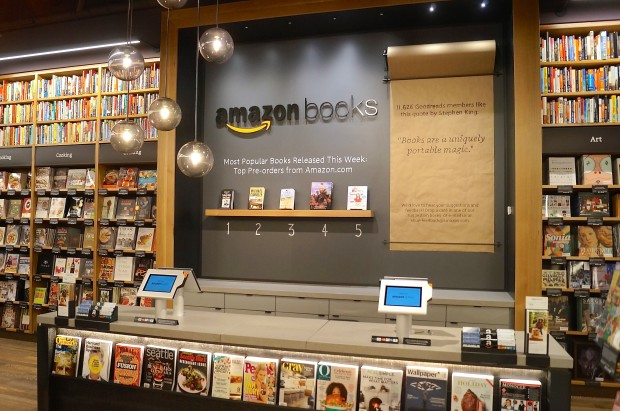 That vision is the core of Amazon Books, where Amazon is utilizing data and information from its massive online store inside a brick-and-mortar building that smells of printed paper and also features the company’s newest hardware products.

“To be a great bookstore, we really think that bringing the information from Amazon.com to this store helps people have a different view into books,” said Cast, VP of Amazon Books. “That’s the goal. We believe that we can create a different kind of store and one that customers will want.”

The irony of Amazon opening a new physical bookstore is not lost on some industry watchers.

“If you go back 15 years ago, they were considered a bright new thing on the landscape,” said John Mutter, co-founder and editor-in-chief of the book industry newsletter Shelf Awareness. “Now, especially to a lot of publishers and independent booksellers, they are considered the Darth Vader of the business.” 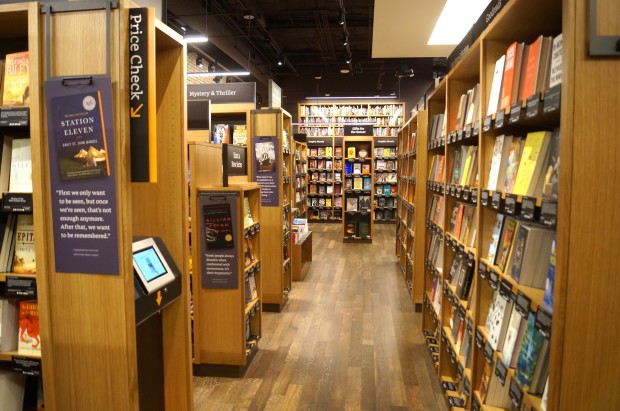 Even so, Amazon is consistently attempting to shake up the status quo, experimenting with new business concepts and ideas, something that now applies to bookstores.

When you first walk into Amazon Books, a 7,400 square-foot space previously occupied by a sushi restaurant and flanked by high-end retailers and eateries like Banana Republic and Din Tai Fung, it feels like a typical bookstore.

But as you approach the shelves, you’ll notice that each book is positioned with its cover exposed, versus what you may find in a traditional store that only shows the spine.

“One of the tenets we started with was that we wanted books to be the hero of the store,” Cast said. “And they call to you when they’re faced outward.” 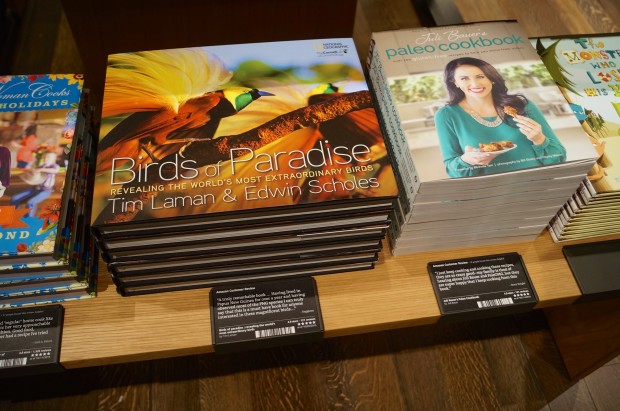 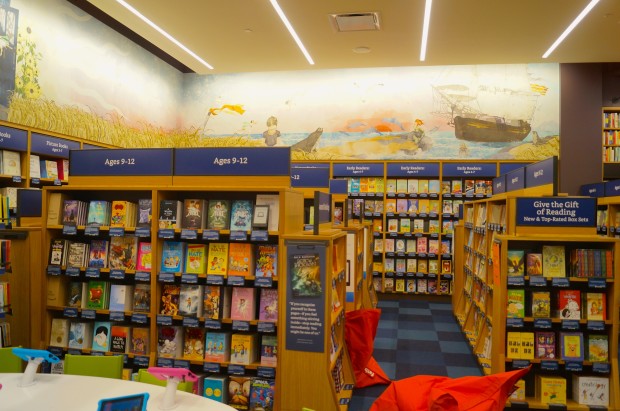 “What we are doing that is really different — and what we hope is innovating to help customers find books they will love — is taking all this data that is inside dot-com and bringing it into a store for the first time,” Cast said. 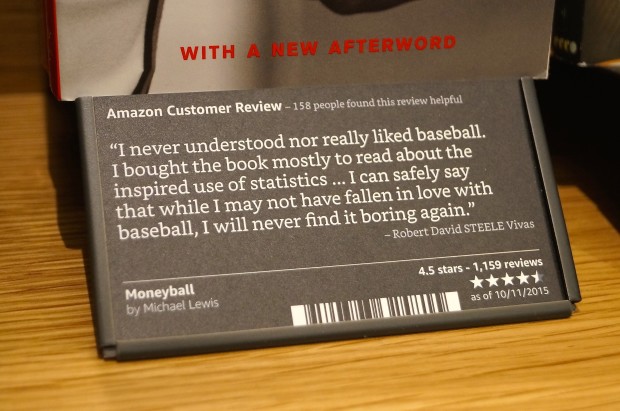 Ironically, Amazon — which started with the mission of selling nearly every book on the planet — is taking a minimalist approach in the physical store. Just 5,000 to 6,000 books will be sold at Amazon Books, a low number compared to other bookstores.

“We believe that we can create a different kind of store and one that customers will want.”

Given that Amazon places its books with covers facing outward in a relatively small space, the company needs to be efficient when selecting book titles to sell inside its store.

To do so, it uses data from its online hub to curate the most popular titles. Almost every book in the store carries a 4-star rating or higher on Amazon’s 5-star scale. The company uses a combination of that rating, along with expertise from its own Amazon.com editors and book curators, to ultimately figure out what titles should be featured at Amazon Books. It also uses information from Goodreads, the social book review site that Amazon acquired in 2013.

“We love that mixture between creativity and data, and understanding our customers and continually trying to learn how we can make a better store for them,” Cast said. “This is different because it’s physical, but we’ll apply the same discipline and same passion for building and improving as we do with our other online stores and just do it in this kind of location.” 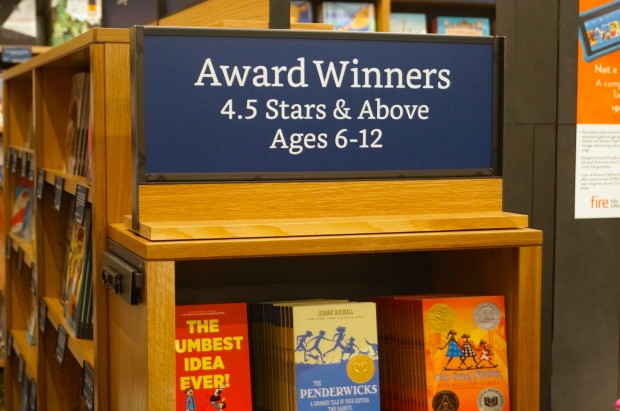 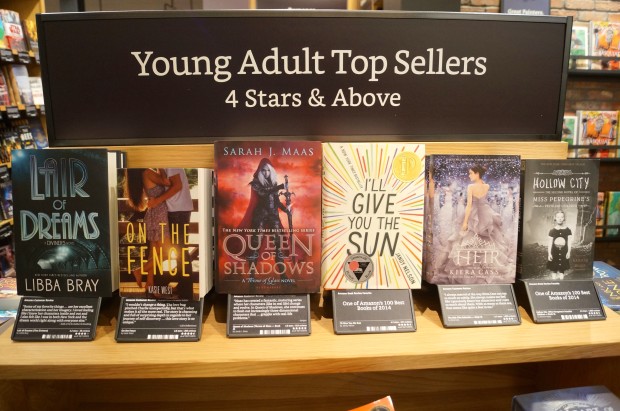 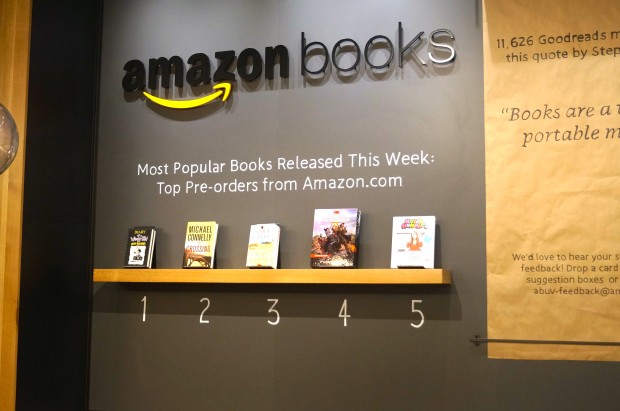 “This sounds kind of corny,” Cast admits, “but as I walk through the store, I hear the voice of our customers. I hear their reviews, hear others commenting on their reviews, saying this is a good one. We wanted to bring that into the store.”

But Mutter, the Shelf Awareness editor, cautioned that Amazon’s data-driven strategy for selling books could translate poorly in a physical store.

“It’ll be interesting to see how the book retailer that relies on algorithms and readers’ recommendations and cold sales metrics will do in a brick-and-mortar space, where customers are used to dealing with booksellers who love books and have a lot of personal knowledge of the kind that is opposite of Amazon’s corporate approach,” he noted. 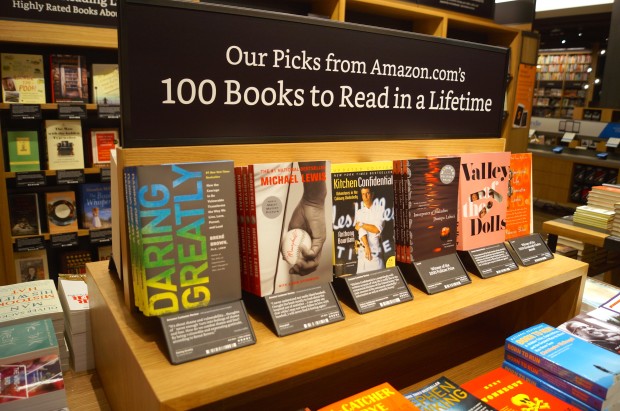 Another unique aspect of Amazon Books: There are no price tags. Customers can either scan the book at a kiosk or use Amazon’s app to find out how much each product is; prices are identical to those on Amazon.com. 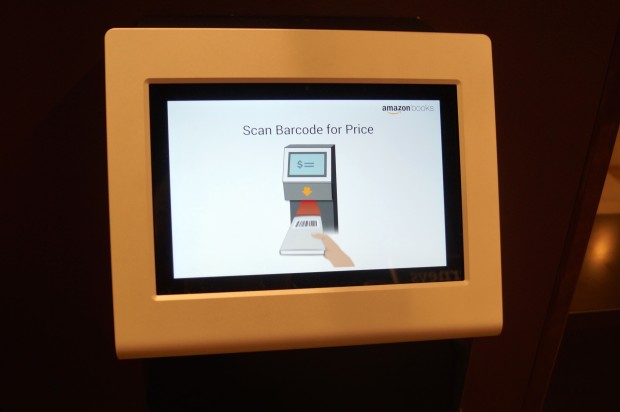 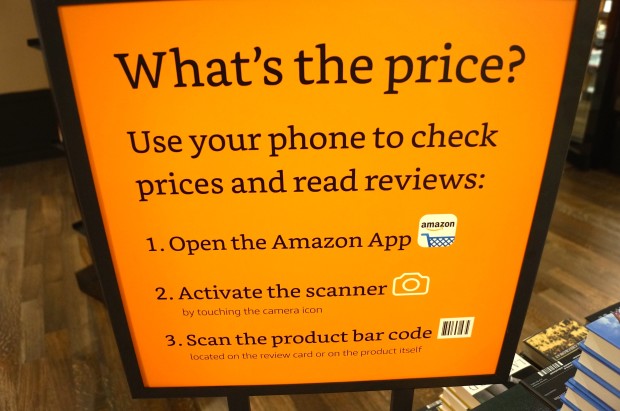 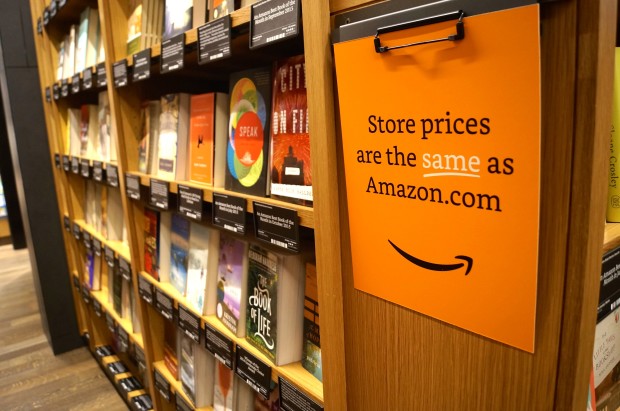 However, what you will find at each bookshelf is an Amazon Kindle Paperwhite, one of the company’s e-readers. This is a way for Amazon to show customers what it’s like to read books on its own electronic device. Each Kindle is loaded with physical titles you’ll find on the same bookshelf where the e-reader is located.

“Some people have never used one and don’t know how easy it is to change the font size, or to look up a word,” Cast noted. 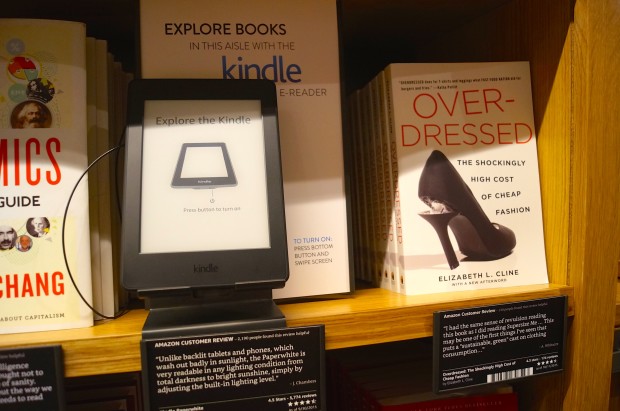 Speaking of the Kindle, Amazon’s other hardware products are featured directly in the center of the store, similar to what Apple or Microsoft do at their own physical retail locations. There is also an “Amazon Answers” desk to help customers with any product questions.

Other amenities include a small hangout space for customers to sit down and browse through magazines or e-books with a Fire tablet. In the children’s books area, there are beanbags and a table equipped with — yes, you guessed it, more Fire tablets — where kids can spend time with their parents. 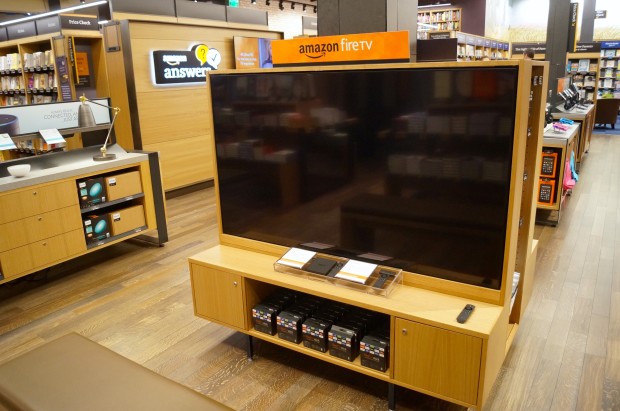 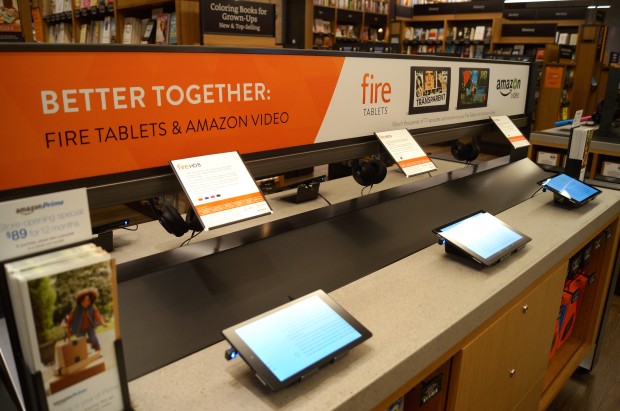 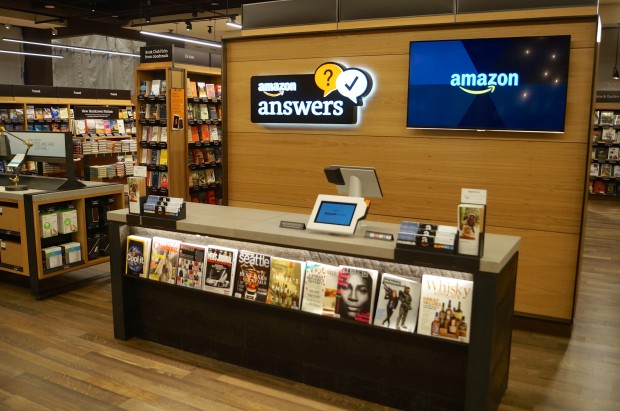 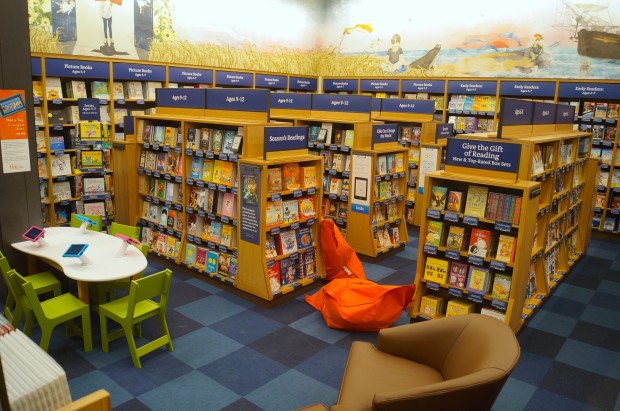 You’ll even find Amazon’s Echo, the company’s intelligent, talking home speaker/virtual assistant, located on a table that is somewhat symbolic of Amazon’s innovations in the book industry. 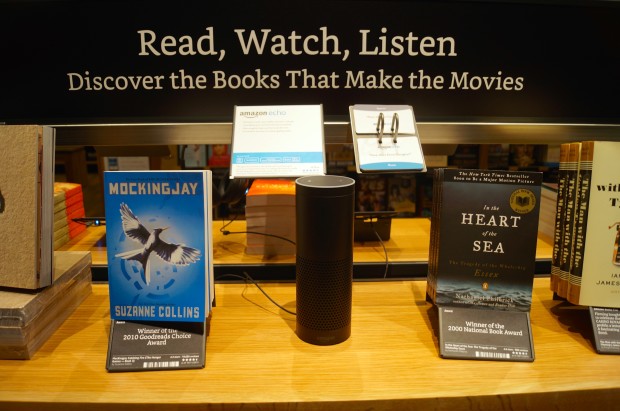 This particular table includes traditional printed books that have been made into movies. Alongside the paperbacks are Amazon Fire HD tablets that let customers watch movie trailers on IMDb, another Amazon-owned company. 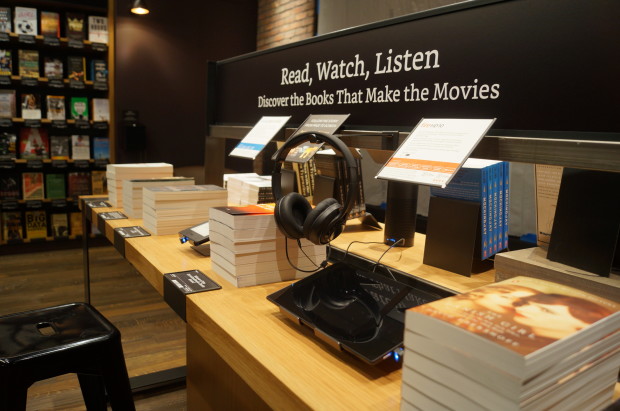 There are also headphones hooked to the tablets that let you listen to audiobooks from Amazon’s Audible app. And finally, you can talk to the Echo device and ask something like “Alexa, read Moby Dick” — seconds later, a robot starts reading Moby Dick.

The juxtaposition of Amazon’s new hardware with traditional books is fascinating, but also elicits questions about the very existence of the store itself. Is Amazon opening a physical store to sell more of its gadgets? Or is it trying to sell more books during a time when independent booksellers are actually thriving as of late?

How does Amazon measure success with Amazon Books?

“We’re a business, so our goal is to focus on customers, give them a great bookstore, let them test drive our devices, and to sell a lot of books and devices,” Cast noted. “We’ll measure success by how well we do that. We hope we can make it work.” 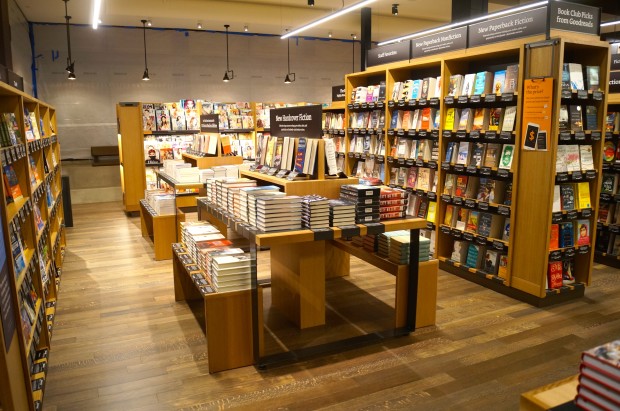 As for opening its first store in Seattle, Cast noted the city’s strong literary community and large population of book lovers, along with the close proximity to the company’s South Lake Union headquarters. Amazon has a history of testing out new projects first in its home region, from the Amazon Fresh grocery delivery service to the new Amazon Flex crowdsourced package delivery network.

In terms of the specific location, she said that the most popular request made by customers to the University Village general manager was to have a bookstore ever since Barnes & Noble closed there in 2011.

Cast added that there are no immediate plans to open other Amazon Books locations, but that could change.

“We hope that if this goes well, if customers love it, we’d love to do it in other places,” she said.

“We hope that if this goes well, if customers love it, we’d love to do it in other places.”

The store’s opening confirms earlier GeekWire reports about the location at University Village, an upscale shopping complex north of downtown Seattle where companies like Microsoft, Apple, and Verizon also have stores.

This project became a subject of intrigue last month when a report by Shelf Awareness identified the location as the possible site of Amazon’s first real retail store.