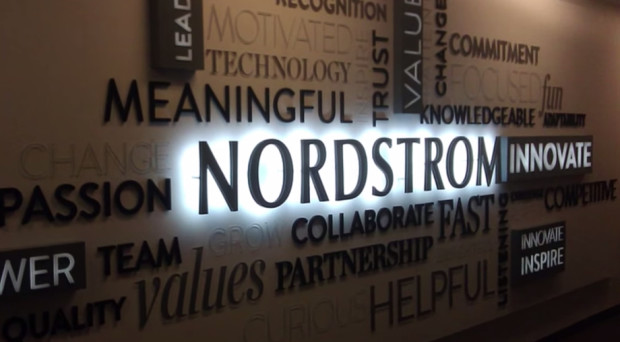 Company spokeswoman Tara Darrow confirmed with GeekWire this morning that the Seattle-based retailer recently rolled out a new “technology leadership structure” that resulted in a handful of folks losing their jobs. Here’s her full statement:

For the past six months, Nordstrom has been taking a closer look at our Technology team to ensure it is best structured to provide a competitive advantage for Nordstrom. Last week we shared our new Technology leadership structure with that team. Where some roles have been added and leaders were moved or promoted into them, others will no longer be needed to support the future direction of our organization. We had to make tough decisions that unfortunately resulted in 10 people no longer having jobs with Nordstrom. Those people were notified last week. We are continuing to work through additional details of the structure over the coming weeks.

The job cuts and restructuring of Nordstrom’s technology team follow what the company indicated during its most recent quarterly earnings call last month. While Nordstrom is seeing increased online sales — e-commerce now represents 20 percent of the retailer’s overall business, compared to eight percent five years ago — company managers said they plan to scale back technology projects during 2016.

Nordstrom plans to spend $300 million on tech and e-commerce this year, which about the same amount as the company spent last year. The difference is that the $300 million spent in 2015 represented a 35-percent increase from the prior year.

“This business model has a high variable cost structure driven by fulfillment and marketing costs in addition to ongoing technology investments,” said Nordstrom CFO Michael Koppel in a conference call with analysts. “With our increased investments to gain market share along with the changing business model, expenses in recent years have grown faster than sales.”

Koppel added that Nordstrom is focusing on “fewer, more meaningful projects, such as a scalable merchandising solution that supports seamless integration across multiple channels” and developing more efficient ways to deliver product and lower shipping costs.

Over the past few years, Nordstrom has been rolling out all sorts of e-commerce initiatives, including a new Android app, a text-to-buy feature, curbside pickup for online orders, a way to purchase items through Instagram, and a standalone website for Nordstrom Rack stores. It also acquired Trunk Club in 2014.

Nordstrom’s quarterly net income fell to $180 million for the most recent quarter, or nearly 30 percent below the same period a year ago. Its stock is down nearly 30 percent in the past year, now trading at about $52 per share.

The 115-year-old company operates 323 stores in 39 states and sells product online at Nordstrom.com, Nordstromrack.com, and HauteLook.com.