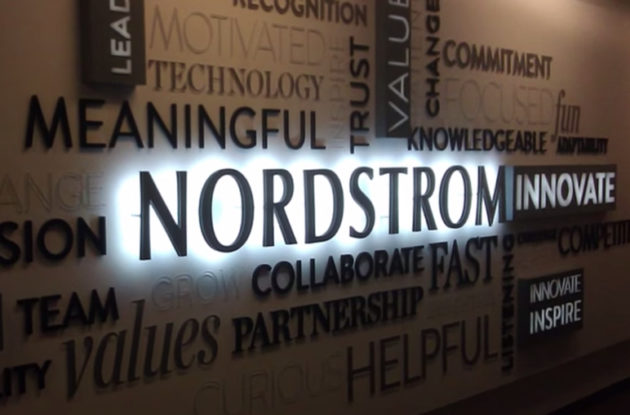 Not only was Nordstrom the second major retailer on Thursday to report disappointing earnings, but the 115-year-old company was also the second big retail chain to signal that its e-commerce investments may not be paying off as hoped.

On Thursday, Seattle-based Nordstrom reported quarterly net income fell to $180 million, or nearly 30 percent below the same period a year ago. Earlier on Thursday, Walmart, the nation’s largest retailer and one of the world’s biggest companies, reported profits in the fourth quarter dropped 8 percent.

In Nordstrom’s case at least, Wall Street appears to be punishing the stock. In pre-market trading on Friday, shares of Nordstrom were down 8 percent to $48.34.

Nordstrom says that it has seen increased online sales, with e-commerce now representing 20 percent of the retailer’s overall business, compared to eight percent five years ago.

But those increases don’t appear to be enough to justify more e-commerce investment. Nordstrom managers said they plan to scale back technology projects and spend $300 million on tech and e-commerce. That’s about the same amount as the company spent last year. The difference is the $300 million spent in 2015 represented a 35-percent increase from the prior year.

“This business model has a high variable cost structure driven by fulfillment and marketing costs in addition to ongoing technology investments,” said Nordstrom CFO Michael Koppel in a conference call with analysts. “With our increased investments to gain market share along with the changing business model, expenses in recent years have grown faster than sales.”

In technology, we are planning productivity improvements by focusing on fewer, more meaningful projects, such as a scalable merchandising solution that supports seamless integration across multiple channels. In addition, we are accelerating our efforts to re-platform our architecture to streamline development while reducing costs. In fulfillment, we are assessing ways to improve efficiencies around delivering product to customers which is expected to generate lower shipping costs. We are also refining our online assortments with a focus on unit profitability.

Walmart also spent big on technology in 2015. Despite that, the company’s e-commerce sales are slowing. The quarter saw an 8-percent increase in e-commerce revenue in the fourth quarter, down from 10 percent in the third, and 16 percent in the second.

The evidence is stacking up that big, traditional retailers are getting Amazon-ed.

Amazon reported fourth-quarter sales of $35.7 billion, a 22-percent year-over-year increase. Net earnings per share were $1.00, well below analyst expectations of $1.56.  While this missed badly, net income for the quarter was $482 million, which marked a 122-percent increase from the year-ago quarter. It was also the third consecutive profitable quarter for the company. Perhaps the biggest contrast between Amazon and Nordstrom was in their yearly forecasts.

Nordstrom warned that earnings per share for the first half of 2016 could fall as much as 30 percent. Amazon’s guidance was much rosier. The company predicted first-quarter revenue would come in between $26.5 billion and $29 billion. That’s an increase of between 17 percent and 28 percent from the first-quarter in 2015.

So, as Nordstrom and Walmart scratch their heads about e-commerce, Amazon invests in new technology and lines up new ways, including its own Uber-esque car service and cargo jets, to speed up delivery of goods to customers.

In pre-market trading on Friday, Amazon shares were priced at $523.