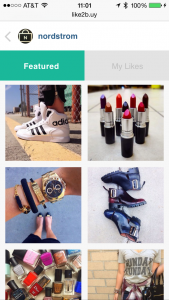 As a retail brand, Nordstrom holds a coveted position on Instagram.

It has more than 530,000 followers who scan new items that they can purchase from the company, alongside their friends’ selfies and food pictures.

In order to make money off those followers, the company has turned to a new platform called Like2Buy that’s designed to make an Instagram photo into a tappable advertisement. Bloomberg BusinessWeek calls Nordstrom’s Like2Buy a “sort of fake Instagram,” dubbing it a “shadow site” of the popular social network.

Each photo posted by Nordstrom comes with a link to the company’s Like2Buy page, which shows an Instagram-esque gallery of photos to users. Someone who taps on a photo will then get redirected to a page on Nordstrom’s website where they can buy the product in question.

Users can also connect their Instagram account to MyLikes, and get a grid of all the photos they liked in order to then tap and purchase them in the future. It’s a way to make Instagram a bit more like Pinterest, which allows users to collect their favorite products (and other images) which then puts them in an easy-to-access place for purchasing.

Nordstrom is the first company to use the new platform, though Curalate, the company behind Like2Buy, is open to working with other retailers to draw in their Instagram followers.

Target also is working with Curalate, looking to monetize its Instagram feeds, according to CNBC.

It’s a part of Nordstrom’s ongoing efforts to use digital products in order to boost its sales. The company teamed up with online jewelry retailer Blue Nile to run “click-and-brick” kiosks in certain stores that allow shoppers to get their hands on Blue Nile rings in person before purchasing them.