Amazon’s Daily Dish, exclusive to Prime members, is being tested just in Seattle for now, available at a limited number of companies, as an outgrowth of the Amazon Restaurants delivery service. But the reach of the Prime Now app across the country gives Amazon a powerful platform for potential future expansion.

“Prime members are loving the service so far and we are excited to continue expanding the service,” an Amazon spokesperson said in response to GeekWire’s inquiry about Daily Dish.

After receiving a text message at 9:30 a.m., Daily Dish customers can pick from a handful of rotating dishes prepared by local restaurants. After ordering before 11 a.m. via the Prime Now app, lunch arrives at their office building from noon to 12:30 p.m. 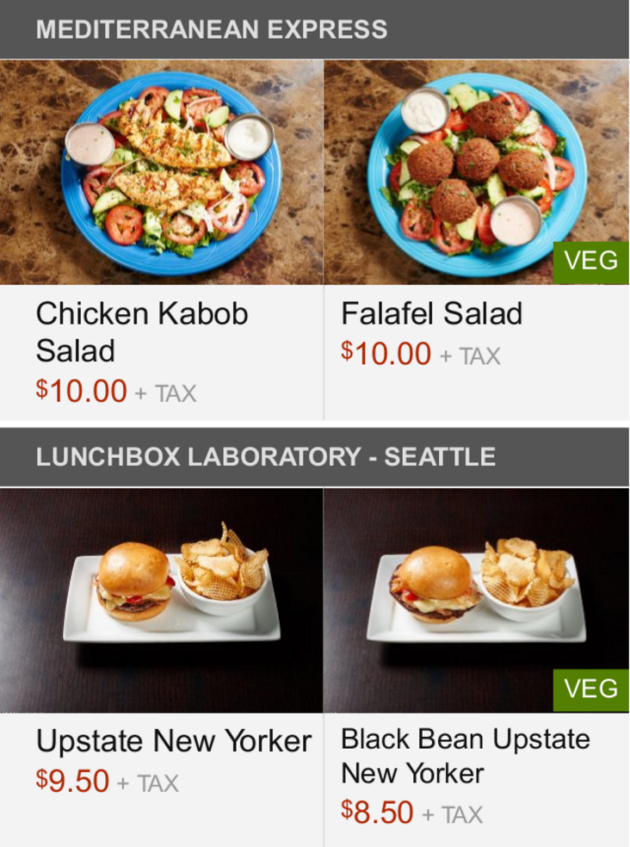 The Upstate New Yorker is listed at $9.50 plus tax on Daily Dish; the Lunchbox Laboratory menu lists it for $11.50. The Chicken Kabob Salad sells for $10 on Amazon; Mediterranean Kitchen lists it for $10.99 on its menu.

Amazon already delivers meals within one hour to Prime members via the Amazon Restaurants service, which first launched in Seattle this past December and has since expanded to other cities.

Many of those restaurants also work with Peach, although Amazon’s price per dish is about $1 less in some cases. Nishant Singh, the Peach CEO, hasn’t yet responded to messages seeking comment. Update: Singh hasn’t responded, but it’s clear that some Peach employees aren’t too thrilled with Amazon’s new service.

“When the 6th largest company in America directly rips off your 40 person startup’s product…,” wrote Vijay Boyapati, a senior engineer at Peach, in a Facebook post.

Amazon has dabbled in food delivery ever since launching grocery delivery service AmazonFresh in Seattle nine years ago. The company launched a takeout service in 2014 that let customers use the now-defunct Amazon Local app to order food for pick-up. Amazon then began allowing customers to order food via Amazon Local directly from restaurants, who delivered the meals.

This past September, Amazon rolled out the Amazon Restaurants service via Prime Now, using its own drivers to deliver meals in one hour or less. That service quickly expanded to other cities.

Seattle-based Peach has raised almost $11 million since its founding in 2014 and also delivers in San Diego and Boston. Peach sends text messages each day to members, who then have 90 minutes to place an order by responding with a “yes” text. Meals show up an hour later at one of hundreds of pre-loaded office spaces on the system.

Amazon’s Daily Dish follows a similar approach. In fact, the “how it works” instructions on the Daily Dish webpage are very similar to what Peach has on its website. Here’s what Amazon shows:

And here’s what Peach shows:

Looks like we came in 2nd place .. BUT we beat out Amazon and Starbucks! @Peach Runner up prize? #PeachMadness pic.twitter.com/1qMNTgenXQ

In Seattle, tech companies like Microsoft, Zillow, Expedia, Tableau, and several others all have their offices as pickup locations on Peach’s platform.

Peach delivers to more than 300 office buildings in Seattle. The company said it had 25 employees this past August; a LinkedIn search shows nearly double that many people working at the company today. Investors in Peach include Madrona Venture Group, Maveron, and Vulcan Capital.

Peach, one of the “Seattle 10” startups from 2015, expanded its services last year to include catering for Facebook’s Seattle office, Porch, and other customers. “Peach Perks” is another new offering that lets companies subsidize lunch for their employees. Many tech companies have their own in-house chefs to cook food for workers, and Peach allows startups without a kitchen or cooking staff provide a similar perk.

Both Peach and Amazon compete against a flurry of other food delivery companies like Caviar, Postmates, Bitesquad, Uber (UberEATS), Seamless, GrubHub, Yelp-owned Eat 24, and many others.