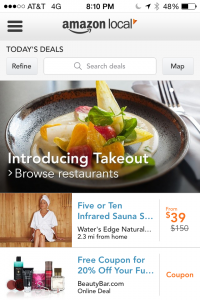 Amazon.com is certainly no stranger to the food market, having delivered groceries to the doors of customers in Seattle — and more recently California — for the past several years via Amazon Fresh.

Now the Seattle giant is taking it one step further with a new food takeout service powered by its Amazon Local mobile app.

Unlike many of the new food delivery services that have been popping up all over the place, Amazon’s takeout program does not deliver food to your door and instead is a simple way to purchase food for pick-up using the Amazon Local app.

It’s not exactly a groundbreaking service, as many likely have no problem simply looking at a menu online and calling in an order. But for those that may not be familiar with dishes at a restaurant, or who prefer to pay online with a credit card, Amazon Local might be a nice option.

We just tried out the new takeout service in Seattle, where Amazon is testing the feature on its iOS Local app, and here’s how it works in a nutshell:

1. Pick dishes from any of 46 restaurants on Amazon Local’s app.

3. Amazon sends an email to you with a pickup time.

4. You pick up food at the restaurant.

Here’s a more detailed report from our experience today:

1. On the Amazon Local app homepage, a big picture with “Introducing Takeout” showed up. There was also a “Restaurant Takeout” button under a “Restaurants” tab on the left-hand drop-down menu.

After clicking on that, we were presented a list of 46 restaurants sorted by closest distance, 22 of which were open (you can’t order from places that are closed). There were several high-end eateries to pick from — El Gaucho, Salty’s, Metropolitan Grill, to name a few — in addition to a few more affordable options. Each restaurant page had descriptions, photos, maps, and of course, full menus. All the open places had an estimated takeout time of 30 minutes.

2. Eventually we decided on The Boar’s Nest, a highly-rated BBQ joint a short drive from our Fremont offices. I picked out four items — two sandwiches, a salad, and some fried pickles — and my total ended up being $31.14 with tax and a 15 percent tip. The food prices listed on Amazon’s app were identical to what I saw on the Boar’s Nest website. 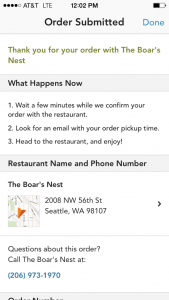 3. I had yet to log into my Amazon account, and when I wanted to pay, the app asked for my log-in credentials. After entering that and selecting a credit card, I typed in a pickup name and my mobile phone number.

4. Once confirming the purchase at 12:03 p.m., Amazon asked me to “wait a few minutes while we confirm your order with the restaurant.”

Eight minutes later, I received another email notifying me that the order would be ready at The Boar’s Nest at 12:41 p.m. If I had questions, Amazon directed me to the restaurant’s phone number. If I needed directions, Amazon offered a Bing Maps link.

5. While I drove over to The Boar’s Nest, I thought about how nice it would be if Amazon instead delivered the food to our office instead. Turns out that this was possible with Postmates, a company we reviewed last week that delivers food from The Boar’s Nest.

I arrived at the eatery around 12:45 p.m. and my food was ready. The cook told me that his restaurant had only received a few orders from Amazon Local’s app in the past two months, and how Amazon takes a cut from each order.

But he did note that he’s been happy with the business from Amazon Fresh. The Boar’s Nest offers an array of items on Amazon’s online grocery platform and prepares dishes cold that customers heat up in their homes.

6. I came back to the office with our food. My fried chicken sandwich was decent, but the tasty sauces I applied helped increase my happiness level. My colleagues were also satisfied with their food.

Final thoughts: When I first heard of this new service, I thought Amazon was delivering food. Instead, they are simply offering a way to order takeout food through its Amazon Local app.

My experience ordering the grub was relatively easy, so props to Amazon for that. But the next time I want lunch or dinner from one of Seattle’s top spots, I’d rather just use one of the new delivery services we just reviewed.

It will be interesting to see how Amazon rolls out this new program — both to other locations, and to other eateries. It faces tough competition in the delivery/takeout space, but this new play certainly fits into Amazon’s other attempts to serve the local market.

And maybe when and if the FAA approves Amazon’s delivery drones, they’ll fly food to your doorstep, too.