At San Diego Comic-Con, Microsoft released the first trailer for “Atari: Game Over,” a documentary about the rise and fall of Atari, and the renowned gaming company’s utter failure to make a commercial success out of its game version of “E.T.” It’s the first episode in “Signal to Noise,” a series of documentaries for its Xbox game consoles. 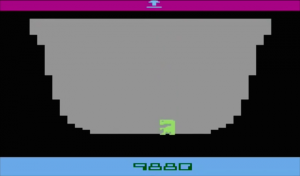 The film centers on the people involved in the creation of “E.T.,” and includes footage from the excavation of a dump earlier this year in Alamogordo, New Mexico that contained a cache of old Atari games and hardware. The producers interviewed a number of Atari employees, including Howard Warshaw, who was tasked with making “E.T.” in only five weeks.

The documentary was produced through a partnership with Xbox Entertainment Studios and Lightbox, a company made by two-time Academy Award-winning producer Simon Chinn and Emmy-winning producer Jonathan Chinn. It was directed by Zak Penn, who’s best known for penning the screenplay for “Behind Enemy Lines” and “The Incredible Hulk.”

The launch of “Game Over” marks the beginning of the end for Microsoft’s push to create original video content for its video game system. As a part of Microsoft’s massive round of layoffs, the company is shutting down the Xbox Entertainment Studios, though it still plans to release some of the content that’s already in production, including more of “Signal to Noise.”