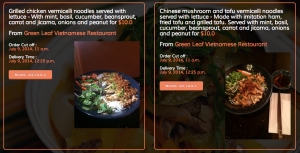 A new startup in Seattle just raised $2.75 million from some of the region’s top venture capital firms to do something rather simple: Deliver lunch.

Peachd is one of many food delivery companies sprouting up around the nation and Seattle, but it hopes to differentiate itself with a service that brings daytime grub from top local restaurants to offices around the city — all without delivery fees.

Here’s how it works. Between 10 a.m. and 10:30 a.m., Peachd sends a text message to members with a link for that day’s selected dish, which costs an average of $10. Customers have an hour to place an order by responding with a “yes” text, and their food will show up an hour later at a pre-determined office space.

The startup, which is active in Seattle and Washington D.C., picks a new dish each day and has several offices — from Amazon to Microsoft to Porch — where it delivers the food:

“I like to taste different food, but I have only limited time to taste everything that Seattle restaurants has to offer,” Singh said. “So I launched Peachd with the vision of delivering quality food to people without delivery charges.”

The seed round was led by Maveron and had participation from Madrona Venture Group and Vulcan Inc. Peachd will use the money to hire employees — it currently employs five — and reach more markets.

Peachd, which shares revenue with partnering restaurants, faces stiff delivery competition in the Seattle market with existing food delivery services like Caviar, Eat24, Bitesquad, Postmates and Bay Area-based Munchery, which is launching in Seattle this summer. Amazon is also in the space with its Amazon Fresh Seattle Spotlight program, and the company is quietly rolling out a takeout service.

“There are lot of companies focusing on delivering food, but we are only focusing on lunch and getting food delivered to someone’s workplace without charging delivery fees,” he said.

Here’s a video of Singh pitching Peachd back in January: