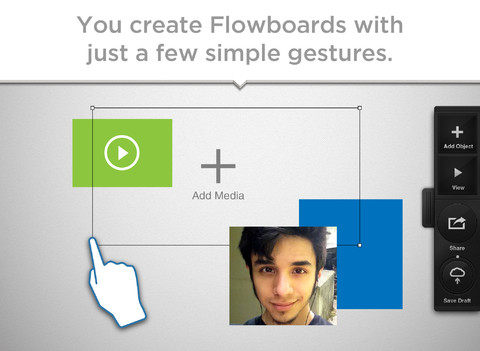 Flowboard, which lets anyone create touch-enabled stories on the iPad, released version 2.0 of its app and has added editable transitions, printing, save-as-PDF capabilities and new premium templates.

The startup, which launched this past April, also announced a $750,000 round with participation from several angels. Vijay Vashee, a Flowboard investor and former general manager of Microsoft PowerPoint, is now the company’s strategic advisor.

Flowboard now has 150,000 registered users, many of which have come from students and teachers from more than 4,000 schools and universities. CEO Brent Brookler said he’s been happy with the growth of Flowboard, but added that the company is still in its early stages.

“When we sought out to build Flowboard, we knew if we focused on building the best presentation software for the iPad that was simple and intuitive, we would get traction and we have been witnessing that since launch,” he said. “Now, we are taking our learnings from our iPad app and the feedback from our users and building out new features, and new products for new platforms.”

Flowboard, which offers its app for free but also sells a premium version for $5 per month, has raised $1 million to date. It competes with a few other similar Seattle-based presentation app startups, including Haiku Deck and Slide Bureau.