Things are rolling at Haiku Deck in the form of a new iPhone app and an impressive milestone.

The Seattle-based presentation app maker just crossed the one million download mark, a notable achievement given the company’s series of pivots over the past four years. 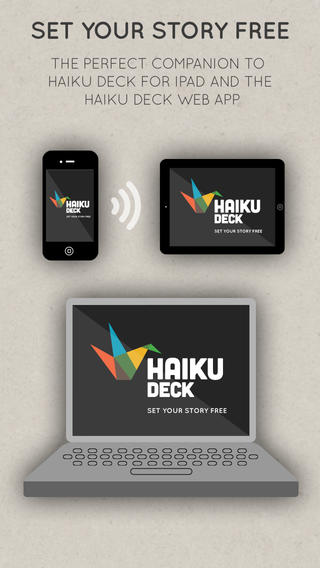 The TechStars Seattle grad, led by former Cranium executive Adam Tratt, originally started making celebrity-based social games under the moniker Giant Thinkwell. But it ditched those efforts after the games failed to gain traction, settling instead on a new type of presentation software for the iPad.

That decision turned out to be a good one, as Haiku Deck has proven popular since debuting in the fall of 2012. The startup, which won the 2013 GeekWire Awards App of the Year, made its product available on desktop and inked a deal with Getty Images last year after reeling in a $3 million investment round.

Today marks the debut of the company’s iPhone app, which can be used as a remote control for Haiku Deck presentations made on the iPad. Users can also stream presentations to a connected display straight from the app and will soon be able to create their own projects on the iPhone itself.

Forty percent of traffic from Haiku Deck visitors was coming from iPhones, so releasing an app for the smartphone made sense.

“Up to now, presentation decks would open in a browser, and we wanted to make that experience even better for people consuming decks, sharing them, and for the authors who make them,” Tratt explained.

But they’ve clearly struck a chord and found a need for a presentation tool like Haiku Deck.

“A lot of what we did in the early days were solutions looking for a problem,” Tratt said. “With Haiku Deck, it’s gratifying to wake up every day and help people be more effective at pitching their idea, teaching a lesson, or closing a deal.”

The secret sauce for Haiku Deck, Tratt said, has been the belief that sharing an idea, pitching a business, or telling a story is the “greatest thing humans get to do.”

“We want to make people 10 times more effective in one-tenth the amount of time,” he said. “This core belief keeps us focused and drives our entire team every day.”

Haiku Deck is happy with the one million download achievement, but Tratt said the company now has its eye on 10 million users with plans to build on new platforms, sign more partnership deals and continue innovating the product.

“30 million presentations are created every day,” Tratt said. “So yes, we feel like we’re just at the start of something huge.”