Phew. Now that was fun.

We just got off the stage at the 2013 GeekWire Awards at the EMP in Seattle, naming winners in 14 geeky categories representing the pillars of the region’s startup community. Winners walked away with custom-made joystick trophies to show off on their mantles, recognizing their climb up the startup charts. Check out Twitter to see some reaction from our awesome attendees.

Stay tuned for more coverage from the event, but without further ado, here’s a rundown of the winners in each category. Thanks to our intern Alisa Reznick for snapping these photos.

Startup Deal of the Year, presented by UK Trade & Investment 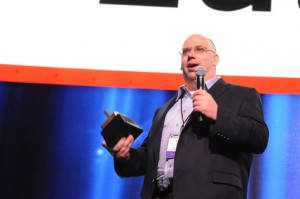 The fast-growing daily deal site for kid’s apparel, toys and more raised $85 million from Andreessen Horowitz and others last fall at a whopping $1 billion valuation. Zulily already has more than 10 million members using the service, and it’s expanding its operations in Seattle with plans to take over portions of the RealNetworks building.

Other finalists were Appature, Madrona, Qumulo and Smartsheet. See this post for more background on this category.

App of the Year, presented by Fresh Consulting 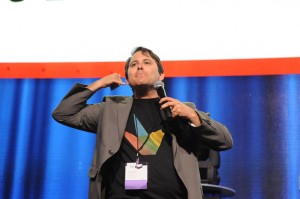 This app makes it easy to create and share presentations using Apple’s iPad.

Haiku Deck, from a group of Seattle startup mainstays, demonstrates the growing power and unique capabilities of tablets for everyday productivity. Released last fall to strong reviews, the app was spotlighted by Apple and quickly rose up the charts of top-selling iPad apps. Not resting on their laurels, the Haiku Deck team released a significant update in March, including the ability to add charts, graphs and bulleted or numbered lists of up to five items, plus image editing.

Other finalists were Glympse, Walk Score, Zillow Digs and Dwellable. See this post for more background on this category.

Perk of the Year, presented by Kibble & Prentice 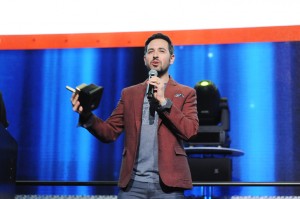 The SEO titan gives employees a $3,000 stipend that can only be spent on vacation, and that was perky enough to win this new GeekWire Awards category.

Other finalists were Buuteeq, DoubleDown Interactive, Groundspeak and HasOffers. See this post for more background on this category.

Do-Gooder of the Year, presented by Seattle Children’s Research Institute 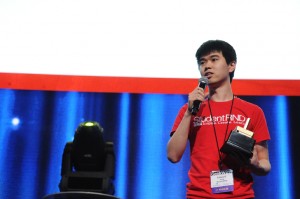 Edward Jiang hasn’t yet made it through the University of Washington, but he’s still stirring up the entrepreneurial community in a big way. The 21-year-old Jiang is the co-founder of StudentRND, a non-profit organization which hosts weekend hackathons and tech incubator programs for entrepreneurial high school and college kids.

As we noted last week in our voting for “Young Entrepreneur of the Year,” some of the biggest ideas in technology have been created by people under the age of 30. Jiang, along with his colleagues at StudentRND, are making sure the Seattle area has a stable crop of those up-and-comers. Jiang’s mission is pretty simple: “What we wanted to build was a community of kids who loved to build cool stuff.” 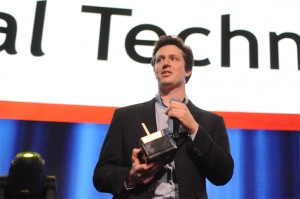 Sam Blackman’s Elemental Technologies has already drawn comparisons to Isilon, the Seattle-based storage company that sold to EMC for $2.25 billion. In fact, Isilon co-founder Sujal Patel joined the board of the Portland startup last year, shortly after Blackman reeled in $13 million in venture capital (even though he didn’t need the money). Blackman previously worked at Pixelworks, Silicon Graphics and Intel. Elemental’s services are now powering offerings such as HBO GO and Comcast Xfinity.

See this post for more background on this category.

Game of the Year, presented by Filter

Winner: Halo 4 (Award accepted by Chris Lee, the director of production for Halo 4) 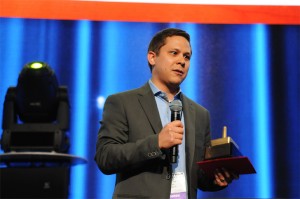 Microsoft proved that Halo has a life beyond Bungie last fall with the release of Halo 4.

It was the first game in the blockbuster franchise to be developed by Microsoft’s own 343 Industries, which took over from the original Halo developer after Bungie spun off from the Redmond company. And the new Halo for Xbox 360 debuted to a big audience, setting a record of $220 million in sales on its first day alone.

Other finalists were Counter-Strike: Global Offensive; DoubleDown Casino; Hawken; and Match-Up.. More background on this category in this earlier post.

Bootstrapper of the Year, presented by HasOffers 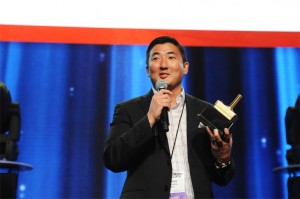 The developer of the daily deal site for weddings isn’t married to the idea of bootstrapping long-term, but CEO Matthew Matsudaira said it did help the startup get off the ground. “It allowed us to be agile and move quickly to deliver an (minimum viable product) to the marketplace,” he says. Adorii is trying to make weddings more affordable, offering discounts of as much as 80 percent on selected goods and services.

Innovation of the Year, presented by Intellectual Ventures 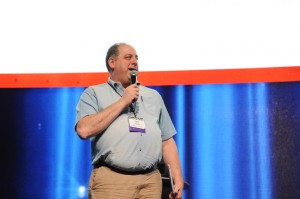 Handwriting recognition on iOS? Yep, Redmond-based startup Puzzazz released its TouchWrite technology for iPhone and iPad as part of its digital puzzle bookstore for the Apple platform last fall.

TouchWrite lets users draw a character across the top of the screen, then recognizes the letter and places a digital version in the active cell of the puzzle. It can work with a variety of handwriting styles and doesn’t require users to learn any special style of writing. The feature turns on automatically when the on-screen keyboard is turned off.

It’s a unique feature of the Puzzazz puzzle books, and for now, founder Roy Leban says Puzzazz doesn’t have plans to license it to others.

The Redmond company prevailed in this category over a field of innovations that included Chirpify, Hointer, Innovega and Planetary Resources.

See this earlier post for more background on this category. 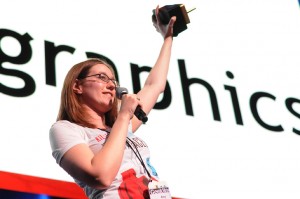 This video from the Killer Infographics HQ speaks for itself, yo. (But you can also check out this post for more details on the space.)

Other finalists in this category were 47 Degrees, Appature, Globys and Simply Measured. More background here.

Hire of the Year, presented by Summit Group Solutions 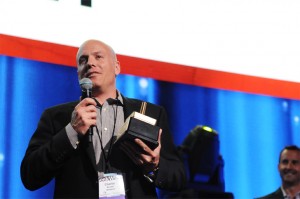 We’re still not sure what secretive project that Charlie Kindel was hired to work on at Amazon.com. But the former Microsoft Windows Phone general manager will certainly be one to watch at the online retailer. Kindel left Microsoft in 2011 to create his own startup, BizLogr. And then on April 1st of this year he announced his new gig at Amazon in a blog post. “Amazon presented an opportunity to build something new that has ginormous potential. I simply couldn’t pass the opportunity up,” he wrote. 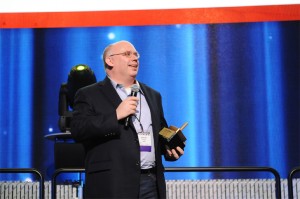 While daily deal sites such as Groupon and LivingSocial have faltered, Zulily has continued to grow its e-commerce business with a laser focus on providing unique products to busy moms. With more than 600 employees, Zulily raised $85 million at a $1 billion valuation last year from Silicon Valley power broker Andreessen Horowitz. At the time of funding, it had more than 10 million members. It’s now eyeing an expansion in Seattle, looking to take over a large chunk of the RealNetworks buildingon Elliott Avenue. Founded by former Blue Nile execs Mark Vadon and Darrell Cavens, the office move would mark its fifth in four years.

Other finalists in this category were Apptio, INRIX, SEOmoz and Urban Airship. More background in this post.

Geek of the Year, presented by Barokas PR 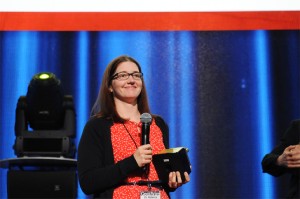 A GeekWire Awards first: A tie!

Two winners here and they are both equally excellent. Etzioni, a University of Washington computer scientist and serial entrepreneur, has a knack for building businesses based on complex algorithms that help people make decisions — from Farecast (now part of Microsoft Bing Travel) to Decide, the consumer price prediction and consumer review startup. 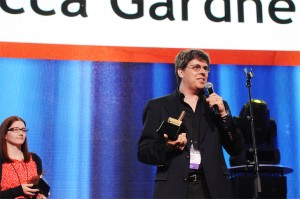 The director of the University of Washington’s Turing Center, Etzioni has remained at the forefront of research shaping the future of search. See his past Geek of the Week profile.

Gardner, a cancer researcher, and her colleagues at Seattle Children’s Research Institute are altering the body’s infection-fighting blood cells to attack cancer in the same way those cells fight viruses. Gardner is the researcher leading a new clinical trial for young adults with relapsed acute lymphoblastic leukemia, or ALL, who are considered to have less than 20 percent chance of survival. See her past Geek of the Week profile.

Other finalists for Geek of the Year were Adam Loving, Kate Matsudaira and Ramez Naam. More background in this post.

Young Entrepreneur of the Year, presented by Appature 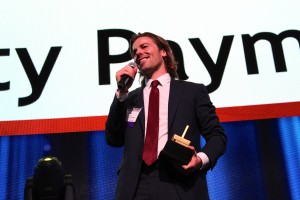 Price started Gravity Payments at the age of 19 during his freshman year at Seattle Pacific University. Now, at 28, he’s a well-established old-timer in entrepreneurial circles, but still young enough to qualify for this award. Gravity Payments employs nearly 100 people, and it was bootstrapped from the early days. The company provides payment processing services to small businesses, like restaurants, retailers and coffee shops. 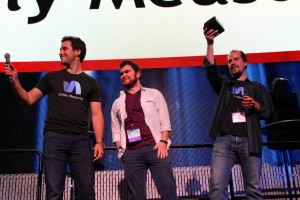 There’s no shortage of online tools to help manage social media activities. But Simply Measured is gaining traction with some big names. Customers using its analytics tools include American Express, AOL, Billboard, Edelman, Microsoft, Samsung and UFC, with customers paying between $1,500 and $2,500 per month to analyze social media traffic and determine social medial influencers. The Seattle company, led by Aviel Ginzburg, Damon Cortesi and Adam Schoenfeld, received a big boost in January when it raised $8 million from Bessemer Venture Partners and MHS Capital.

Congratulations to all the winners, and thanks to the hundreds of you who joined us at the EMP this evening for this one-of-a-kind awards event and party. Stay tuned for more coverage from the scene on GeekWire.

Photos taken by Alisa Reznick, a University of Washington student working as an editorial intern at GeekWire this quarter. Reach her at alisa@geekwire.com or on Twitter @AlisaReznick.