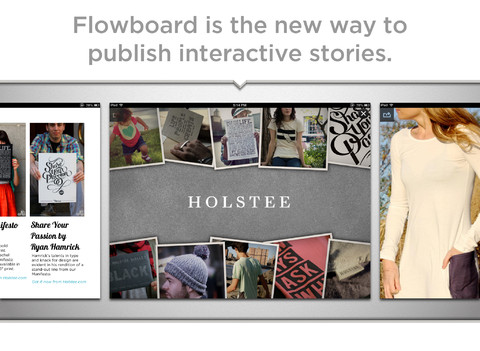 When Brent Brookler founded Treemo Labs seven years ago, the vision was to allow users to share content on the web and mobile phones as a product, direct to consumers. Then, the company began building apps for big brands like 60 Minutes and CNET.

“Flowboard is leveraging all that we have learned,” Brookler said. “It’s our product, our vision and we own it 100 percent.”

The Seattle-based company is rebranding itself first and foremost as “Flowboard,” rather than Treemo Labs. Brookler says that the company will continue to maintain Treemo Labs and its existing clients, but will be representing themselves as Flowboard first.

So what is Flowboard?

At its core, the iPad-only app lets anyone create touch-enabled stories, whether it’s for business, school, or something simpler like sharing travel photos or cooking recipes. 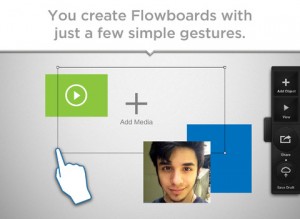 “We are defining a new kind of publication or presentation or ‘app experience’ that is specifically tailored for mobile and touch screens,” Brookler said. “We are truly mobile-first and helping to define ‘touch publishing’ where users can create and publish all with touch and gestures, and not mouse and keyboards.”

It may remind you of another presentation-app company in the area called Haiku Deck, a Seattle startup that just reeled in $3 million in fresh funding.

“Haiku Deck doesn’t handle slideshows or real interactivity,” Brookler said. “They’re good at what they do, which is simple, good-looking presentations. Ours is a little deeper.”

Flowboard is free, but the premium version that runs at $5/month offers more monthly upload quota and larger file size limits. All templates are free, but Flowboard plans on adding premium ones in the future.

“There are several other ways we can monetize the service down the road, and we’ll be announcing those plans as soon as they are finalized,” said Brookler, an entrepreneur who previously served as president of games and entertainment at Mobliss.

Flowboard, which has its office in Pioneer Square, currently employs 12 and just raised over $600,000 in bridge funding. The company plans to release its app on Android soon.

“We have big aspirations, and will continue to innovate and help change the way people communicate their ideas, their stories, and their visions through our tools,” Brookler said. “Our team is passionate about this product and are focused on bringing more and more innovation to market.”

Last year, the company released a publishing tool by the name of Appafolio that helps people create apps on their own with little to no coding skill.