We just got off the stage at the fourth annual Seattle 2.0 Startup Awards at the EMP in Seattle, naming winners in 14 categories representing the pillars of the region’s startup community. Winners walked away with custom-made framed records to hang on their walls — recognizing their climb up the startup charts.

Stay tuned for more coverage from the event, but without further ado, here’s a rundown of the winners in each category.

Investor of the Year, presented by Cooley 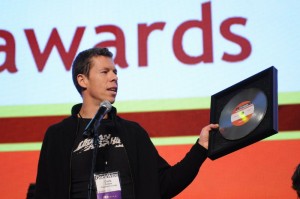 The co-creator of Founder’s Co-op is attempting to reimagine angel investing in the Northwest. And with a portfolio that includes more than two dozen startups he’s off to a good start. DeVore and his partner Andy Sack received a big vote of confidence earlier this year when the firm announced a new $8 million fund, money they will use to bankroll about 20 new companies.

Other finalists were Geoff Entress, Andy Liu, Bill Bryant and Hadi Partovi. See this post for more background on this category.

Schmoozer of the Year, presented by Barokas PR 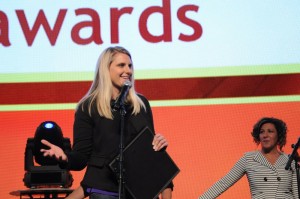 A fixture at Seattle technology events and the current president of Social Media Club Seattle, Causey was recently named vice president of marketing at Decide.com and honored on our 2012 Calendar for Geeks who Give Back.

Other finalists were Bob Crimmins, Geir Hansen, Adam Philipp and Todd Hooper. See this post for more background on this category.

The South Lake Union location of Uptown Espresso won high marks in the voting for this category, edging out Zeitgeist in Pioneer Square as the tech community’s favorite coffee shop this year.

Other finalists were Zoka, Cherry Street Coffee and the Madison Park Starbucks. See this post for more background on this category.

Startup CEO of the Year, presented by PayScale

The Cheezburger chief edged out Rand Fishkin of SEOmoz in the public voting to claim this coveted title.

Huh leads a network of more than 60 company-operated comedy sites and 20,000 user sites with monthly visitors of more than 22.5 million. He was one of the leaders of the fight against the Stop Online Piracy Act and Protect IP Act on the national level. And in his spare time, he’s working on a reality TV show with Bravo, and launching a new online journalism startup, Circa.

Other finalists were Keith Smith of BigDoor, Bryan Mistele of INRIX and Glenn Kelman of Redfin. See this post for more background on this category.

Deal of the Year, presented by Wilson Sonsini Goodrich Rosati

The maker of Bejeweled and Plants vs. Zombies sold to Electronic Arts for as much as $1.3 billion last summer, marking a huge return for founders John Vechey, Brian Fiete and Jason Kapalka who started company in Seattle in 2000.

PopCap ran away with the voting in this category, which also included finalists Swype, Apptio, Double Down Interactive and Zillow.

See this post for more background on this category.

Geek of the Year, presented by Filter 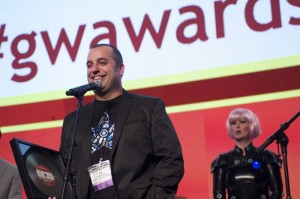 The longtime Emerald City Comicon director (and past GeekWire Geek of the Week) is one-half of the Kirby Krackle nerd rock band, owner of the ComicStop comic-book store chain, and author of a best-selling graphic novel.

His victory in this category — edging out Oren Etzioni of the University of Washington and startup Decide — follows the record attendance posted during the 10th anniversary of Emerald City Comicon a month ago.

Other finalists were Nathan Myhrvold, Yoky Matsuoka and Buster Benson. More background on this category in this earlier post.

Hire of the Year, presented by Protingent 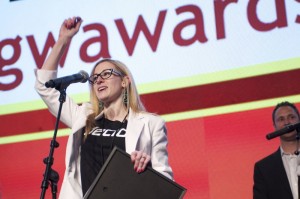 The University of Washington computer science grad prevailed in the voting over a strong field of finalists — Daryn Nakhuda of Amazon, Dan Shapiro of Google, Wibe Wagemans of Big Fish Games and Mitch Hill of Opscode.

Innovation of the Year, presented by Knoll

Microsoft this year expanded Kinect from its Xbox game console to Windows PCs, and it’s working closely with startups to help boost the library of Windows apps that work with the sensor, allowing for motion controls on a computer.

The Redmond company prevailed in this category over a field of innovations that included the Vioguard (self-santizing keyboard) LaserMotive (transmitting power with lasers) Symform (cloud storage network) and ExtraHop (application inspection triggers).

See this earlier post for more background on this category.

Bootstrapper of the Year, presented by Fresh Consulting 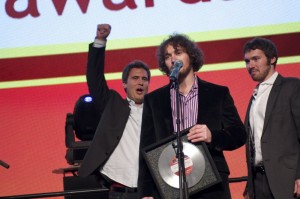 Twin brothers Lucas and Lee Brown invested $2 million into the online affiliate marketing company, and a little over a year after doing so they were cash flow positive. “Using our own money to build HasOffers forced (us) to concentrate on sustainability,” said Lucas Brown in an interview with GeekWire last year.

Has Offers prevailed in the voting in a tight competition with food review app Chewsy for the Boostrapper crown.

Other finalists in this category were Green Cupboards, Dwellable, and BigOven. More background here.

Mobile App of the Year, presented by AT&T Developer Program

Fans of this game from Seattle’s Z2Live showed up in force to propel the app to a strong victory as App of the Year.

Battle Nations is a combat strategy game that lets gamers command troops and compete with other gamers around the world — a prime example of the booming field of mobile and social games. A follow-up to Z2Live’s first big game, TradeNations, BattleNations is available as a free app for iPhone and iPod touch, with options to purchase in-app add-ons.

Other finalists in this category were Glympse (location sharing), PaperKarma (junk-mail avoidance), Swype (mobile input) and One Bus Away (transit). More background here.

Do-Gooder of the Year, presented by Splunk 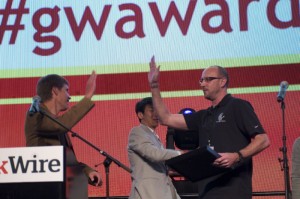 This nonprofit, founded by a Microsoft Windows Azure general manager, uses basketball and other team sports to teach homeless and imprisoned kids in the Philippines about teamwork, friendship, commitment, trust and other values to improve their lives.

This startup’s business intelligence products help companies more effectively analyze data through graphics, and it has been growing at a rapid pace, not only adding employees but also growing sales, which doubled to $72 million in 2011. CEO Christian Chabot has made no secret of the fact that he ultimately wants to take Tableau public.

Other finalists for Next Tech Titan were INRIX, Opscode, Redfin and Zulily. More background in this post.

Startup of the Year, presented by Washington Partners 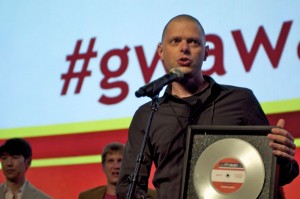 Zipline ran away with the prestigious title of Startup of the Year, with more than twice as many votes as the nearest competitor, and more votes than any other finalist in any category of the awards.

Todd Hooper’s latest project is looking to streamline mobile game development, making it simple to roll out new titles across major platforms such as Android, iOS and Windows Phone.  The well-known Seattle entrepreneur — also nominated in the Schmoozer category — snagged $400,000 in startup capital last summer from Benaroya Capital, Founder’s Co-op, Groundspeak and others.

More recently the company has seen an influx of business from game developers who have seen success on Kickstarter. 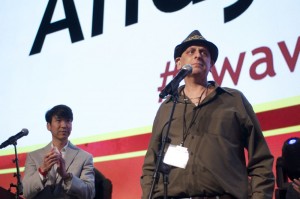 During the nomination process, we asked members of the community to submit wild card award nominations under the format, ____ deserves an award for_____.

The winner of this special category: Andy Sack, the People’s Choice for the “Iron Man of Startups,” who gave an emotional speech accepting the award, talking about his recent battle with cancer and thanking the Seattle tech community for their support.

Sack was recognized his roles both Founder’s Co-op, Lighter Capital, and TechStars Seattle.

He said this week that he plans to return full-time to his role of managing TechStars Seattle for the upcoming summer class. TechStars Seattle this week announced $1.5 million in new funding that will support up to 30 new companies over the next three years.

Congratulations to all the winners, and thanks to the hundreds of you who joined us at the EMP this evening for this one-of-a-kind awards event and party. Stay tuned for more coverage from the scene on GeekWire.

All photos by Annie Laurie Malarkey.