Bill Hilf spends his days as a general manager for Microsoft’s Windows Azure cloud computing platform, based in Redmond.

He spends his nights, weekends, vacations and spare moments running a program that uses basketball and other team sports to teach homeless and imprisoned kids in the Philippines about teamwork, friendship, commitment, trust and other values to improve their lives.

Yes, the Philippines — more than 6,000 miles away. And no, Hilf wouldn’t have believed it, either.

“This was not part of the plan,” he says.

His organization is called High Five Hope, and the story behind the name explains how it happened.

From IBM to Microsoft, to nonprofit

Hilf, a former leader of IBM’s Linux technical strategy, was recruited to Microsoft in 2004 to reshape the Redmond company’s approach to open-source software, working with Bill Gates and other Microsoft executives.

His arrival marked a more pragmatic approach for Microsoft, recognizing that its customers would inevitably use not only Windows but also Linux and other open-source technologies in their server rooms and data centers. 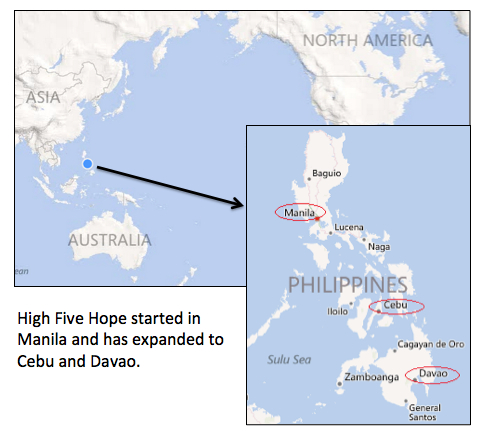 About four years later, Hilf was in Thailand for the Windows Server 2008 launch, part of a series of international events, when a friend who worked for the UN Refugee Agency encouraged him to visit a refugee camp many hours from Bangkok on the border of Thailand and Myanmar (formerly Burma).

Hilf was skeptical, and resistant, but he finally agreed to do it.

After traveling all day, he woke up in the camp the next morning and was told that the kids were excited to meet him. Cue the translation errors. It turned out that the last American to visit the camp was Angelina Jolie, who had built them a soccer field. With that as context, the kids first thought that Hilf was Angelina Jolie’s husband.

He had to explain that he was just a guy named Bill from Microsoft.

No, not that Bill from Microsoft.

So what could he do? There were no working computers at the camp. But there was basketball. Hilf is 6-foot-4, a former college basketball player with experience coaching his own kids’ teams. So he spent hours running drills with the kids at the camp, teaching them the fundamentals.

When he spotted a young girl trying hard and doing her best, barefoot and wearing hand-me-down clothes, he reached out to give her a high-five.

She had no idea what he was doing. It was a foreign ritual.

That’s when it hit him.

“That’s it, I’m teaching them the high-five,” he remembers thinking. “Before I leave, I’m going to be able to say, I brought the high-five to the jungle in Burma.”

So that’s what he did, having them run drills in figure-eights. The kids were giving each other high-fives and cracking up. He remembers, “It was a magical moment, to sit there in the jungle and see all of these kids running around high-fiving each other, and discovering the high-five.”

On the streets of the Philippines

With that experience in the back of his mind, Hilf returned to his speaking tour. On his next stop, in the Philippines, he took a run and ended up getting lost. He saw kids playing basketball in the mud, some using rolled-up and knotted clothes as an approximation of a ball.

So he found a sporting goods store, filled up three taxis with basketballs, and handed them out.

On the flight back over the Pacific, those experiences were in the back of his mind. When he got home, he told his wife, Shelley, that he was thinking about doing something with what he’d learned. He remembers thinking, “I bet you I could use sports as a tool here, a method, to help these kids.”

It had worked for him. Hilf’s oldest brother died when he was six, and his dad died when he was seven. He and his siblings were raised by a single mom in L.A. who worked multiple jobs. He was out of the house a lot.

And he played a lot of sports.

“Sports was the thing that kept me from going in the wrong direction,” he says. “Not just discipline but structure, confidence building, great teammates, support systems — trusting each other, but competing. All of these things come together in sports.”

Those sports were also good preparation for his life at Microsoft today.

“This is a sport. It really is,” he says, sitting in his office on the Microsoft campus on a recent afternoon. “This is a competitive arena, every day. Either amongst your peers or with your competitors.”

Starting up a nonprofit

Hilf had worked as an early employee at startups in Silicon Valley  before joining IBM, but he was never a founder. And he had no experience running a nonprofit. So he started cold-calling people with experience running sports charities, asking for advice.

He was consistently told not to try to create some worldwide project out of the gate. People who try that don’t succeed. He should target one area to see the biggest impact.

So he focused on the basketball-crazy Philippines, starting in Manila. Working on the ground in the country, he cold-called potential partners and gradually overcame the skepticism to build up the support he needed.

High Five Hope works in collaboration with local charities and non-governmental organizations in the Philippines. Those established programs are helping the kids survive, but the idea behind High Five Hope is to go beyond the basics “to help their spirit and their confidence and who they are inside,” Hilf explains.

Hilf has been at Microsoft for less than 10 years — he wasn’t there in the heyday of the employee stock option program — so he has a mortgage to pay and college to think about for his kids. Even though he has put much of his own money into the program, it’s not something that he can fund solely by himself. High Five Hope also relies on charitable contributions and the support of businesses in the Philippines and elsewhere.

The program operates over a three-month period, during the summer season in the Philippines, starting in April, with regular practices leading up to a big tournament. Hilf recruits volunteer coaches from local community groups and churches.

“I get a little Tony Robbins when I do these because it’s crucial that I have these coaches,” he says.

During regular practices, the coaches use drills to instill values such as trust, friendship or commitment.

Yes, it may sound hokey, Hilf concedes, but it works.

Thousands of kids are involved each year. High Five Hope started in Manila, then expanded to the boy’s prison in Cebu, and most recently to Davao, in the southern Philippines.

There are strict rules, including no drugs or fighting, and some kids are kicked out each year, but there are many more success stories, as the program helps kids who might otherwise get caught up in drugs or gangs or worse.

“If we can get just one or two of them out of that cycle, it’s worth all of it,” Hilf says.

A scholarship program is available to kids in the program who reach the age limit of 17, most often to help them finish high school. Some of the first participants in High Five Hope are now working as volunteers.

Hilf travels to the Philippines three to four times a year, using his vacation time. His wife is deeply involved, and his sons, now 9 and 11, have also traveled with him. Hilf says the biggest reward for him has been seeing the program open his sons’ eyes to the way small things can add up to make big differences in other people’s lives.

Geeks Who Give Back: For more, see this series we published in December about people from the Seattle region’s tech community doing innovative and inspiring work for a variety of causes.

Even better, Hilf’s sons now argue over which of them will ultimately take over the program from him.

He also has the support of Microsoft executives, who know that if they ever lose him, it’s likely to be to full-time work at High Five Hope vs. a Microsoft competitor.

One tradition at Microsoft, little known to the outside world, is a personality measurement tool that uses colors to help define people, aiming to help people understand each other and work better together. For example, someone whose tests show them to be blue-green is analytical with a sensitive side.

Traditionally, a lot of leaders at Microsoft are a hard-charging red, and for years that also defined Hilf.

About three years ago, after launching High Five Hope, getting involved with the kids in the Philippines, and starting to see the positive results, his test results showed his yellow score overtaking the red, indicating that he had become more sensitive and compassionate.

At first he couldn’t believe it. “This can’t be right!” he remembers thinking. “I can’t be a yellow! I struggled with it.”

But the reality is that his unlikely venture into philanthropy has changed his perspective.

“I know it sounds a little cheesy,” he says, “but when you see real human impact, particularly to some of the most underprivileged in the world, everything changes.”