What has Zipline Games co-founder Todd Hooper been building in the basement of Founder’s Co-op over the past few months? The Seattle entrepreneur — who previously co-founded Napera Networks and worked at WatchGuard — quite simply wants to change the way mobile games are developed. And his idea for doing that is a new platform called Moai.

Hooper, who has raised cash from Benaroya Capital and Founder’s Co-op, tells GeekWire that the open source platform allows developers to switch languages and architectures back and forth as they build games for the iPhone or Android. That’s a critical time saving element of the mobile game development process, he said.

“…They can focus on the game content that adds value instead of learning new languages and new ways to plumb architecture,” said Hooper. 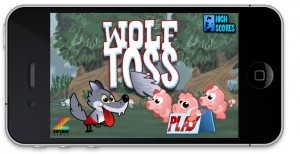 For example, Zipline recently used the platform to create its own game — one  similar to the blockbuster hit Angry Birds. Using Moai, Hooper said that the “Wolf Toss” game was built for the iPhone and Android with multiplayer functionality in about a week.

Moai works in conjunction with Lua, a popular scripting technology for games. There are plenty of competing game development platforms out there already, but most are “closed source” and very few are aimed at pro-level developers, Hooper said.

“On the cloud side, Heroku is an obvious parallel but to our knowledge nobody has built a gaming-centric platform,” he said. “Certainly nobody else has brought the whole mobile + cloud picture together for gaming like we have with Moai.”

The idea for the company came from co-founder Patrick Meehan, a graduate of the DigiPen Institute and the former head of mobile development at Groundspeak. At Groundspeak, Meehan helped develop the company’s award-winning iPhone application Geocaching.

That process introduced him to some of the challenges of mobile game development.

Meehan and Hooper have met with a number of game developers and installed the system at a few game studios, and so far the feedback they’ve received for Moai has been positive. Hooper declined to disclose partners, but Seattle area gaming veteran Jordan Weisman is one of the early adopters of Moai. (Weisman says that they are using Moai for his latest “stealth” mobile project).

The company also is working on a couple of its own titles utilizing the game development platform: Wolf Toss and Chronosaur. “It’s obviously a huge, booming space right now,” Hooper says.

Zipline now employs 10 people. Hooper declined to say how much they’ve raised to date, but a filing from last December indicated $150,000 of a $500,000 round had been raised.