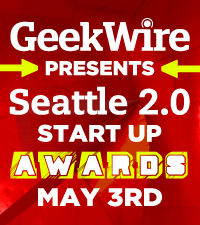 Even though it’s cheaper than ever to get a software or Internet company off the ground these days, money still matters. But the best investors bring more to the table than deep pockets, adding extra horsepower when startups need them the most.

Today’s featured category in the Seattle 2.0 Startup Awards is Investor of the Year, recognizing some of the best angels and VCs in the region.

This is one of more than a dozen categories in this year’s Awards program, presented by GeekWire. We’ll be featuring one category a day leading up to the big awards bash May 3 at the Experience Music Project. Public voting began last week after finalists were chosen by our judges from hundreds of nominations received from the community.

We’ve got a great group of finalists in this category, which is sponsored by Cooley. If you haven’t yet registered your vote, here’s your chance. If you need help deciding, see more background on each finalist below the poll.

Bill Bryant: A straight-talking angel investor and venture capitalist, the former Qpass, Netbot and Visio exec scored a nice win last year when Nuance Communications gobbled up Swype for $102.5 million. He’s also involved in some promising up-and-comers in the Seattle area, including Clipboard, Opscode and Z2Live.

Chris DeVore: The co-creator of Founder’s Co-op is attempting to reimagine angel investing in the Northwest. And with a portfolio that includes more than two dozen startups he’s off to a good start. DeVore and his partner Andy Sack received a big vote of confidence earlier this year when the firm announced a new $8 million fund, money they will use to bankroll about 20 new companies.

Geoff Entress: Seattle’s best known super angel, Entress — who at various points in his career has been affiliated with Madrona Venture Group, Voyager Capital and Founder’s Co-op — has his fingers in more startup deals than we can count. Some of his recent bets include Rover.com, Buuteeq, Walk Score, Banyan Branch and DNA Response. When people think about angel investing in Seattle, Entress’ name is usually the first to come up.

Andy Liu: A savvy poker player, Liu is placing some strategic bets on startup companies around the city even as he continues to run is own startup company:  BuddyTV. Even though he planned to slow his angel investing pace, Liu told us on the GeekWire podcast last month that he “upped his investment.” “I think it is a really exciting time to invest … and I look forward to doing some more,” he said.

Hadi Partovi: The former TellMe and Microsoft executive is a well-regarded angel, backing startups in both Seattle and Silicon Valley. His local investments include companies such as Thinkfuse, Familiar and PaperKarma, all of which have connections back to Partovi’s days running online music service iLike.

Watch for more featured categories in the days ahead. To cast your entire ballot now, see all of the Seattle 2.0 Startup Awards categories here.

Tickets are still available for the awards show on May 3rd, one party you won’t want to miss.