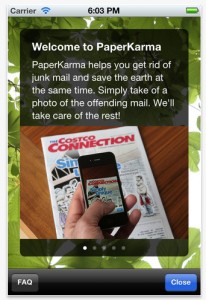 Most people absolutely hate receiving junk mail. But while the credit card offers, fashion catalogs and supermarket flyers pile up on the doorsteps of millions of Americans each day, one might think that there’s little hope to escape the clutter.

That was until now.

The free app, available on iPhone, Android and Windows Phone, is quite remarkable in that it allows recipients of junk mail to snap a photo of the flyer, catalog, magazine or other offer and, in a few simple clicks, unsubscribe from the distributor’s list.

“That’s it. Just snap your junk mail away,” notes a description of the app. The company’s motto: “Kill Junk Mail, Save Trees.”

There’s plenty of junk mail to eliminate, with estimates that each U.S. household receives 850 pieces of unwanted mail each year. And a number of other companies are looking to solve this pain point, namely Seattle upstarts Doxo and Earth Class Mail.

I was pretty amazed at just how simple PaperKarma was to use — so I followed up with Mortazavi to get a better idea of how it works.

“We’ve spent the past year building up a huge database of U.S. companies that send mail (of) all types,” notes Mortazavi, who holds a day job at Microsoft. “For each company, we’ve figured out who the privacy officer is, or who in customer service manages their so called ‘customer suppression list.’  So based on that we send the unsubscribe requests and thanks to FTC rules, they’re required to comply.”

A few months later, Mortazavi said that they follow up with users to make sure that the junk mailers are honoring the initial request.

I gave the service a try this week, and within 20 minutes I’d successfully unsubscribed from two pieces of junk mail that always seem to clog my mail box. (Goodbye, Dish Network and RedPlum). A third, a flyer from grocery store chain Albertson’s, failed to be eliminated because PaperKarma was unable “submit requests to this sender.”

Mortazavi said he came up with the idea after speaking to Seattle entrepreneur Hadi Partovi, an adviser to the company and avid junk mail foe. Prior to PaperKarma, Partovi collected names in an Excel spreadsheet of advertisers that sent him junk mail. The former Microsoft and iLike exec would then spend hours calling each company one-by-one asking to be removed from the lists. 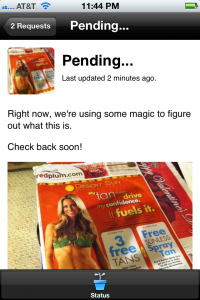 “The idea popped into my head that perhaps we could make this process less painful by enabling people to just snap pics of their junk mail and have someone take care of the rest of it,” said Mortazavi, adding that the environmental aspect of the idea really resonated with a lot of people.

At this point, Readbl, as the company is known, is bootstrapped with funds from the founders. Mortazavi is serving as CEO, while Ribera — a former software engineer at Jobster, iLike and Urbanspoon — is CTO.

Mortazavi said he may consider raising cash depending upon the reception to the idea.

Based on the fact that Americans on average spend about eight months of their lives dealing with unsolicited email, we’re thinking that reception will be pretty positive.