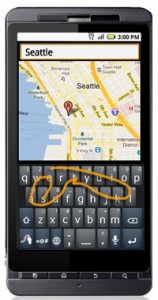 Nuance has agreed to purchase Seattle startup Swype for more than $100 million, according to GeekWire sources. The news was first reported in Uncrunched. We’ve reached out to executives of the company for comment, and will update the post as we learn more.

A GeekWire source with knowledge of the deal confirmed the acquisition, though we are still waiting for the official word.  We’ve also heard through sources that the deal will be announced first thing in the morning, with the price tag coming in at just under $105 million. [This post has been updated with additional information].

UPDATE 7:15 a.m.: According to a SEC filing, Nuance is paying $102.5 million. The deal includes a payment of $77.5 million at closing, and another $25 million on the eighteen month anniversary.

Swype, whose text-input technology for mobile phones has been installed on about 100 million devices, was founded by Cliff Kushler, who previously created Tegic’s T9 system, and Randy Marsden. Its CEO is Mike McSherry, who previously co-founded Amp’d and Boost Mobile.

Interestingly, Tegic was acquired by Nuance from AOL in 2007, though Kushler had already moved on from the company at that time. Nuance retains a large presence in Seattle’s Pioneer Square neighborhood, and has a similar product offering to Swype called Trace.

Swype is located just a few blocks away from Nuance, so it should be a pretty easy integration.

Swype had raised about $15 million, including a $2.5 million round in July from Seattle backers such as Ignition Partners and Benaroya Capital. Other investors included handset makers Samsung, Nokia and Docomo. It employs about 80 people.

Swype has been one of Seattle’s most high-profile success stories, with the company winning accolades and awards for its technology.

We chatted with Swype inventor Kushler at the Seattle 2.0 awards last year (pictured) in which he shared his vision for the technology, noting that it was originally conceived to help those with disabilities more easily input text on mobile devices.

The company has been expanding beyond mobile phones in recent months, with McSherry noting in March that it is having discussions with most major device makers.

“We think Swype works for anything that you would touch, point a remote control at, point a finger or head at and use gestures,” said McSherry.

Follow-up: Swype CEO on acquisition by Nuance: ‘It is a great outcome’