It’s never too early to mark your calendar for Emerald City Comicon, coming up in late March/early April 2012 — one of the landmark events on the Seattle geek’s annual calendar. Our latest Geek of the Week, Jim Demonakos, is not only the convention director, but he also founded a chain of comic book stores and is one of the guys behind the Kirby Krackle nerd rock band.

In other words, he’s living the dream. Continue reading for his answers to our questionnaire, and some geek inspiration.

Job, hobby and/or other geeky pursuit: I’m the Convention Director of the Emerald City Comicon, the Northwest’s premier comic book and pop culture convention. I am the founder of The Comic Stop chain of comic book retail stores (4 locations in the NW: U District, Redmond, Lynnwood and Everett), one half of the nerd rock band Kirby Krackle as well as an editor and writer (my first graphic novel debuts in February).

Coolest thing about what you do: I think it’s two-fold. The main one being that I get to be my own boss, wake up every day and work on all this stuff that satisfies my inner (and outer) geek. The other is getting to travel all over the world thanks to my work and my band. I travel at least monthly, most recently having just come back from a gig for Kirby Krackle in Australia, and I’m currently writing this on a plane on the way back to Seattle from Toronto. 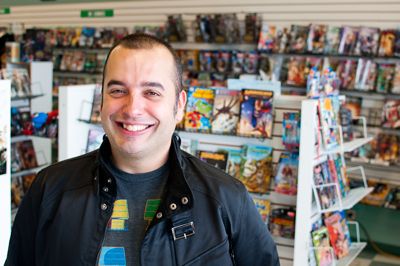 What does it mean to you to be a geek? To me, it means not being embarrassed about embracing your interests and sharing them with the world. I have no problem telling people what I do for a living, having turned my hobbies in to my profession, and not being afraid of other people judging me because I read comics, play video games, enjoy sci-fi and all the rest of the things that I love.

Geekiest things you’ve ever done, built, or worn: I usually like to do up a fun comic-themed costume for Halloween every year, my favorite being a Two-Face from a couple years ago.

Your best geek tip or trick for managing everyday work and life: I honestly resisted for a long time, but start using a calendar  especially one that syncs up with your smartphone – and start scheduling things. On a macro basis, you can schedule out your work day (like break up your time on email in to two chunks instead of all-the-time, so you have longer uninterrupted work sessions). Then, start putting social events on to it as well, from simple things like a dinner or drinks with friends, to weekly events (Tuesday night D&D, put it on your calendar!), you’ll be surprised how easily you can manage your time when you know exactly what’s going on in your life!

Kirk, Picard, Janeway or Sisko? You can’t argue that Captain Hawk… I mean Sisko, wasn’t pretty cool, Janeway was a good captain as well, and I grew up with Kirk, but the captain that made the most impact on me was definitely Picard.

Transporter, Time Machine or Cloak of Invisibility? Transporter for sure. With the amount of travel I do, both for business and pleasure, being able to instantly arrive to any destination near or far would be amazing. Bonus: no baggage fees!

If someone gave me $1 million to launch a startup, I would … create a clothing company that uses recycled materials as the basis for the clothes, making it affordable and sustainable, partnering with large brands to develop awareness and use a matching program to help provide clothing to children in developing nations. 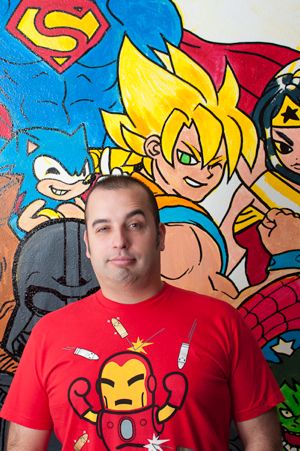 I once waited in line for … six hours, plus called in sick to work, to buy a Sega Dreamcast, then proceeded to play Tekken and Power Stone the entire day with my roommate.

Your geek role models: As a kid, I saw a VH1 behind the scenes on Weird Al, and I thought he was cool because he didn’t care what people thought of him, had an oddball image and made a career out of being a dork, and he was living in a nice big house which he clearly bought because he made funny songs unapologetically (which he continues to do). It definitely made an impression on me.

Greatest Game In History: The original 8-bit Super Mario Bros. Not only did I play it over and over, it was made in a way that left you with a different game play experience each time. Talk about a system seller, I played it a cousins house and then proceeded to bug my parents for a NES until I got one for Christmas. Plus the game STILL holds up!

Best Gadget Ever: Probably the iPod, it’s the gadget I’ve used the most and has changed the way I digest music. I’m not a huge Apple guy, but I have to say, the iPad is really growing on me for both work and play. I also can make an argument for the many iterations of the Gameboy in terms of gaming… too many cool gadgets to choose from!

First computer: Hewlett Packard 286x with 256k of RAM and something like a 150MB hard drive.

Favorite hangout: I tend to get hooked on neighborhoods and not single places, I’m kind of fluctuating between Ballard and West Seattle right now. Bonus: anywhere with a good burger and beer selection.

Favorite cause: I use my convention to help raise money for Seattle Children’s Hospital, my band just released an acoustic CD we recorded in Australia whose proceeds go to a koala sanctuary, and I support a number of organizations personally including The Red Cross, Oxfam and others.

Most important technology of 2011: The proliferation of social media, especially Twitter, as a news delivery agent. I think I’ve seen more things come up on my Twitter feed in the last year where that was where I heard them first before anywhere else.

Most important technology of 2015: I’m no futurist, but I feel by 2015, I hope someone will have innovated an interesting recycling technology, which will hopefully lead to something like decreased fuel consumption, increased clean water availability or even a reduction in creating post-consumer waste/garbage.

Words of advice for your fellow geeks: Don’t conform to stereotypes, be a social geek, learn social etiquette, be proactive in conversations, you’ll be surprised the response you get when you put yourself out there, it’s amazing how far just that will get you. Also, be proud of your geekery, plain and simple.