Microsoft on Wednesday introduced its next generation of hardware devices, with a pair of foldable, dual-screen devices headlining the event, in addition to refreshes of the company’s top gadgets.

After opening comments from CEO Satya Nadella, Microsoft’s hardware chief Panos Panay took the stage. He teased plenty of new innovations to a rousing ovation from fans in attendance.

“What you’ll hear today is about new platforms, new silicon and new form factors,” Panay said. “A new opportunity for you to pick the instrument that works best for you, the instrument that will get you into your flow. An entire new set of devices to move this collective symphony forward.”

Typically, these events allow companies like Microsoft to grab attention for its holiday hardware lineup. That was certainly the case here, but Microsoft also took the opportunity to pull back the curtain on a couple of devices that won’t be out for more than a year. Microsoft is embracing new “form factors” like foldable devices, and it wants to give developers time to get familiar with them to build apps and experiences.

With Surface we are reimagining every layer of the tech stack – from how we infuse AI from the silicon up, to device form factors and the role of operating systems – to put people at the center and empower them to create the world we want to live in. https://t.co/evyoCykBwV

Here is a look at everything Microsoft has announced today: 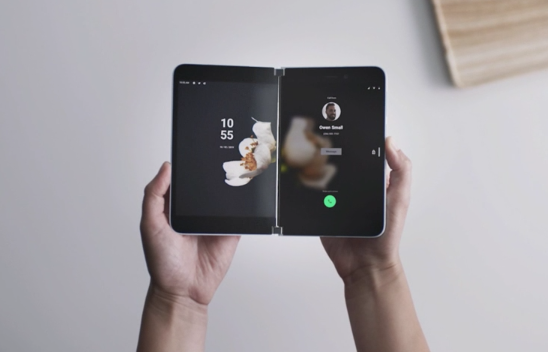 Rumors of the death of a foldable Surface smartphone were apparently greatly exaggerated. Microsoft unveiled Surface Duo, a foldable smartphone-tablet hybrid with a pair of 5.6 inch screens.

Microsoft is teaming up with Google to customize and Android operating system.

Surface Duo is powered by a Snapdragon 855 processor, per Wired. With a late 2020 release date, there are a lot of elements of the design haven’t been finalized yet — like whether it will have a rear camera. Microsoft has yet to release any pricing details.

The much-anticipated foldable Surface device finally saw the light of day. The new Surface Neo won’t be out until the 2020, but Microsoft wanted to show it now to give developers time to build apps and services for it.

A video for the device shows a pair of 9-inch screens separated by a hinge and a magnetic Surface Pen and keyboard that can go over the top of the bottom screen to give a more laptop-like experience. The screen orientation morphs in a number of different ways to fit a variety of uses.

“There’s truly nothing like this out there, nothing,” Panay said.

The device is powered by a new operating system, Windows 10X, that allows apps to jump across screens. Neo runs on what Panay called a brand new Intel Lakefield processor.

When users roll the keyboard onto the screen, the device recognizes and moves whatever apps were open on the bottom screen to the upper screen. Above the keyboard is a “wonder bar” that lets users draw on the device.

Following up on last year’s surprise Surface Headphones announcement, Microsoft today unveiled a pair of Surface Earbuds. Each earbud has touchable sensors to navigate music and calls, meaning users don’t have to take out their phones all the time.

The headphones feature 24 hours of battery life. It relies on Microsoft’s cloud capabilities to translate to different languages in real-time.

The headphones will be available later this year for $249.

The latest edition of Microsoft’s 2-in-1 Surface Pro tablet is 1.68 pounds with a 13-inch screen, with smaller bezels that allow it to maintain a 12-inch chassis.

It offers LTE connectivity and uses a new SQ1 chipset designed by Qualcomm and a redesigned graphics processing unit. As a result, it has three times more performance per watt than the Surface Pro 6, Panay said, with better battery life and a thinner design. It’s also the first Windows PC with an integrated AI engine.

Microsoft is introducing a 15-inch version of the device with USB-C, a frequently requested update from Surface Laptop users. And the battery re-charges to 80 percent in less than an hour, about the speed that a fast-charging smartphone supports today.

The seventh generation of Microsoft’s signature Surface device starting at $749. Microsoft also redesigned the Surface Pen to allow even more ability to markup screens, including a move that will satisfy a lot of fans, the ability to interact with Excel. And it too will have USB-C.

Observers were, to borrow a word from Microsoft’s marketing for the event, pumped. The Surface Duo especially drew a lot a lot of praise.

Ahead of Wednesday’s event, leaks shed light on some of the devices Microsoft may show. In recent days, images have surfaced — no pun intended — online, showing the Surface Pro 7, Surface Laptop 3 and an ARM-powered Surface.

The centerpiece of this week’s event could be a brand new device, the long-rumored foldable, dual-screen Surface. Last week, Windows Latest spotted a patent for a dual-screen device “thermal management control” to handle cooling of the gadget, the latest sign that Microsoft is continuing to refine the concept. A new operating system called Windows 10X could debut today to power the new foldable device.

Microsoft recently received a patent for a new portable speaker that could be used for meetings. Patent filings show a fabric-covered cylindrical device that resembles a Google Home Mini.

Many of the big tech companies have established annual hardware events in September and October, both to prepare for the busy holiday season and to set the table for devices expected to arrive the next year. We are less than a week removed from Amazon’s big event, where the tech giant unveiled a slate of Alexa-powered gadgets, that included a ring, glasses, earbuds and more.

Three weeks ago, Apple held its big hardware event, which included a refreshed lineup of the company’s top devices as well as new information on its game and TV streaming services. On Oct. 15, Google will hold its devices event, where it is expected to unveil the next-generation Pixel smartphone.