Editor’s note: Read on for our real-time updates from Amazon’s event. The company published its own rundown of the products announced today at its blog and via press release.

This is a surprise: Alexa eyeglasses.

Dave Limp, Amazon’s hardware exec, was wearing the new “Echo Frames” during the entire presentation. They come with built-in mics and a small speaker so you can access Alexa on-the-go, similar to the Buds. Priced at $179.99.

And another surprise: Amazon introduces Echo Loop, a smart ring for $129.99. It comes with a speaker and mic as well.

The Loop and Frames are part of a new “Day 1 Edition” program for experimental products. 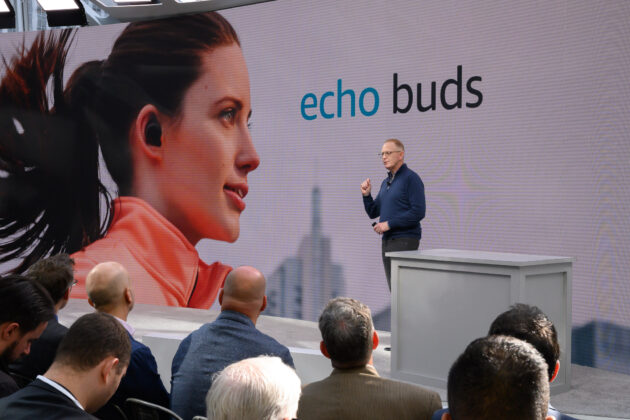 Amazon waited until the end of the event to reveal what earlier reports hinted at: Echo Buds, priced at $129.99, compatible with Siri and Google Assistant, in addition to Alexa. The price point undercuts Apple’s AirPods, which debuted more than two years ago and range from $159 to $199.

Here they are, the Echo Buds, just announced. Follow this thread for details. pic.twitter.com/nXFztw7YKN

And now what we’ve all been waiting for…the Amazon Smart Oven.

From smart cooking appliances to “Amazon Sidewalk,” a new low-bandwidth network to lengthen the distance of your smart home devices.

"Amazon Sidewalk" IoT protocol will use 900 MHz spectrum to enable long-range applications such as geofencing yard and tracking dog around neighborhood. pic.twitter.com/DE3F0Bpe6d

And there’s a new product rolling out next year called “Fetch,” a smart dog tag that works with Sidewalk to help track down your pet. 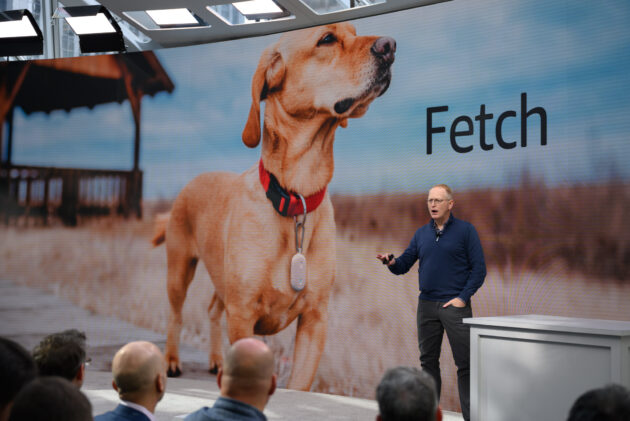 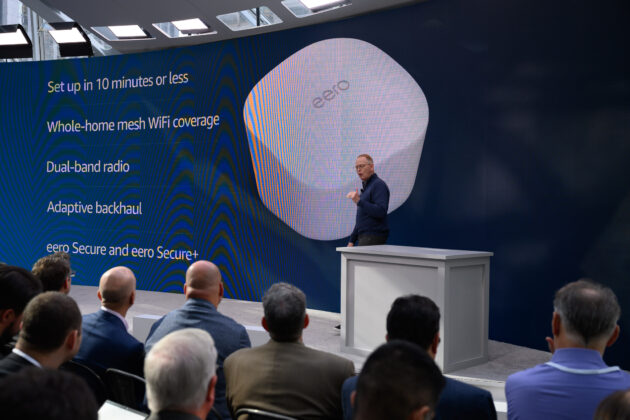 Ring doorbells will get Alexa built in to interact with visitors at the door on your behalf, when you're not home … or, of course, when you're hiding from the neighbors in the basement. pic.twitter.com/IniXA3vJBG

More Ring: a new Ring Indoor Cam is the company’s first indoor-only camera. It’s also the cheapest Ring security camera to date, selling at $59.99 and available for preorder today. There’s also the new “Stick Up Cam” for $99.99, and a DIY retrofit kit for old alarm systems.

Another smart home announcement: Amazon unveiled Certified for Humans, a new program “that identifies devices that are struggle-free, tinker-free, and stress-free—no patience needed to get these installed.”

Echo Glow — this is a new $29.99 device that looks like a small color-changing ball targeted at kids. 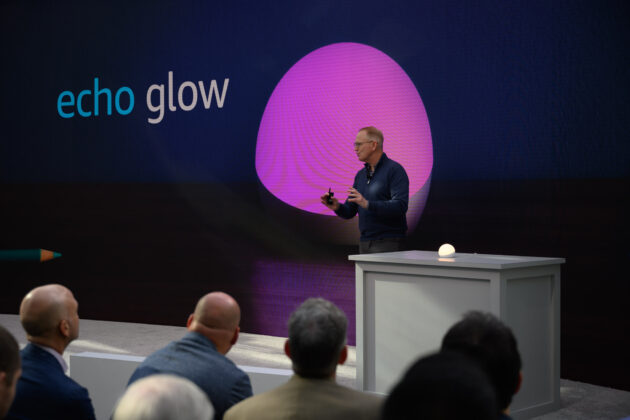 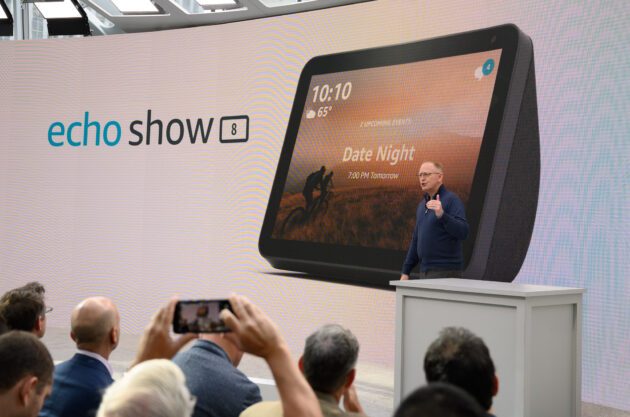 Amazon introduced the new Echo Show 8 with an 8-inch HD display and a privacy shutter, priced at $129.99 with preorders starting today. It sits in between the 10.1-inch Echo Show and the 5.5-inch version. There’s a new service called Food Network Kitchen that is coming to Alexa. Celebrity chef Bobby Flay showed up on a call. 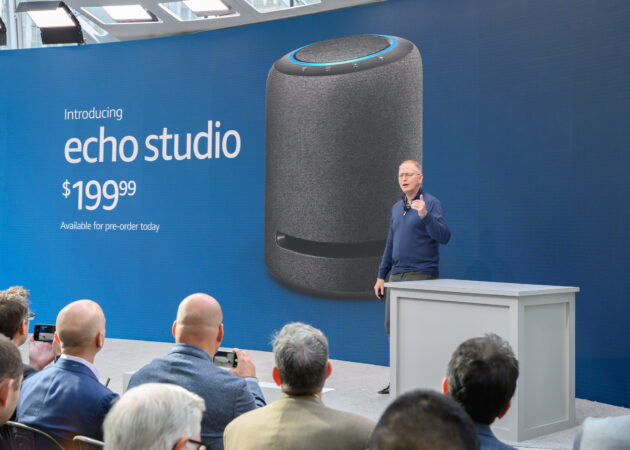 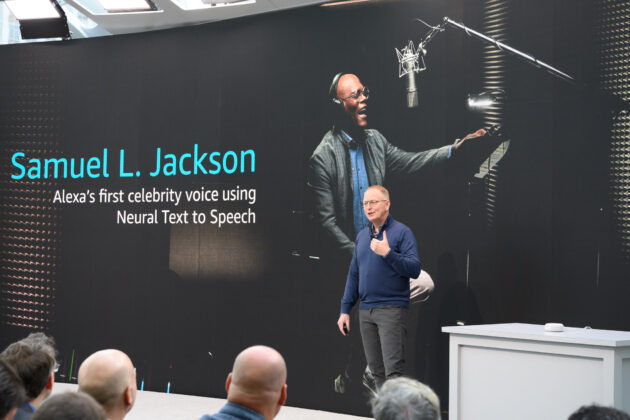 Amazon is using neural text-to-speech to make Alexa more fluid and natural. Alexa will use a “newscaster” voice when reading news and can now respond in celebrity voices. Samuel L. Jackson is the first celebrity whose voice will be available as an alternative in the Alexa voice interface, for a 99-cent upgrade. Alexa will be able to also detect frustration.

Alexa voice upgrades, before and after, introduced by Amazon devices and services chief Dave Limp at the company's event in Seattle just now. Part of larger effort to make Alexa more fluid and natural. pic.twitter.com/uFd9dKUuDH

Alexa will soon know when you're frustrated with her. pic.twitter.com/YFah4GuUkZ 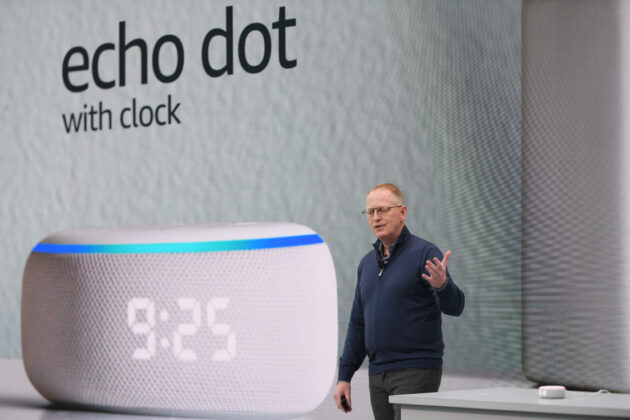 Amazon’s first new product: an Echo Dot with a clock, priced at $59.99 with pre-orders starting today. The previous Echo Dot will still be available.

Amazon kicked off the event by showing the draft 2011 press release for the original Alexa, then codenamed Doppler. Privacy was also front-and-center from the beginning.

Amazon announced that it will allow customers to automatically delete voice recordings after three or 18 months.

Two new questions that customers will be able to ask Alexa: Why did you do that? Tell me what you heard? Company also enabling new ability to delete recordings on a rolling basis. pic.twitter.com/5BFUP6wQ8M

9:50 a.m.: GeekWire is live on the ground at Amazon HQ in Seattle today where the tech giant is hosting a media event to show off its new and updated gadgets. Things get rolling at 10 a.m. PT and we’ll update this post as news is announced.

Amazon held a similar event last year when it unveiled more than a dozen new devices, putting Alexa into everything from microwaves to sound systems to car dashboards. Alexa will surely be in the spotlight again this year.

Here’s one thing we didn’t expect: a twerking bear.

Just what every home needs, right? A twerking bear that works with Amazon’s Alexa. pic.twitter.com/b46cZwJi94