With tech giants such as Adobe, Salesforce, and Oracle entering the ring, Seattle startup Amperity is raising more investment dollars as it tries to grab market share in the nascent field of customer data platforms.

Tiger Global, a New York-based firm known globally for making long-term investments in companies including Spotify, Facebook, LinkedIn, Flipkart, and others, also led the company’s $28 million Series B round in October 2017.

The fresh cash will help Amperity invest in sales and further develop its technology that helps companies fine-tune their targeted marketing campaigns by connecting disparate data sources about individual customer habits from across the internet.

The startup ingests trillions of data points from a single customer — via emails, purchase history, mobile app usage, website traffic, physical store visits, etc. — and crunches that information with machine learning to give marketers a holistic understanding of a given user. 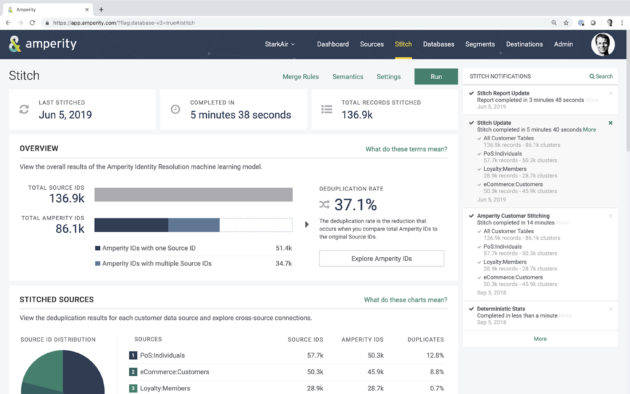 Brands such as Gap, Brooks Running, Alaska Airlines, and others are among Amperity’s clients. The company recently rolled out an update that gives customers more control of how they manipulate the data that Amperity helps gather.

“We knew it was the right time to really put fuel behind our conviction,” Amperity CEO Kabir Shahani said of raising more investment. He said the company, which is unprofitable, has “plenty of cash” and revenue outperformed expectations last year.

Amperity is far from the only company building out customer data platform tech.

There are more than 80 competing vendors, said Lizzy Foo Kune, a Gartner analyst who specializes in customer data management solutions. That group includes a bevy of startups such as fellow Seattle startup Usermind and Portland, Ore.-based Lytics.

There are also marketing behemoths including Salesforce, which is piloting its own customer data platform, Customer 360, later this year. Oracle has CX Unity, which launched in October, while Adobe globally released its “Customer Experience Platform” in April.

Shahani said he “absolutely expected” those giants to roll out their own competing products. But he said Amperity has a head start.

“It is a highly coveted space that has significant customer pain,” Shahani said. “We have ambition to be the dominant player — we think we already are. We have more customers and higher quality customers than anyone else that’s trying to think about this problem. We want to keep that lead.”

Shahani said Amperity differentiates itself with how it assembles data and helps companies act upon the information.

“When you plug Amperity in, everything gets better on Day 1,” he said. “That is a really powerful value proposition, particularly when it actually works.”

Foo Kune described the customer data platform industry as “frenzied” and one that she expects to change “drastically” over the next 18 months. M&A activity is already heating up — Leadspace acquired ReachForce last week, for example.

The companies that get ahead will go beyond simply unifying data and more into predictive features that make recommendations to marketers, Foo Kune said.

“The data collection and the profile unification features aren’t special enough to differentiate on,” she said. “We already see a lot of parity in a rather young market on that front.”

Shahani and Amperity co-founder Derek Slager previously started Appature and sold the Seattle-based healthcare marketing company to IMS Health in 2013. Appature raised less than $10 million during its lifetime, so the Amperity journey is already vastly different for the entrepreneurs.

“This is about putting money where your mouth is,” Shahani said. “It’s about the conviction we have in the team; in the product we’ve built; and in the quality of customers. This is not a lightweight capability that sits on the outside of how our customers think about their business. This is foundational in so many ways.”

The new funding will be used to pursue more verticals such as financial services, automotive, insurance, and healthcare. Amperity’s current customers are in the retail, travel, and hospitality industries.

Amperity has partnerships with companies such as Microsoft, Slalom, and AWS.

Amperity, a finalist for Startup of the Year at the GeekWire Awards, employs 120 and expects to reach 175 people by the end of 2019. It recently hired its first chief marketing officer, Lynn Girotto, who was most recently senior vice president of marketing at Tableau Software, and brought on former Facebook leader Aria Haghighi as head of data science.